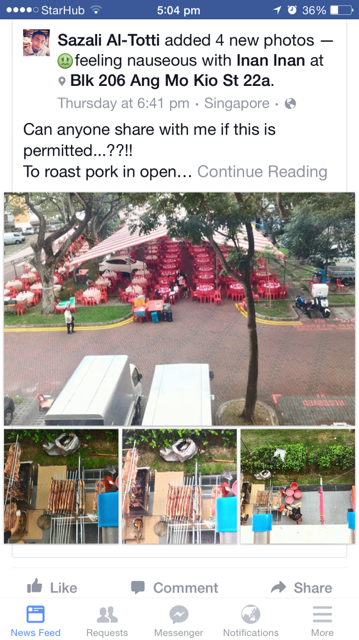 A Singaporean by the name of Sazali Al'Toti was ranting about a large scale event taking place at the carpark facing his flat's window. His main gripe about it was that they were roasting PORK out in the open while he was fasting (during Ramadan). And he wanted NEA/Town Council/MUIS/anyone on Facebook to tell him if roasting pork out in the open was permitted. Bahahhahahaha... no la Sazali, if someone roasts pork out in the open in Singapore, they will be sent to jail!!!! 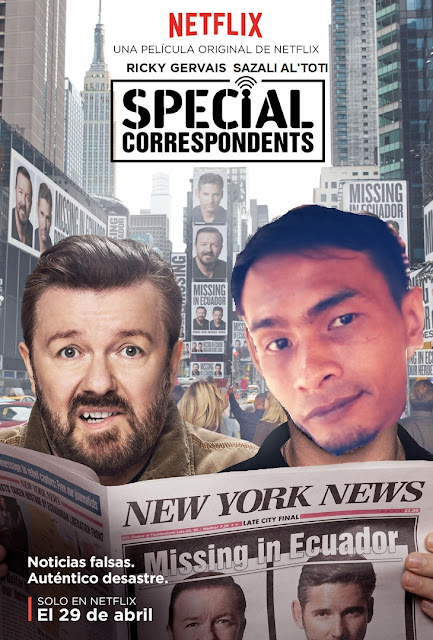 Well anyway, I checked his newsfeed throughout the day, and man was he obsessive about it. I can just imagine him at home, looking out the window every few minutes... getting more and more riled up that he isn't seeing squad cars and riot control vehicles there to shut this operation right down pronto!
﻿ 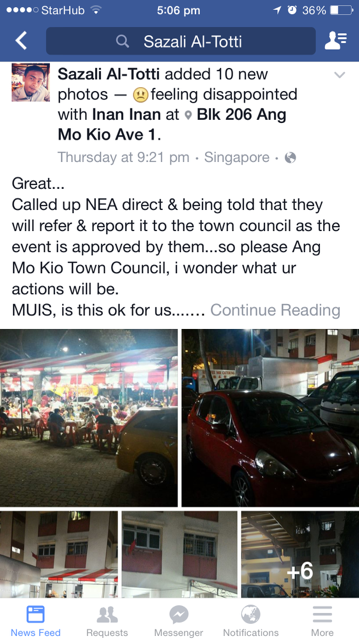 And he would update with a slew of pictures as well along with his racist commentary. He must have thought he was like some Special Correspondent of Ang Mo Kio. 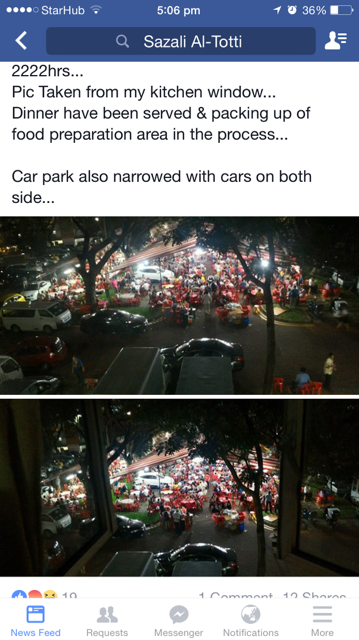 Then when no one took action about the pork issue. He complained about the carpark being narrowed because too many cars. Give and take lah brother. We live in a multiracial society. This is a one off event that lasts a few hours. You tengah puasa kan? Sabah sikit tak boleh?
Every Friday throughout the year (and every day during Ramadan), the street leading up to where I lived (in Pasir Ris) would also get narrowed down because of illegal parking on the street leading up to the mosque. The worshippers park close to the mosque to go in and pray. If I'm heading back around that time and I remember, I will tell my cab driver to take a different route. When I do forget, then I'll have an extra squeazy and slightly slower ride home when on that street. That's all. It doesn't even anger or frustrate me. I don't go suggesting that they traffic police come and saman all of them, or that they should not be lazy and park at the mall nearby or at downtown east and then walk/take bus to the mosque or pay for carpark space at the HDB estates close by. And I sure as hell don't call up town council to complain or take pictures and spread bitterness on FB. It's a few hours on a Friday. What harm is that. So I just don't sweat it. ﻿ 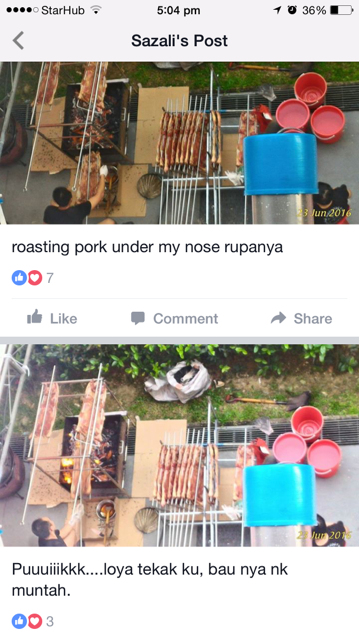 To be honest though I do find it disgusting to be cooking food like that, by the drains. But my disgust has nothing to do with it being pork. I'm disgusted when I see void deck food prep for Malay weddings or other events as well. But I wouldn't be bothered to the point of becoming some Special Correspondent snapping away furiously at the scene or call up government agencies to complain. Afterall, they are NOT FORCING ME TO EAT IT WHATTTT.
Same goes for you Sazali, shut your windows if the sight and smell disgusts you. They're not asking you to eat it. It's not Haram or against your religion to be around someone eating or cooking pork right?﻿ 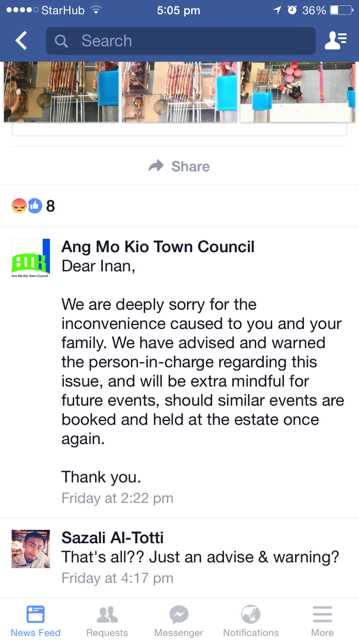 I wonder what he was expecting Ang Mo Kio town coucil to do... like punish the organisers or compensate him or something? Maybe Sazali, instead of saying "That's all?? Just an advise & warning?" , you could suggest 'action' they should take.﻿

If you're on Facebook, go and look at his threads. Especially the comments... both for and against his cause. Hilarious.