on April 23, 2015
I saw this Chris Crocker video on my Facebook newsfeed yesterday. Apart from the drama queen over reactions (which I don't mind at all, it's a good laugh), I agree with what he says in this video.

Then I immediately sent it to a friend of mine because she was just telling me last week about how her husband always likes photos of pretty girls on Instagram, and would even leave nice and flattering comments for them. My friend is not the jealous type (unlike me lol)... so obviously he was doing this on a scale that was large enough to alarm her. She did mention it to him once, and he got defensive and said she was paranoid checking up on him, controlling him when he's doing nothing wrong. 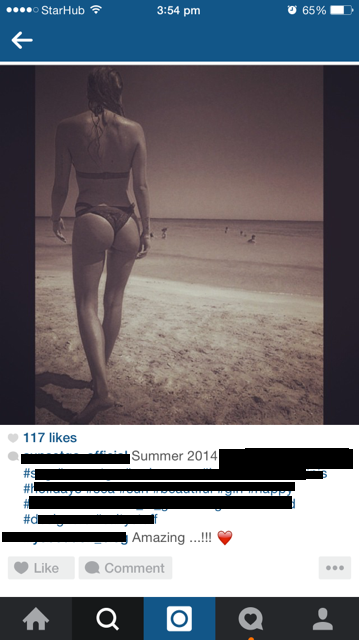 I went to see... and yep, if he liked a sexy friend's instagram photo.. and you click on her profile, he had indeed clicked LIKE on EVERY SINGLE PICTURE of hers. I'm like WTF, you don't even bother clicking Like on your own wife & kids photos lah. 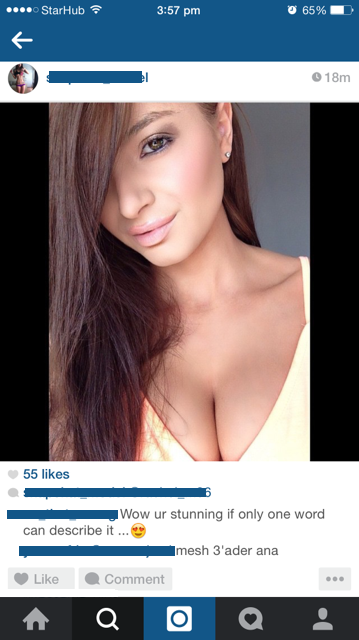 Well, anyway, we came to the conclusion that he's just one of those people who craves the attention of attractive people of the opposite sex. Like, we don't think this is going to lead to him cheating because, most of the girls he commented on, just ignored him. Even when his comments were in the form of questions... for example (I'm making this one up, because if i put the actual question, and he stumbles upon this blogpost, he will know I'm talking about him, then he will be pissed with his wife).. so, example "Wow! What a hot body you have. Do you work out?"

And yeah... after that *crickets*

So we decided, she should just keep an eye on his IG activity, but the problem is unlikely to escalate to like... infidelity. (Though honestly, even at this 'harmless' level of perving, I find it damn disrespectful). You can see all the sexy IG girls pics you want, no one would even know.. but if you don't click Like, or don't leave a flirty comment.. will die is it?!

It has occurred to me.... that this kind of activity today, is really just a modern and social media savvy version of that classic  Roving Male Eye (click to read) .

When you're in a relationship. If one would find it disrespectful to do an obvious double take and stare at a woman (or man) that they find attractive.... isn't it the same when he or she checks out Instagram pics of people they find attractive and then liking them or writing compliments in the comments section? It's exactly like having a roving eye. Isn't it? Heck it's not even discreet because every one can see your activity. Asshole.

P/S- on a side note, someone should Dubsmash Chris Crocker.

Lala said…
Hey Holly, this is an interesting blogpost. Yeah, I am not a jealous kind of person at all, but if someone I am committed to does things like this, I find it to be disrespectful. Not like the gorgeous ladies with self-respect would give that guy the time of the day, but it just doesn't feel right. It's like giving wolf whistles to strangers while he's holding hands with me. Thankfully I have not encountered such men whom I have dated, so it's all good. Will cross the bridge when I get there, but hopefully I won't end up with someone like that! *fingers crossed* :D
9:01 pm

Anonymous said…
I've often wondered about this. I had asked once (of a guy), "Why do you have to go and like the profile/pictures? Can't you just quietly admire and appreciate and then let it be?" I was shot back with "Would you rather not know that I look and I do it all on the sly, then for me to be 'frank/open' and 'honest' so that you know about it?" I pretty sure he twisted the argument in there, but I just can't wrap my head around it. Ugh... a******....
12:36 am

Holly Jean said…
Hahaa yeah I think he did twist it. The way I see it... As someone told me once... "Just because you're honest and open about it, doesn't make it right. " (this was when I was multi dating many guys at a time , and each one was aware that it wasn't exclusive. But I did end up hurting some of them).
11:19 am

Holly Jean said…
You know, I did tell my friend not to worry because it's not like the girls were responding to any of his flattery. And I said anyway he's married with kids, girls will be put off by his perving. Then she said no la, actually some girls like it.. And it's an ego thing when they can 'hook' a married man. 😳

Good thing is , not all men are like that. Mine isn't at all like that. BUT I have a whole different set of problems with him. Lol. No one is perfect I guess. Got to choose the one with flaws you can accept.
11:23 am