on July 02, 2007
The Roving Male Eye [RME]... is almost a reflex action for most men. Habit that's been in-grained since young (usually by watching the father's behaviour/ or close peers). 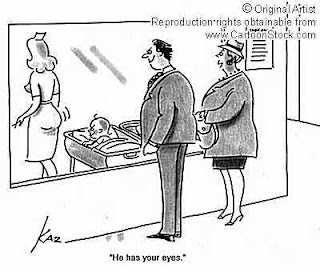 Well... I have friends with RME and I never mind it. But when a BF has RME I would find it insulting. Why? Because there's an emotional involvement between the two and when the eye roves, it's a blatant signal that your existence and presence is not good enough. If you pick someone to be exclusive and special.. don't you think that he should be just that??? Otherwise, just have him as a fuck-buddy or something.

In relationships, the shitty truth is that no matter how truly wonderful he might be in other ways, at some point you will have to confront RME. And if you're emotionally involved with the man – it's going to hurt. It's a lack of respect and such a disappointment.

So what should you do?
Ask him how he would react if you did the same and state that it makes you look like a fool in front of others. If his excuse is that he can't help it, that's a cowardly excuse, point out that he's a grown-up and should be in control of his behaviour. If he cares for you, he will understand and try to control his RME.

If that doesn't work... (which I'm quite sure it won't because men tend not to work on things they find harmless to themselves. That's why half the time when the relationship fails, they have no clue how it got to that point.).

You need to get even. After you've talked to him about it (possibly numerous times), he continues to check out other women in your plain sight, then give him a taste of his own medicine.

Make flirty eye contact with other men, do the head turn or eyeball swivel ( worse still... act like you're trying to make it discreet but failed), pass appreciative comments, hang on their every word, laugh at their jokes… you get the idea.

When he asks you about it just a vague, 'Sorry darling, what was that?', should get him making a bit of a fuss. And at this point you should point out his insecurities, trivialise the whole matter by laughing and say it doesn't mean anything and he's the one you really want.

This should sound familiar to him and the lesson should be learnt, if not the first time, then definitely after two or three occasions. Meanwhile, enjoy the flirting (might as well... you never know what might come out of it) and if the RME is still not gone… make sure you are.

Death Walker said…
Whatever gave anyone the idea that a male will stop looking at women when he has declared himself exclusive?

If he is rubber necking, then you have a valid bone to pick.

Then again if the guy is NOT sensitive to his partner's feelings, he then is a complete phalic cranium.

I do suggest training, if he RMEs then no.... you fill in the blank.

If he does not respond to training, then you need to do the "Sit down and talk about our future" thing.
4:16 am

Anonymous said…
bad idea to withold sex.... why make yourself suffer too
7:20 am