Was it worth human lives? #JeSuisCharlie

on January 10, 2015
Last Wednesday morning, the French satirical paper Charlie Hebdo was attacked by three gunmen who killed ten of its staff and two police officers. They claimed to be from Al-Qaeda and avenging their Prophet. 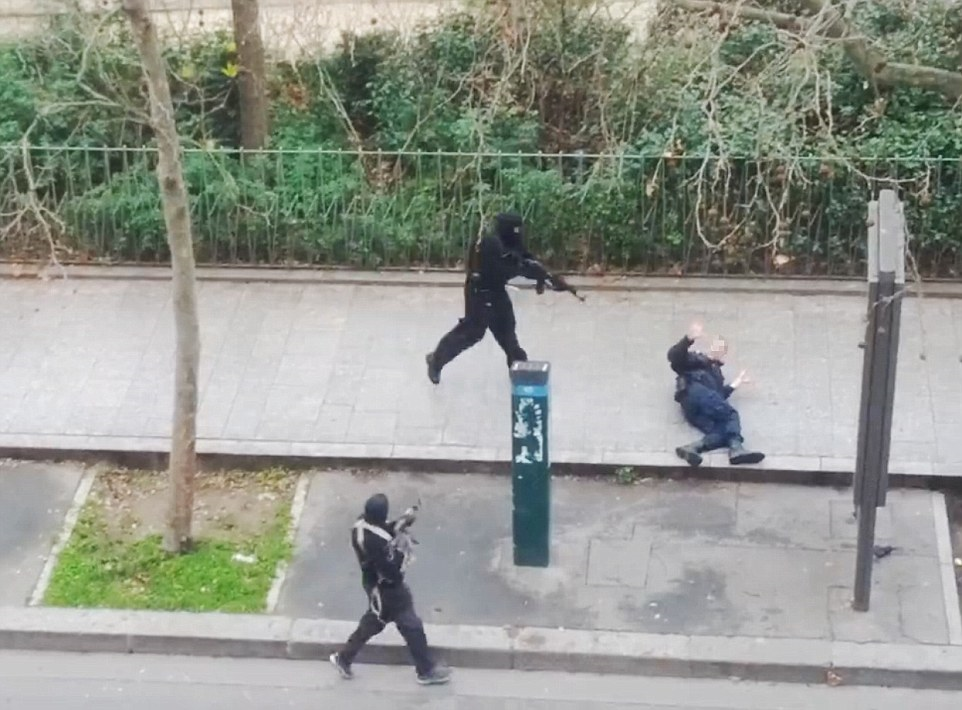 All this because of comics?!

Cartoonists intentionally get right up to the border of offensive. They deliberately make people feel uncomfortable. If you feel offended with what you are seeing, don't you live in a society where you are able to articulate a peaceful response to it. You can boycott the magazine. But just because you are not amused by it doesn't mean that no one else is allowed to be amused.

I've never bothered about Charlie Hebdo cartoons because I don't understand French. But since this act of terror, I Googled these cartoons... to see what all this was about. 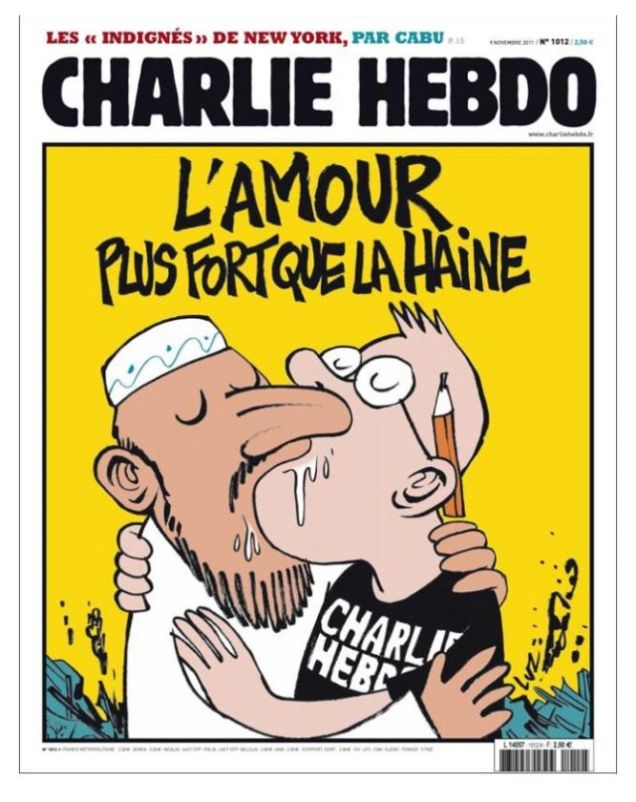 ﻿
Love is stronger than hate. Obviously kinda like a shitty insincere apology for joking about Islam (?). Not funny. I'm not sure though if I'm not amused because it's 2 men kissing so slobberishly. I'm not usually homophobic but this looks gross. 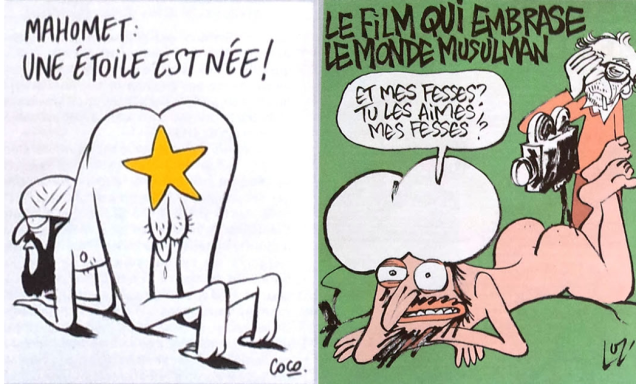 Okay this one is so fucking not funny. But also, I wouldn't have known this was a holy Prophet. I would probably think it was some camel humping type dude from the middle east. Also not funny to me, but my sense of humour is pretty limited to begin with lol.

I did enjoy other cartoonists' responses to this Charlie Hebdo massacre more than any Charlie Hebdo comics I've seen so far. Especially God at the pearly gates smacking his head because the Charlie Hebdo cartoonists were there. Haha.. here comes trouble! It also made me smile because it didn't give the image of bloodshed, pain or suffering, rather they looked happy, together and walking in to a new adventure. Heyyyy Big Guy, we're here! 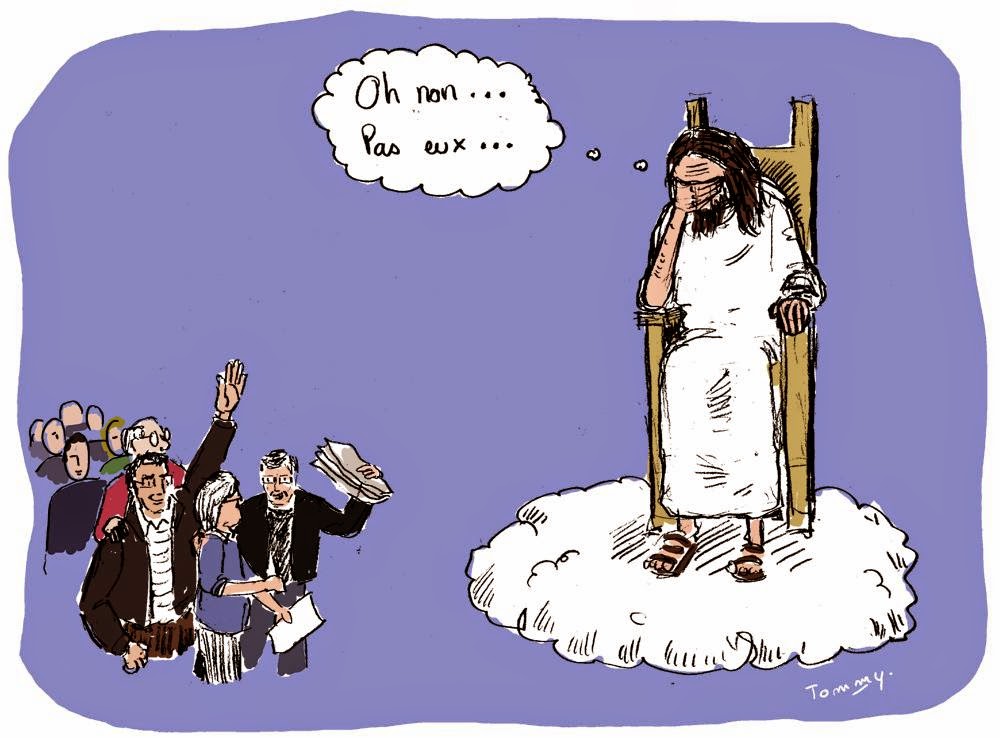 ﻿
Charlie Hebdo also poked fun at pretty much every other religion out there. Including my own. ﻿
This came out on Christmas. The birth of Christ. 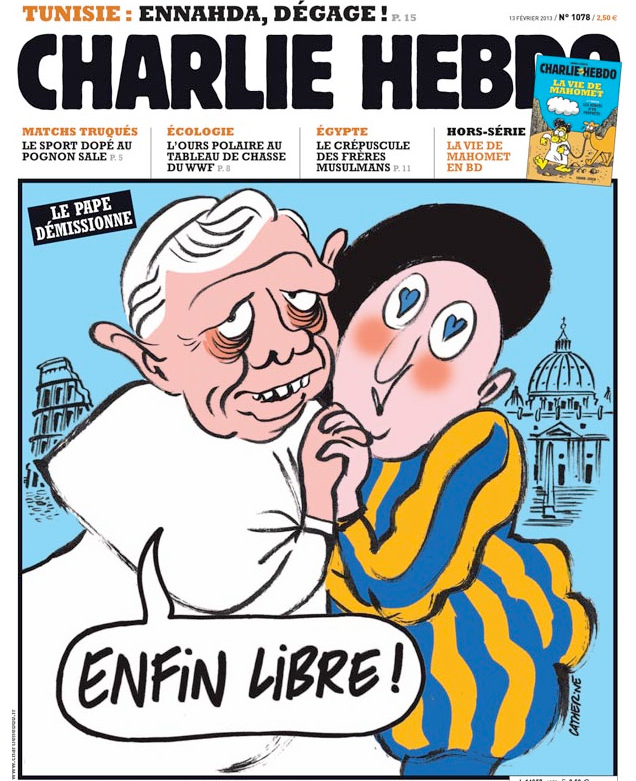 Free at last. Is this about homosexuality and the Catholic church? Don't know, I'm not in stitches over it but I'm definitely not insulted either.

The thing is... You know when you're in primary school and there's always that one loner kid no other kids want to play around with because every little thing they will start crying out loudly, or tell mummy, or tell the teacher and get you in trouble? What did u do? Let them be outcast. Don't play with them. It's just not worth it right?

I believe (I mean its obvious) Charlie Hebdo knew that a significant number of Muslims were not being good sports with the satire about the Prophet. So why didn't they just drop it instead of rubbing it in!!! 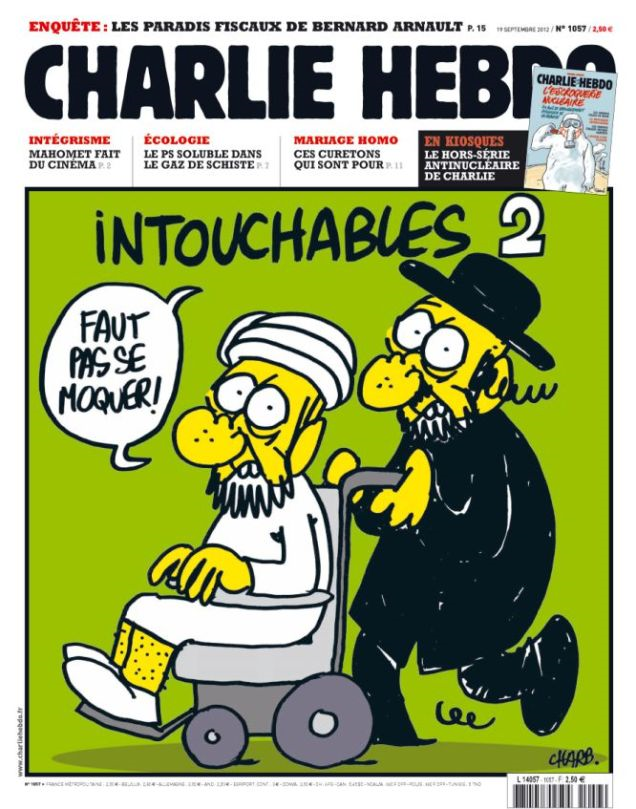 ﻿
Untouchables. Jew and Muslim saying we can't be mocked. 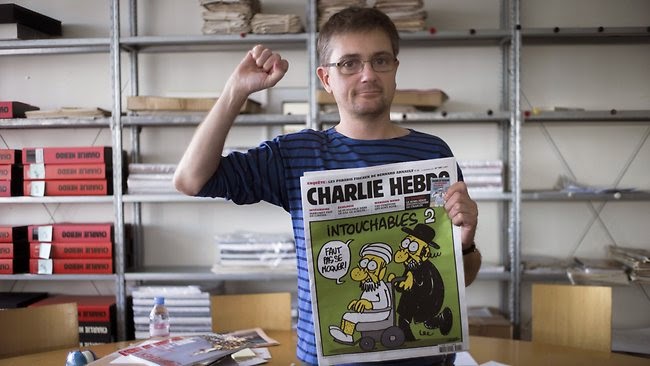 And in the past there were already vicious attacks on Charlie hebdo offices (fire bomb etc) because of their cartoons about Muslims. Charlie Hebdo! There's Plenty of fodder for your satire in this world. Why play with fire like that. I feel that your comics generated unnecessary social tension and discord.

Freedom of speech is not free. It came at a price. The extremists' barbaric actions have brought more harm to society than Charlie Hebdo's ink ever did. :(

I know that Islam is a peace loving religion promoting tolerance, love and kindness. And I know a few extremist bad eggs, don't represent the religion. But I can't help that every time I hear "Allahu Akbar!" shouted out, I associate it with gunmen in balaclavas, heads being lopped off innocent men and merciless mauling. Isn't Allahu Akbar supposed to be a respectful and holy phrase?

Let's say I was in a mall or something and I heard someone shouting that around the corner, I would shit myself and run the other way... because I associate that phrase with murder. I'm sorry I feel that way, I'm sure I'm not the only one. :(

P/S update:14Jan
And I can't believe that Charlie Hebdo decided to print another Mohamed cartoon just that Wednesday after the terror attack. That's not about "freedom of speech" that's about being a petulant child who still insists on having the last word. Dudes, don't aggravate the situation and be the cause of more social tension amongst people. Don't be the cause of the next massacre, we already know we are not dealing with sane/rational ppl, they are extremists.... Why risk innocent human lives for that. Go draw something else. The world goes on.