The Rise Of The Cougar

on February 07, 2010
This week, on MyFatPocket, my column is on the trend of older women dating younger men.
The Rise Of The Cougar! 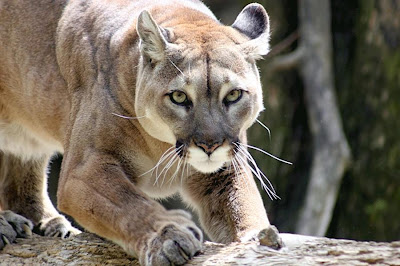 My latest obsession is watching episode after episode of Cougar Town. A newly single 40 something Courtney Cox is thrown back into the dating game and realises that hey, young men find her hot! And that is what brought about today's topic – The Rise of The Cougar!
The term cougar has always been around. But in the past, a cougar was stereotypically a woman with big hair, who wore leopard print leotards two sizes too small and bright red lipstick. Cougar used to be a derogatory term for an older woman trying too hard to be sexy and preying on innocent young men.
But with the emergence of more celebrity cougars (Demi Moore, Susan Sarandon) and the Mrs Robinson character type emerging from fantasy to mainstream, the word cougar has been reclaimed. Its new meaning is a powerful, confident, independent woman of maturity, who appeals to men in their early to mid 20s!
So, if you're fed up with dating men your age (or older) and want to widen your catchment area, now's the time to check out that younger man!
The benefits of dating a younger man
1. Sex!!! Yes, he may be less experienced than what you're used to, but a young prey is an eager learner and will go all out to please you in bed. Bear in mind that women reach their sexual peak later in life, so a younger partner will have the stamina his older counterparts lack.
2. Looks. Now who isn't attracted to a healthy, tanned athletic 20-something body with nice abs?
3. Less Baggage. A younger man will probably be less jaded and cynical about love than an older man who has gone through a messy divorce or had many failed relationships.
4. Revitalising. Younger men are more spontaneous, energetic and daring. Very often, they are experiencing things for the first time, and for an older woman, a young man can be a breath of fresh air by adding a new perspective on things.
5. Biology. Women live much longer than men and an older woman may want someone who can keep up with her as she ages. Women now are also able to take better care of themselves (beauty products, surgery, etc) than in the past.
Although I'm not dating a younger man (at the moment), I'm encouraged to see that there are women out there who are confident enough to break social norms and go after what they want. Age is just a number and they're not going to let it get in the way. Kudos to the rise of the cougar!

girl with the sexy roar said…
Hey Holly. I made a comment on one of your older posts about my dating a guy 7 years my junior. Haha..I felt so connected to this post!
7:38 am

Holly Jean said…
@girl with the sexy roar- Yes, I do remember!

:) I shld have emailed u for feedback and ur personal P.O.V and experience before writing this piece!
1:02 pm

Anonymous said…
finally roles are reversed! Or rather shared... what irks me is that people term a woman "cougar" if the guy she is dating is only 4-5 years younger. That is ridiculous, make it at least a 10 year gap!

Way to go Demi Moore, Madonna! Btw Madonna has broken up with Jesus but she's dating someone as young too..and he's even hotter! Who says women with power can't have it all?
11:11 pm

Beyondcougar said…
All very good and valid points Holly, but not all of us like the term 'cougar' - it leaves the impression that we are always the hunters and never the hunted - which patently isn't true!

But overall - hurrah for younger men! :)

Anonymous said…
I think this term cougar is fine to use now. Despite it starting out as an abusive term, women are taking it back an positively identifying with it; just look at all the women on http://www.cougared.com! I say good luck to them.
9:38 pm