Brought MJ to the hair salon twice so far for a hair cut, both times he screamed and cried damn loudly... like they're trying to murder him. Even though they were actually very patient and gentle  -_-   . MJ is just that kind of toddler. 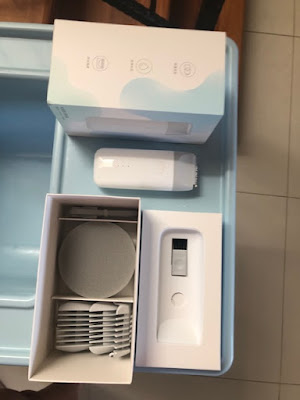 So, I got the XIAOMI MITU Baby Hair Clipper online and decided to cut his hair myself. This has a silent motor (well, not absolutely silent... but it's def softer and not buzzingly loud). 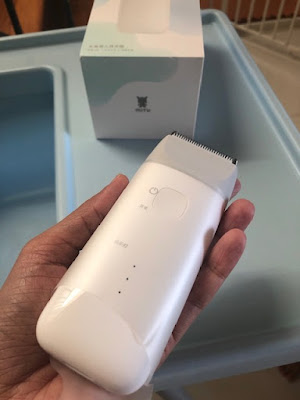 It's also waterproof so can rinse it off. Simple enough to use, small and fits comfortably in my hand. Main thing is it actually cuts well... doesn't snag the hair. 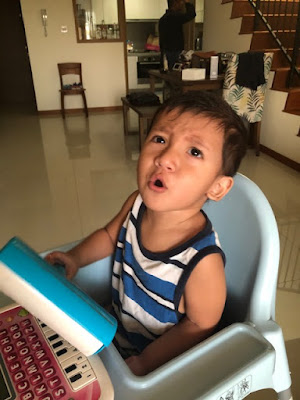 He did cry a bit, protested and he struggled so it was hard for me to cut his hair nicely. Would be better if I had help... like one person hold his hands away and try to hold his head steady for me. It's a two man job haha, so the next time I use it, my husband will have to be home to help.
I still managed to give him a decent enough haircut on my own. Strapped him in his high chair.But he did lean away from the clippers and use his hands to keep swatting it away so I had to be quick.
I need to get him a cape so the hair won't fall on him so much, it's hard to wash tiny hair off his body. I would recommend this hair clipper to anyone who has a baby/toddler that doesn't like going to the salon. It's definitely less stressful to use this. :D

Wanna hear something sad?  I can no longer put MJ in his cot at bedtime and leave him to fall asleep (usually sleeps within 5-10mins). He will cry until vomit now and still won't sleep. GAHHHHH!  Thankful that sleep training gave us about 8 months of good sleep... but bummed that he's now back to his old self where I have to pat him to sleep for hours. HOURS. WTF. The evening is the only time I have to myself to unwind, and now it's spent putting him to bed. Also means I don't get to just chill with my husband, watch TV. And I have even less time to blog now. I don't get the time to teach Myla her writing and spelling and stuff (usually I would do this after I put MJ in his cot and then have 30 mins to teach Myla before she goes to bed... can't really do this in day time because MJ is disruptive, will pull the books and grab stuff etc). And I'm behind on my drafts because, by the time he's asleep, I barely have energy to eat my dinner and it's late. Not sure how long more I can endure this. Any advice? H-E-L-P!

Maybe it's cos we leave him at the in-laws place one night a week for the past couple of months and the routine he used to have is disrupted, they lie with him and co-sleep. Or maybe it's just a sleep regression he would go through regardless. I dunno. I also don't know how to fix it, unless I sleep train him all over again and then no more sleep overs elsewhere (but oh man, it's nice to have one baby free night a week to catch up on sleep or go out with my husband). And sleep training is a dreadful task. *sad* I'm putting off sleep training with hope that he will suddenly go back to sleeping well again... but so far it's getting worse each week. Will see how it goes. So tired :( And also worried cos bad sleep is not good for his development.

On a happier note, here are some recent pics ... hope to blog and share more stuff with you again soon...