From the Laptop of New Mother of Two 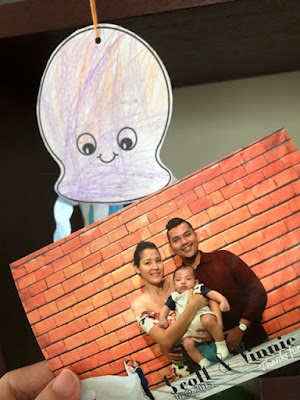 Last night we took MJ to Adamson's friend's wedding dinner. We left Myla at my mum's house but I decided to take MJ along because I know how tough it can be trying to put both a baby and a toddler to sleep at the same time, so I didn't want to unload them both to my mum.

My butt only sat on my seat at the dinner table for like 10 minutes out of the whole 3plus hour dinner (not exaggerating). Just could not get MJ to settle down, it was too strobe lighty and noisy for him... so I had to pace up and down outside of the ballroom. I don't mind doing this even though Adamson volunteered to take over the tula pacing duties (lol). I actually don't mind the exercise I get from all this pacing because it helps shed pregnancy weight.

... but why is he so difficultttttttt, when Myla was an infant, she would just sleep in the Tula where ever and bomb blast also won't wake her. But MJ is not the same  :(

I don't know how people with 3 or more kids do it. But with 2 it's already quite a struggle. Time is so tight. SOOOO TIGHT. House chores, cooking, "playing", diapers, feeds, doctors appointments, there's just never ending things to see to. And this is like a "maternity leave" sort of load.

My "maternity leave" is about to end as I have to add my writing work load on to my daily tasks. While pregnant I doubled down and had already planned and pitched my articles for this year and completed my drafts in advance, so I can concentrate on my newborn once he arrived.

My writing work load has already reduced to the bear minimum, I'm no where near as prolific a writer (I not tooting own horn ah, I mean prolific in quantity, not saying I'm a damn great writer lol) as when I didn't have any kids.

With this new set up, I miss my husband. I miss our time together. To be able to have dinner together and enjoy his company and conversation. Now it's either I don't get to sit at all for the meal (because I have to carry MJ, otherwise he cries) or if he is indeed (by some unknown miracle) napping peacefully... I still rush through the meal because he's going to wake at any second. Adamson usually handles Myla during meal time. She's the more delightful (cos she loves food haha) albeit messier of the two kids to handle during meal time. But that also means that his attention is on her.

I'm still breastfeeding. And I kind of want to give it up. You see, it's not as simple as breast is best. MJ has a milk protein intolerance (like Myla did. It's genetic. I had hoped he wouldn't get this flaw because genetically he's 50% different from Myla but nope... I guess that faulty gene came from me). So he gets very bad tummy pains from drinking milk (breast milk, soy milk, baby formula milk etc). I believe this is also why he's so damn cranky all the time. With Myla, when she was diagnosed, she was put on a special medical formula and the PD then advised me to just go full on formula and not breast feed. It worked like a charm.

This time round, Adamson and I decided MJ will take that same medical formula but I will also breastfeed him but watch my diet. But it's HARD. Even trace amounts of milk which I consume causes him pain. I don't just have to avoid milk... but stuff like ice cream, bread, chocolate, sauces etc etc... basically anything that has even minute amounts of milk in it.

The last flare up was the piece of cake I ate for my birthday a few days ago. We are still paying for it dearly. I'm torn between just stopping breast feeding and putting him 100% on the gross smelling and tasting medical formula. Or better controlling my diet so he gets some benefit from breastmilk. We will give this another month, but if the flare ups get too frequent, we will stop breastfeeding.

My lack of sleep sometimes causes a lack of patience towards myla and also husband. Although I think given the circumstances, I manage the lack of sleep very well already. And then it's not like I get to nap while he naps during the day... I still have chores to do and Myla to take care of (Myla dropped her naps entirely when she turned 2. But the good thing about her is that she still sleeps a solid 12 hours at night since around 8 weeks old).

Then there's mum guilt where I feel so bad that Myla is getting very little of my attention. The good thing is, she's very capable of playing independently, and she doesn't demand my attention nor vie for it. Whenever I'm teaching her something, or playing with her in her room... and the baby cries or even makes a squeak... she will suddenly and urgently stop what we're doing together and urge me to hurry and attend to the baby. "Mummy! Baby cry!Give baby milk!!!" She's very concerned about her little brother. I love that about her, but I can't help feeling guilty.

P/S - Stay at home mums out there who have more than 1 toddler/baby and don't have a maid or infantcare/childcare ... share with me tips on making life easier?

P/s again... errr I was supposed to work on the topics for next years articles but instead, I wrote this rant and now time's up and I need to feed MJ again  ;/

Anonymous said…
Hi holly I had a girl, then twelve months later my twins were born, so I feel you.

It's a tough gig. I had no help, but it's like what people say...you do get through it. You end up doing what you have to do, because you just have to. and one day, you'll realise that they've grown up. And the challenges will be renewed constantly as they age anyway.

Sometimes I think it's not so much about 'getting through this age', as much as it is learning how to change our outlook on things. Parenting will ALWAYS be hard, AT ANY AGE, but what we can change is the amount of patience we learn, the fortitude to deal with long days etc.

I guess that's my biggest tip. Oh and the second and third tip? Meal plan, and spot clean (don't bother thinking you can attempt chores at one go when you have time, just do what you can when you can)
3:24 pm

Unknown said…
Sahm with no help too, perhaps you can consider to send elder kid to full day school and leave chores till your hubby comes home. Its better for everyone when mummy is well rested if not you will feel depressed soon.
7:39 pm