on September 02, 2017
﻿
TRAVEL.
Expose your child to a world of experiences. A new adventure awaits at every destination.

But first... you have to get there. And flights (especially long haul) are always daunting to every new parent (I think, even for the most seasoned ones).﻿

Fortunately, with some planning and preparation all of Myla Rae's flights have gone very smoothly for us, even the ones with delays where we were stuck in the plane for a couple hours before taking off (stress ah!). Here are my tips on flying with a baby/toddler.

1. Start Small, Start Short
Start them while they are still young. In fact, having flown with Myla since she was newborn, I've found that she was much easier to fly with when she was a newborn and infant compared to when she's now a toddler. She slept for 12 hours on a 14hour flight to London! I only woke her to give her milk, and I only changed her diaper once because she was sound asleep and I didn't want to wake her unnecessarily.

But we didn't start with long haul. As new and inexperienced parents, we worked our way up to it haha. Her very first flight was a super short one (less than 45mins?) to Kuala Lumpur. I figured, even if she cried through the whole flight, passengers are less likely to get annoyed because it's such a short flight anyway. (Compared to if she cried on a long haul flight when the cabin is dimmed and people are trying to sleep... OMG imagine the stress on me!). That first KL flight, I made her sleep while waiting at the gates and then we boarded, took off, and landed... got our luggage, left the airport and she was still asleep throughout! That's the magic of having a young baby I guess, they're asleep most of the time.

Second flight a few weeks after was to Phuket. And then I felt ready and confident to take her long haul to the UK the following month. So travel, travel a lot. As you gain experience, you gain confidence in handling your baby on flights.

We did a night flight for our long haul because I knew there was a very good chance that she would sleep through it... because she has been sleeping 12hours straight through the night since she was 7 or 8 weeks old. If it's a short flight like let's say less than 5 hours, I would not choose a night flight because that would mean interrupted sleep for Myla, and that would make her cranky and tired. So do factor in your baby's sleeping pattern when deciding on flight timing.

Bring items for sleeping comfort that baby is familiar with. I always bring Myla's (unwashed) blanket from her cot when ever we travel. The familiar smell and texture of it helps her sleep more soundly, I feel. Also the baby basinets are always near the toilets and when cabin lights are dimmed, the lights from toilet when the door keeps opening and closing all the time will keep shining on baby's face (!). I use the blanket to make like a shield in front of her face so she has this pocket of cozy-ness while she sleeps, it works!

By the way, planes naturally have white noise which helps babies sleep too.

3. Tips for Take Off
They say to let them suck on a pacifier during take off. It eases the pressure in their ears. It's supposedly what makes babies cry (because the ear gets painful) in planes. However, Myla has never used a pacifier before. So we didn't have that option. That's why for her first few flights, I made her get into a deep sleep in the Tula carrier before we boarded the plane. And then I threaded the infant seatbelt around her waist while she was still in the carrier, still asleep. A bit tricky but doable.
But then as she got older, it was no longer so easy to get her to sleep before boarding and so I just let her roam and tire herself out while waiting to board the plane. Then I have to keep her entertained (while strapped to me with the infant seat belt) during take off. Which brings us to my next tip on in flight entertainment. By the way, the air pressure during take off and landing has never seem to affect Myla... no sucking etc needed. So maybe air pressure is not such a big deal afterall and the pacifier just calms babies who are used to having it.

4. Bring your own In Flight Entertainment
﻿

﻿
After the infant phase, entertaining your older baby/toddler is VERY VERY IMPORTANT. Bring more than you think you will need. Remember they will be confined to your lap when they are under 2 years old. And after 2, you will have to pay for a seat for them... but still, space is quite restricted. Bring toys which will keep them entertained in small spaces. Don't bring stuff where the parts can fly all over unless you want crawl under other people's seats picking things up. Also, be considerate and don't bring noisy loud musical type toys.

What I love bringing are- 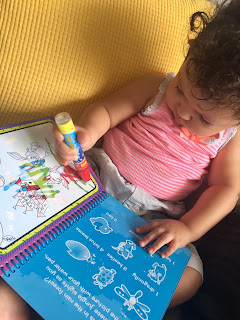 Water colouring book. This is a book where coloured images appear when it comes into contact with plain water. The "Pen" it comes with has no ink, just water, which you can re fill. This means no mess, and no accidental colouring of her own face or the tray table with markers.

Jumbo building blocks. Like Lego only much larger, for babies and young toddlers. I only limit it to about 8 larger pieces, and store it in a small bag. She loves building and stacking, this keeps her entertained the longest. And limiting the number of blocks helps keep the mess at bay.

Large picture flash cards. Maybe a stack of 5 cardboard cards. Hers has textures on them, like the Lion's mane is furry. If you have an older toddler who can do jigsaw puzzles, that would work well too.

Busy Book. Or books in general. I try to give her new books, or books which she hasn't seen for a long while, this makes it more appealing for her and keeps her attention longer. If desperate, just grab the in flight magazines.

We haven't introduced the ipad yet, but if your child uses one, then bring headphones too, and that should keep them entertained very long (right?).

Oh and spread these things out so you have enough ammo to last the entire flight. Like try to make each item last at least 30mins before offering a new toy.


5. Pack extra
Pack extra diapers. For short flights, I take 4-5 diapers. Long haul flights I take like 10 - 12 diapers! Even though I end up using much much less than that, it's better to be safe than sorry, like maybe diarrhea or what!? You don't want to be short of diapers while flying.

Pack an extra jumbo pack of wet wipes. These are super handy. Use them to wipe sticky hands, wipe down tray tables, seat armrests, everything also I wet wipe. lol

Pack an extra change of clothes for baby and yourself. They might make a mess while eating, etc.

Pack extra snacks and milk. There's food on the plane, but it's good to have your own on standby. Eating and drinking also keeps Myla busy and happily occupied. It's like a whole activity for her. I take Tupperwares of blue berries, cereal puffs, cubes of cheeses and a yoghurt pouch...  all in my Jujube fuel cell cooler bag with one small ice pack.

For milk, I pre pack her Friso Gold milk formula into individual servings, so I can just mix it up with some water in a cup and she drinks it with a straw. So easy! I don't even bring a flask along anymore, I just ask the stewardess for some warm water, they use bottled water on board the plane, please don't use water from the airplane taps ah!

Kids learn from experiences whether big or small, good or bad. That’s why Friso provides the right nutrition for your child to be strong inside to take on challenges. So don't worry about taking baby on a trip with you. I bet they'll surprise you by being a natural little jet setter. Bon voyage!

Anonymous said…
Hi Holly, you might want to read this about not asking for warm water from the stewardess
http://www.independent.co.uk/travel/water-never-drink-plane-flights-bottled-tap-coffee-tea-attendant-crew-regulated-clean-a7774911.html
http://www.foxnews.com/travel/2017/06/20/why-ordering-coffee-or-tea-during-flight-might-be-bad-idea.html
8:36 pm

Yes I do make sure it's bottled water that they fill by girls cup with for me to make her milk.
10:23 pm

I always thought that bottled water is always provided cold or at room temperature. Warm water on SQ and ANA is by their pantry tap which is not bottled.
3:38 pm