A Shit Start to the New Year :(

on January 01, 2017
Ughhhh..﻿.. I'm feeling rough as hell. And it's not because I had some wild drunken fun night out.
I had no dinner, nevermind, I planned to go to bed early anyway because I was tired. Put Myla to bed at her usual time. Was just winding down and getting ready for my bed. David was in the living room drinking beers and watching Football on tv (Celtics Vs Rangers), shouting at the tv, the usual. Lol.
There's lively chatter coming from the balcony upstairs most of the evening, a NYE gathering I guess. And then at 11pm a bright orange flare of lights came from the balcony above ours, and I could hear a crackling sound. At first I thought Oh SHIT, are the idiots upstairs lighting FIREWORKS for New Year's Eve on the balcony?!!!! WTF they're gonna burn my house down. I changed out of my pajamas (just in case I need to grab Myla and evacuate).
Then the next moment, a waterfall of hot wax came pouring down onto my balcony. It sounded like water pouring down. Then I checked when it stopped coming down, and realized it's WAX!!!! WTF.
By this time, David, with alcohol in his system no less, started shouting from our balcony, "Oi! What the fuck you think you doing?!!!"
Then he charged upstairs, and banged on their door. Think they must have shit themselves because suddenly the lights all off, their balcony gone quiet. He was still fuming and told me to call the police, so I rang the guardhouse first ( thinking maybe they could go up and check wtf is going on and please stop dripping hot wax into my balcony! Luckily it was 11pm and Myla is asleep, otherwise she would have been seated in the balcony watching the world go past anyway, no answer from guardhouse, so I rang our neighbourhood police post (The Tanglin one, maybe that's a HQ lol, but it's the closest one I could think of in a panic).
The police took a while to arrive (I think because it's NYE, a busy time). By which time I am seriously tired, from the day, and also from trying to calm David the fuck down, and stop him from going upstairs again to confront them. David said he was going to his bed, and tell the police no need to come already, come tomorrow ah. And I'm like I can't do that... they're on the way already. So I waited up. They came just before midnight. Yep rung in the new year with them in my apartment taking photos and statement. 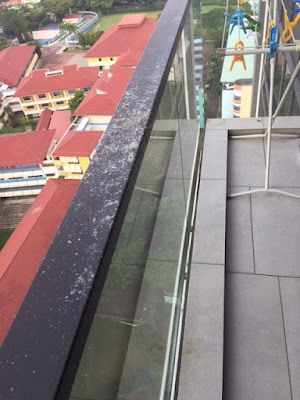 ﻿
Afterwhich they went upstairs to check what was going on. And then they called for the fire department to go check the upstairs apartment, I think because fire hazard. No one was in trouble, but the fire officers or whatever they're called, advised the neighbours on safe practices and how to avoid starting a fire. The case was logged as an accidental fire. The night is over, thank you, bye bye.
BUT, just as I thought ok, bedtime for me now... David was SNORING (he usually doesn't snore) so loudly it woke the baby. And he kept snoring even though I tried to push and prod him to be quiet. So I was kept awake until 3am trying to make Myla get back to sleep.
I get up at 5 to give her morning bottle. After which she couldn't go back to sleep (usually after her morning bottle which is dreamfed to her, she doesn't fully wake for it and she sleeps till her 8am breakfast), I guess her routine was broken and the lack of sleep that night just perpetuated itself. 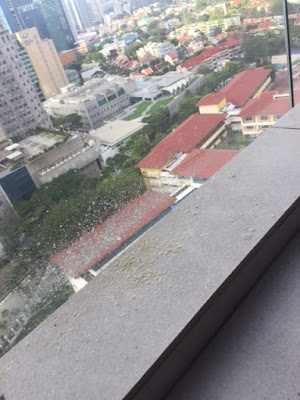 ﻿
So now, I've just finished cleaning hard wax off my balcony rail, glass and floor. I've scrapped it off with a knife, and then used a hot towel to wipe over. But the balcony floors have a slick slippery feel to them still, and I can't get rid of it. What do I do to get wax residue off the tiles?
I am beyond tired today.
What a shit start to my New Year   :(

Elisia said…
Why don't you complain to your condo management and have your neighbours pay for professional cleaners to get rid of the wax?
1:59 pm

Anonymous said…
Rub it with ice cubes to make the wax harder first and use a hard brush to get most of it off.
After that put some paper kitchen towel on it and iron the wax areas so the wax will melt and will be absorbed by the paper.
Whatever is left can be cleaned off with hot water and soap.
5:57 am

Janice said…
Get a part time helper or cleaning company to get rid of it and charge it to the inconsiderate neighbour 😑
10:09 am

Unknown said…
Hi jean, u can cover the wax with kitchen towel and use a hot iron and iron it. It works very well!!
12:53 pm

Krismathew said…
Why you so worried. Its very simple you can do itself by using one towel and iron. Other wise you call any cleaner who will solve your problem.
3:31 pm