That's your first word. You started cooing at 2 months and laughing out loud really early ( You were just under 3 months old, we have a video of you laughing really loud and heartily , it was surprising because the magnitude of the laughter did not correspond with your tiny size, I think you had only just hit 3kgs at the time. I was BORN almost a kilo heavier than that! So you have come a long long way so far, chubby one).

And then when we were in Scotland (so you would have been 6months old then), the cooing and baby sounds became hard consonant sounds. Your first was DADA. Well, more like Dadaddaddddaaaa. And from there it went to baba, papa, yaya, and finally mama (hoorayyyy! lol). But they were just sounds. Even though some people say their baby has started talking once those sounds are made... I don't think it really is. I mean, the baby makes the sounds, but it's random. They call out to everyone and everything BABAAAA! Know what I mean?

But yesterday, my Dad (your G-pa), pointed out as he was leaving our house (G-pa, G-ma & auntie Kerry had all come to visit you yesterday)- "Eh... she can say Bye"

At first I dismissed it as your usual no meaning babble. But as they went into the lift and the doors were about to shut, you did it again. You waved and went "Byeeee".


But this morning, when your dad was heading out to go buy breakfast, you waved at him and said Bye. It was so adorable. Not a loud excited Bye, but a gentle baby voiced bye. haha.

So yes, if you were ever wondering about your first word, that would be it I think. 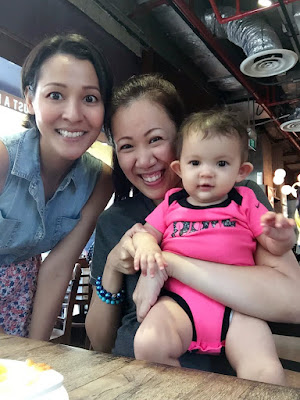 P/S - update. It's 4pm now, we just got home from meeting Bessie. Just wanted to say it's confirmed! You really do know how to say Bye and what it means. You just did it, u waved and said "bye bye" as we exited Bessie's car when she drove us home. Took her by surprise (Eh, she can talk ah???), and me too lol (even though today is day 2, but it's still surprising haha).