Would You Date a Ukrainian Girl?

on July 06, 2016
A while back, I was discussing the concept of foreign brides with my male BFF who is a bachelor (he is a local SG Chinese guy). I asked him what he thought about dating (and possibly marrying) a woman from China. It seems to be getting quite popular nowadays. When I lived in Pasir ris, one of my neighbours took a much younger bride from China. They have been together for many years now, and have one child together. And now when I live in Novena, just in my building alone I've seen 3 such couples (but with similar aged spouses).
What surprised me about his response was that he wasn't interested in dating a Chinese (PRC) woman at all, in fact it was a big turn off to him ( I supposed there are many horror stories of such a match up, like the woman only married the guy for entry into Singapore and/or for his money, and then dumped him! It's just that I do not know them first hand).
He did however say that he had a preference for Eastern European women, and would definitely be open to dating a girl from Romania or the Ukraine. So I had a peek at Ukrainian girls dating profiles online. Just out of curiosity.
So many pretty single women! There are a wide range of profiles and ages too. I've browsed for women similar aged to him, the ones that are smaller sized than him (not too hard as he's quite tall), relatively educated and don't look like a stripper.
Here are my 3 shortlisted women I've chosen for him. 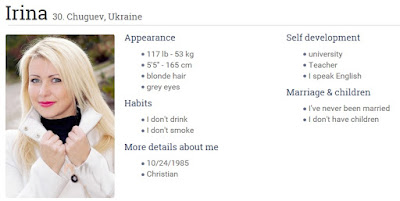 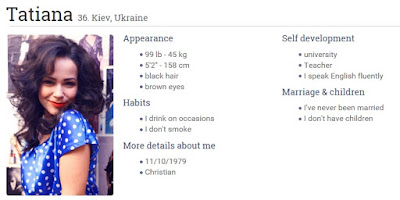 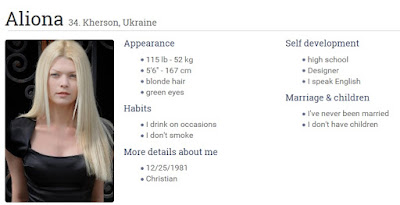 What do you think? I shall show him my choices later today. So excited!

Though I think if he made his own choices, he would be clicking on all the younger and hotter looking ones like these 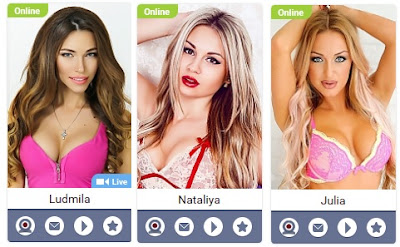 (men!!)
I for one am not opposed to finding love online. I've dated some great men in the past whom I met online, many of them are still my friends today even though we have all moved on with our lives and started families of our own.
I think that using the internet to meet someone from a foreign land is an exciting prospect!!! I'm now trying to open my friend up to this possibility... after all, he hasn't had any luck at all finding a match within his social circles here, so opening up to such possibilities can only increase his odds of finding The One. No?
Like start with emails and Facetime chats. And then some time down the line when both parties are more comfortable and would like to see if things can go even further, then arrange a meet up. Either he flies there to visit, or she comes here for a holiday. Who knows what the future holds!?
What's your opinion on meeting someone on an online dating site of another country like the Ukraine?

Mark Gallaher said…
Well, I think I can give it a chance. I mean, why not? If this girl is good, beautiful and smart, then hell yeah. Besides, I have experience in contacting girls from Ukraine on this website http://nikolaev-marriage-agency.com/most-beautiful-girls-of-nikolayev/ already. They're cute.
9:34 pm