Other Mothers Can Be Assholes

on July 20, 2016
When I was first dating an older man (Mark), I remember being nervous about meeting his friends (and their wives) for the first time. After all, these were people who were about 20 years older than I was. I felt inadequate, like they would take one look at me and say, "Who is this child?!"

But to my surprise, they were so so nice to me and did all they could to make me feel included and not out of place at all. I remember in the car on the drive back ( I think we were in Spain), I remarked happily about how surprised I was that the women were all so nice. I had been used to expecting female friends of my boyfriends to be manipulative, jealous, and catty bitches.

Then he said, ah that's because they're already mothers. Motherhood makes women nicer to other women. It's like they're not in competition anymore, and don't care for putting other women down anymore.

And I believed him. In fact, it kind of was true. Until now.

(By the way, if Ur wondering why I'm posting this online in the middle of the night, it's acutally 5pm now Bahaha cos I'm in the UK until 1st wk of aug) 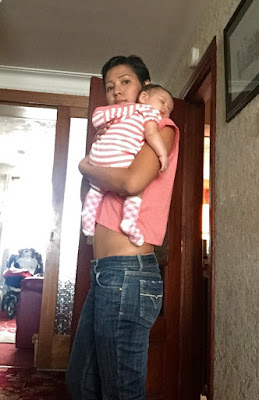 Now that I am a mother myself, I've realised that your worst critics and your worst enemies, are other new mothers! Most of them can be a real piece of work! Argh!

1. The Competitive mums
What they hell? When did I sign up to compete with you? There are mothers who are forever asking about milestones, and weight.. not out of plain curiosity but for the purpose of then gloating that their baby is more advanced or fatter than yours.

A couple months ago, I had a mum who told me that her daughter was already pulling herself into a sitting position and crawling at 5 months but my daughter is late in meeting those (gross motor) milestones because she's not breast fed! Uh hello, my baby has hypotonia, so she will be a bit later meeting those milestones because she will have to work harder for it than a typical baby would. It's not caused by her diet. Which brings me to my second point....


2. The Breastapo
These are the mothers who advocate breast feeding no matter what. They look down on mothers who give their children formula. And if looking down on them secretly is not enough (bahahaha) they put down those mothers too and make them feel bad about their choices.

There are so many reasons why mothers give their children formula... and it's rarely because they're just too lazy! In our case, no matter what I ate or how my diet was, Myla can't digest milk proteins (soy protein also cannot) and is now a Neocate baby.

Before this synthetic milk (which she started at 6 weeks old), she would howl in pain every night till morning but since Neocate, she's no longer in pain and is a happy baby who sleeps through the night, every night for 10-12 hours. So it pisses me off when the "breast is best" Nazis start preaching to me that formula not good for her.

And what's this about breast milk babies don't fall sick easily? Some of the babies I know who easily catch the sniffles and bugs are breast fed. I think it's genetic, what your immunity is like, because I was a formula baby and I'm hardly ever sick. Thankfully I seemed to have managed to pass that gene to Myla too.

3. The Materialistic mum
To her, how good a mother she is is shown in the form of an expensive thousand plus dollar stroller, equally costly baby carrier (maybe a TULA fwc), JJB diaper bag. Which is all fine, after all you are using your own money to pay for this stuff. So it's not for other people to judge how you spend it. But what is shallow and wrong is when you start equating how much other mothers spend on these things to how dedicated a mother she is.

Oh and it doesn't stop there. My friend recently attended her friend's daughter's birthday party, where other mums made that mum feel bad for not spending a lot on that first birthday bash. Bloody hell, just attend and shut up lah. It is not the occasion for showing that mum photos of your nicer and more expensive birthday cake you had for your own child's birthday. Idiots.

I never had a lot, and I certainly didn't have expensive things growing up, but I had the things that really mattered. Like a close knit family with lots of love and adventures together. I loved my childhood. I intend to give my baby the same. In fact, she's already wearing hand me downs and loving it hahahaa.

My rant shall have to end here because I need to feed my baby some delicious fomula milk. Lol.

Mothers out there, please stop being such assholes to other mums. You think you make yourself (and your baby) look good by putting other mothers (and babies) down... but you don't. You just make other mums feel sad (really, why would you find pleasure in that???). If you were really happy with yourself and your life/baby, what other people do or have or where they are in their lives, should not matter to you at all! Plus you just accumulate bad karma for yourself.

Zira said…
Are you in Aberdeen? I'm from SG and am living in Aberdeen. Been reading your blog for years! <3 Thought I seen your husband driving when I was on the road.
10:37 pm

Holly Jean said…
Omg yes! We were in dyce but now in inverurie
1:01 am