Letters to Myla Rae - I didn't love you from the start 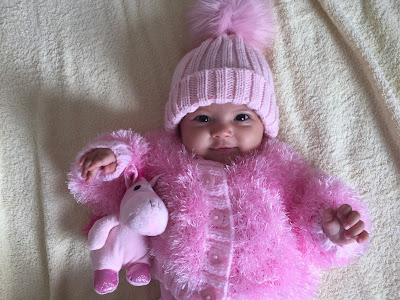 Most mothers are filled with love and excitement for their unborn child the minute that pregnancy test shows a positive. But I didn't. No, don't get me wrong... you were definitely wanted (very badly too), and you were a planned pregnancy... but circumstances surrounding your birth held me back from loving you from the start.

You see, just 3 plus months prior to your positive pregnancy test, we lost your sibling. We had to terminate that pregnancy because it was an ectopic. That baby finally left me at the end of the first trimester. In fact, most of your newborn stuff like the clothes you wore, those Tommee tippee bottles you couldn't suck from, that blue baby carrier we still use today... all those were meant for your sibling who never made it. They were purchased when I was pregnant previously.

So, as you can imagine, when we got pregnant again, I was very very very apprehensive. I didn't want to get my heart broken again. Plus it didn't help that with Placenta Previa (no reason for it, just shit luck really) the pregnancy was a scary one with haemorrhages, and with me on bedrest for the majority of it. And I knew beforehand that it would have to be a high risk birth via csection... and that you would most likely have to come early (but still, I thought you would hit 37weeks so we were planning for a first week of January baby. Didn't expect you would have to be out even earlier than that!)

I couldn't love you. I was too scared to.

But with each passing week, especially after week 24 (this is the start of being able to survive outside the womb.. albeit with lots of medical intervention), I started to believe that I would one day have you alive in my arms. Bought a baby cot. And we started fighting thinking about names for you. Boy was it hard to agree on your name! You father hates a lot of nice names! You didn't get named until the day after you were born.

Well, anyway, a week before you were born, I was admitted on hospital bed rest because I had lost my amniotic fluid. You also didn't move much anymore, so we had to rely on constant CTG readings (twice a day at least) to make sure you were alive in there. You also had not grown from the previous week's scan (before all this, you were right on track, size wise). Again, no reason for all this. Perhaps it was the placenta failing already because of the position it was in (anchored over the cervix). After a week in hospital and the situation had not improved at all ( they still could not get my amniotic fluid level back up to a safe level)... I was just living from CTG scan to CTG scan.

As soon as they were done with one CTG monitoring (this CTG thingy reads your heart rate and small movements which I could no longer feel but you were still moving actually), as soon as those discs (for detecting you) came off my belly, I would instantly worry that between that CTG (which went fine) and the next one (in a few hours) that you would die in me. I really was living from CTG to CTG, for that whole week, before the doctors finally decided you were safer out of me than in.

We made it to week 35. It was a Friday (the 18th of December 2015), at 4 in the afternoon, I was wheeled into the operating theatre, trembling. Not for the fear of surgery and possible hysterectomy if the bleed could not be controlled when they cut through the placenta... I didn't care how much I would bleed (they already had pints of blood on standby for me, I was in good hands). I was only trembling for you. I was worried that they would not get you out fast enough once the bleeding started because for as long as you were still attached to me, you would lose blood too and you're only tiny! How much blood can you afford to lose?! So I was praying, for them to yank you out fast once the incision was made and to clamp that umbilical cord fast so you're no longer attached to that death trap of a placenta in me.

The screen was blocking the surgery so I could not see, your father could not be in the theatre either because it wasn't a routine Csection. I had to rely on the Anaesthesiologist ( who was very nice and reassuring by the way) to talk me through what was happening. I heard a small pop sound (the amniotic sac being burst) and then you made a sound. It was extremely soft... like a small kitten's meow. Not a screaming wail, the kind you see on TV when other babies are born.

Then they whipped you off, you, my baby with no name and whose face I didn't know yet, to NICU and continued with my surgery. I didn't realise how long I was at surgery for but apparently, a few hours because by the time they wheeled me to recovery, it was night time! David and my parents had already been to the Nicu to see you and take photos with you. I only got to see your photo that night when David popped in to the recovery room to show me.

So, I didn't get any skin to skin, didn't get to try to breast feed you ( you were already put on a feeding tube while I was still in surgery)... which I guess would not have made a difference anyway because you could not suck yet, and you could not suck for another 5 days after too. But then once you could suck, it all fell into place (though feeding you now can still sometimes be quite an effort). Your lungs were fine though and that's one of the more important things! Thanks to the steroid shots (to mature your lungs) I received in anticipation of your arrival, you were only on Cpap (oxygen) for some hours. ( But when David visited me in the ward the next morning and told me you have the oxygen tubes on you, I had a panic attack and could not breathe. I thought Oh No, the steroid shots didn't work and there's something wrong with your lungs! But that afternoon, by the time I was allowed to go to nicu to see you, you were off the oxygen and breathing room air).

I'm not sure when I started to really love you... most of the time when you were in Nicu (you were only there a week though), the overwhelming feeling I had was one of sadness and worry. Perhaps love creeped in gradually... perhaps I had always loved you from the first positive pregnancy test but was just too scared to acknowledge it. I don't know.

I was always so fearful of losing you, and I still am. Maybe it's some kind of post traumatic stress disorder lol. So yes, I feel like I didn't love you from the start... and I'm not sure when this love started but very suddenly, I love you more than my life itself.

Anonymous said…
There is nothing on this Earth as sacred as a love between a mother and child. You just provided proof! Very nicely written. Simply beautiful.

Anonymous said…
Been a long time reader Holly. This is one of your best entry I have read.Teared a little.

Quando si desiderio su una stella said…
I recall going up and down emotionally with your posts. Will never know how it feels to go through these, but hey she's here and so heartbreakingly endearing! You didn't not love her from the start, you just had doubts clouding your mind. :)
6:16 pm