Things No One Told Me About a CPP C-Section

on December 31, 2015
I had always planned on having a C-section even before I got pregnant. It's just the way I am... I like things clinical, planned, and measured.

Then, as things turned out, in the second half of the pregnancy, I had complete placenta previa and I would have to have a Csection anyway, it wouldn't be a choice. Which was fine too. (What I didn't count on was having to have an urgent one in week 36 instead of a routine C-section between weeks 38-39)

I thought I had read enough and heard enough of my friends' experiences to know what to expect. Despite all that research, there were some things that still caught me by surprise on December 18th when Myla Rae was born.

1. IV needle to the arterial vein is no f*cking joke. If you have Placenta Previa, you're at risk of a torrential bleed before/during/after surgery. While other Csection patients get normal IV needles to their veins, PP patients get a whopper horse of a needle to the large arterial vein so they can transfuse blood more efficiently during a hemorrhage (and the regular IV needle in the other hand for the usual drugs). That pain was worse than the Csection (painless actually) and the epidural needle (also painless), and the Steroid shots to the thigh (to help preemie baby lungs to mature.... also pretty painless shots.. just a hot burn for a few seconds).

Seriously, even the anesthetic doctor keep apologizing to me as she inserted the needle, sorry but it had to be done.  I had a local anesthetic jab to that wrist before she inserted the IV, but it still hurt a lot. The other anesthetic doctor (more junior) was at my other arm (with the not painful IV needle) and he said , " look at me and just don't turn to your other side ok". I could feel a warm wet-ish sensation on that other hand. And then after that, lots of wiping of my hand. Think I was gushing blood as they poke that arterial vein. this has to be the worst part for me, everything else was a walk in the park really.

2. You won't feel anything once epidural (or was it a spinal? I don't know actually, both like the same) kicks in. I thought they were still swiping my belly with disinfectant or something... I just felt like gentle swipes across the belly with like a wet wipe. And I asked- has it started yet??? And the anesthesiologist (the more senior one who stuck me with the horse needle) said- yes, they've already cut in you, now they're just clearing a passage for you baby before they burst the water bag."

I got excited, "Wow! I really can't feel a thing!!" (What tugging all you people talking about?!)

Then few seconds after that she continued, " Did you hear that? That's your water bag bursting". (I actually did not hear anything though)

In fact, there was no tugging at all. For me it was like someone tried to break my ribcage. The guy doctor (don't know who he is, some assistant I guess. My surgeon was female), started to push down very hard on my rib cage, like giving CPR or what. I'm thinking WTF? Why is he bashing my ribcage!?

The senior anesthesiologist must have read my mind lol, cos she leaned towards me and said, " Since you can't move from your chest down, they have to do the pushing for you."

Ohh... I thought they were going to tug the baby out. Not sure if my csection is a little different because of bad the placement of the placenta. Or if they punch down on every ones' rib cage. But no one warned me about it. Thought they would just push from as high as the belly at most.

Anyway, when baby came out I heard a cry, but so soft. It worried me, why so soft siah. Then I heard the nurse/PD or whoever say Apgar 9-9. Which is great. But then I was told they had to take her to Special care nursery to be monitored cos she's a preemie and she's under 2.25kg (it's their sort of cut off, no matter whether a full term baby or preemie). So I can't get skin to skin time with her right there in the theatre   :(

4. You shiver like mad
Towards the end of the surgery, after baby was taken away to special care, and I was just lying there while they tackled getting the placenta out without causing too much blood loss (the team did so so so well, I didn't need a transfusion after all, and of course, no need hysterectomy).... I started shivering. Shivering like mad, oh god make this shivering stoppppppp!!!!

In recovery, the nurse tending to me mentioned that the shivering is actually a side effect of the spinal/epidural wearing off and that I was not actually cold perse.

5. Not being able to move your legs for about an hour after surgery feels like torture. Maybe if your csection took a shorter time (the usual is about an hour), you would still be paralysed for a few my hours after. My surgery took 3 hours, bulk of it was getting the IV in, and then tackling the placenta after. They had to put special stitches in to seal up some major blood vessels in the uterus, because the bottom of the uterus (where my placenta was) does not contract like the top of the uterus does (where the placenta should be). The delivery of the baby was just the standard 10 mins or so.

Well anyway, not being able to move my legs for just that one hour after surgery was a terrible feeling. And I kept trying to move them too. Felt so helpless lying there. Plus worried about my baby.

The recovery:
1. It's actually not as bad as people said it would be. Not at all. I was up and about, and eating greedily by the next morning (but movement restricted because I had a catheter in me and pee bag hanging off my bed). But once they removed the catheter (24hrs after surgery)and I was free to walk about as I pleased, it was so much better.

2. I had chest pains the next day. The next day after surgery, some time in the late afternoon
. My chest (rib area) hurt like a mofo... like chest wrenching spasms which made it hurt to breathe). I even pressed the call button on my bed to get the nurse to come (I never like bothering them! But I really felt like it was an emergency) I thought maybe it had to do with them bashing my ribs during surgery... are my ribs cracked?!! Or maybe it's because I kept straining myself by getting out of bed and walking around, and I've over did it. Or probably because that morning, David came to tell me that our baby was on oxygen cos not breathing properly... it made me have a panic attack where I was so scared I could not breathe and started heaving... until he calmed me down (imagine, I didn't even get the chance to see my baby yet, since the delivery I only got to see a photo of her which David snapped in the Special care nursery... and then I learn that she needs oxygen?!). Turns out she just needed it for a few hours, then she was ok breathing on her own again, it's very common with preemies in the first day or two.

But as it turns out... it was due to gas. No kidding. When they cut you open, they actually take your parts out (like intestines) to make way for baby to come out... then they put it all back in ... along with some extra air as a parting gift. No wonder the nurses kept asking me multiple times that morning if I had passed any gas yet. I didn't and did not even feel the urge to, and wondered why they kept asking me about flatulence! Anyway, I did end up passing gas later that day, and lots of it at one shot. The rib pain never returned.

Advice from the wise. - if you're going for a csection, please don't eat greedily the very next morning. Your insides are in a mess and a bit out of place after surgery. And try to pass as much gas as you can. 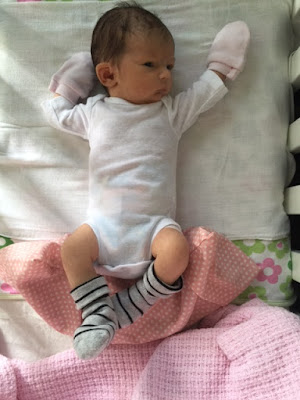 Here's a pic of Myla Rae, tomorrow she will be 2 weeks old. Time is flying by. In 11 days, it will be her actual due date.

Elisia said…
My girl was delivered full term but weighed only 2.135kg. Plus I had GD and had to have insulin while being induced so i couldn't have skin to skin with her too. I could only hold her for a while before they whisked her off to the high dependency nursery to monitor her blood sugar. Anyway, it looks like Myla Rae is growing well so don't worry too much! Take care of yourself too!
5:08 pm

Yours truly said…
This comment has been removed by the author.
4:01 am