on September 10, 2015
﻿
In the grand scheme of things.. skin tags are obviously not a pressing issue for me. But since I'm on modified bed rest and stuck at home most of the time, I thought I'd try a few things to get rid of his annoying skin tag that formed on my eyelid around the second trimester of pregnancy.

This is ANOTHER one of those things people don't tell you about pregnancy. That the increase in hormones can create hyper active growth of the superficial (outermost) layer of cells.
Started out looking like eh maybe I'm getting a pimple on my eyelid... and then ended up looking like a mole! I googled and found out it was a skin tag. Because it's on my face, it was super ugly and distracting. I wish I had taken before pictures of it... it looked just like a small protruding mole, but it was skin colour, and totally painless. I was worried it would get even larger, because I have one whole third trimester to go!!!

I know that usually people with skin tags just snip it off with a sharp scissor at home (like a tiny eyebrow scissor.. and sterilized with hot water or alcohol hopefully!). But this skin tag was on the top of my eyelid (right at the crease where you apply eyeshadow... that area so I didn't dare snip it off, in case or scarring, and in case I bleed like a mofo (which I tend to, since getting pregnant because of the higher blood volume I have now... nosebleeds, etc). Then it got rather large within a couple of weeks. I didn't think I could wait till after I give birth to have it snipped off at the doctors (that's the usual protocol. They won't remove it while you're pregnant).

Anyways, I tried dabbing Tea Tree Oil (recommended cure online), and no progress. I think because it's on my eyelid, and tea tree oil is rather runny. I could only dab on a bit at a time, using a cotton bud. I can't soak the whole area with it.... it will run into my eye! It might work if your skin tag is not on your eye area. Anyway, I read that this method takes at least 2 weeks for results. So tedious.

Then I tried using pimple cream, I had an old tube of OXY which burns the fuck out of pimples. And I never use it because it stings my skin. I dabbed a bit on my skin tag. And it did start drying it out! However, I decided to stop using it after day 3, because it made the skin around my eyelid sore and dry. Everytime I blink, I'm spreading the cream around my eyelid area. So it would work best if the skin tag were somewhere else. I reckon it would take about a week max to dry off the whole skin tag using this method. Oh btw, OXY has ingredients not safe for pregnancy ah... so use at your own discretion. I think a tiny dab wont hurt.

Finally, I thought of using a pimple patch. What gave me this idea is that one of the solutions online for getting rid of skin tags is DUCT TAPE. Lol yes. Apparently, you paste duct tape over your skin tag and leave it for a few days, and it eventually dries it out, and you pull off the duct tape and skin tag off too. I'm not going to duct tape my eyelid. So I thought hey I'll use the pimple patch, its the same logic. But much gentler, and these patches are meant for facial skin. 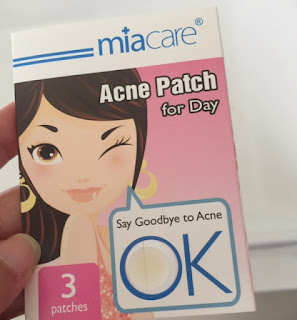 I used to use pimple patches from 3M when they first came in the market years ago, and I loved them. Very effective. But I haven't had pimple for many years... so I stopped buying. Thankfully, I managed to dig out this sample Acne Patch, this one is from MiaCare. Looks the same, and same function too.

I just pasted it over my skin tag and left it there for 24 hours. Better if you can leave it longer, but a bit hard, since I'd eventually have to wash and moisturize my face! The first day, I pasted the whole circle patch, and it was a bit large for my eyelid, to the point I couldn't open my eye properly, because it sat right over the crease. So when I opened my eye, I looked like I just had a monolid.


﻿
I didn't want to remove and start again... because I only have 3 patches in this sample. Can't waste one. So I just spent the next 24 hours with Quasimodo face. Which is fine, because I'm stuck at home anyway. I did, go to supermarket across the road for a bit. People must have though poor girl, her eye got problem. Lol. But you cannot actually see the patch, it's practically invisible once pasted on skin. After 24 hours, I took it off, and YESSSS the skin tag had dried off, about the top 50% layer had sloughed off. Day 2 and day 3 I cut the patch in half, so my eye can open normally.
Another 2 days, of using the half sized patches, and my skin tag should be gone :) . But even if not gone, it's already drastically reduced/flattened already.

﻿By the way, I read that pregnant woman can get skin tags all over, like even around the vagina. Wtf. Hope I not so suay.

daphne said…
What an awesome idea to use pimple patches, I'd never have thought they'd work. Did you read through the ingredient list to see if they contain any sort of exfoliating agents? A teeny dab of a gentle lactic acid solution should do the trick for the residual tag. Btw, you skin is pretty much flawless despite tags warts and wat not. Damn jealous lor.
2:01 am

skin tag said…
Removing skin tags does not have to be painful
The best method of removal depends on their size and location.
2:10 am