One of Those Things They Don't Warn You About Pregnancy

In my mind, I always thought those false labour contractions (also known as Braxon Hicks) only happened to women close to their due date... so much so that they rush to the hospital thinking they  are in labour. Only to be told go home you're drunk you're not in labour.

Apparently, Braxton Hicks contractions are sporadic uterine contractions that start about 6 weeks into your pregnancy, although you won't be able to feel them that early because your baby and uterus are still very small at that point. You usually start feeling them around 20 weeks into your pregnancy. And they start getting more frequent and stronger closer to your due date.

It's your uterus preparing for labour. Like a test run. But, unlike actual labour contractions Braxton Hicks doesn't hurt.

Mine didn't hurt, and it only lasted a few seconds. It woke me up in the middle of the night because my belly tensed up like mad, the muscles contracted, so hard. And even trembled. WTF. No one warned me about this! I got scared la!

I Googled and realized it was Braxton Hicks.

For some people, the muscle spasms don't get strong enough for them to get Braxton Hicks though. Lucky them. It's a bit scary. Maybe in a few weeks, after I get used to it, it won't be so scary anymore. Like Round Ligament pains.

Bloody hell, I first felt sharp stabbing pains when I was at the airport leaving for Phuket a couple weeks ago. It stopped me in my tracks. I even thought, shit man, I can't go. Don't want to risk it. Thankfully, after sitting down for a few minutes, the pains subsided, and I never had them again. But if they come again, I'll know not to panic lol.

Did you start getting Braxton Hicks in the middle of your second trimester too? 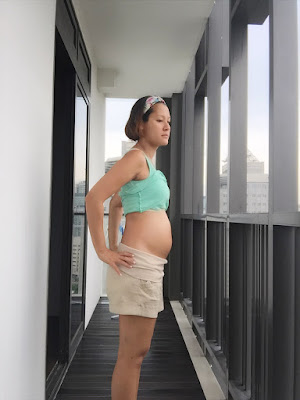 ﻿
But when I have clothes on people don't think I'm pregnant. Just fat looking! I just took another pic for you this morning with the same tank top pulled down so you can see how non pregnant I look with my clothes on. This is after I ate Roti Prata which David brought home for me for breakfast some more!

﻿
I think my baby can hear outside sounds already! Yesterday we were walking down Orchard Road, and then when at the Tangs to Lucky Plaza crossing, my baby was startled when she heard the loud whistle, the insides of my belly moved suddenly. (The annoying loud whistle the security guard at that crossing keep blowing). But now, thinking back... maybe that was the start of my Braxton Hicks, and not the baby making a sudden movement. (I can't feel a lot of movement yet, just randomly sometimes when I'm sitting down, I will feel some bubbles popping in my belly, that kind of sensation. They say if it's the first baby, the mother won't feel the movements until 20 weekish... so any day now I should feel the stronger unmistakable type movements). I don't know!

Oh ok one last thing. How the hell do pregnant people sleep at night? My bump is so small yet I have trouble breathing when I lay on my back. Previously, in my early pregnancy, I had trouble breathing like just on normal days walking about or standing, this solved itself when my bump started growing outwards recently, no more shortness of breath when I'm upright.

I was told to sleep on my left side, with a pillow between my knees... but it's so uncomfortable, feels like I'm breaking my back. And I still can't breathe, when I lie on my left side. I am more comfortable when I lay on my right side though (can breathe easily) so that's what I did last night... not sure if that triggered the Braxton Hicks which woke me up (or maybe they are not connected?).  Think I'll sleep sitting up tonight, don't want to have those muscles spasms in my belly again. It's scary   :(

Unknown said…
Some of the contraction may be too strong where some obstetrician may prescibe a medication for asthma called Ventolin to relax the muscle of the uterus. But be very careful of the drug as when you are about to reach full term, you MUST stop taking this medication as when your baby is out during labour, your uterus will not able to contract as its supposed to, leading to massive bleeding. If the bleeding is not controllable, they have no choice but to remove your entire uterus to prevent you from bleeding to death.
7:40 pm

Unknown said…
Hi Holly, congrats to you! I read up to your post on ectopic pregnancy previously and admired ur courage to post on your blog! I was wondering any methods of ttc did u manage to pregnant again? I used to have ectopic pregnancy last year, dr advised me only left 50% of chance thus till now no good news for me. Sorry just curious on any advice you can give? Thanks
2:25 pm

After ectopic, your chances of getting pregnant is slightly less (not sure if it's down to 50% though) because it can damage the tube or worst case, cut the affected tube out. Meaning will only have one functioning Fallopian tube instead of 2. So maybe that's why they told u 50%?

Did u have surgery to remove the ectopic pregnancy? With my docs advice, we had close monitoring (sometimes up to alternate day scans .. So tiring and painstaking process) with a MTX jab (it's a cancer drug which kills cells like chemo, that's why 3 months after taking jan, should not conceive, otherwise will have lots of defects). But good thing abou the MTX route is that fertility not affected. Still have both tubes and both clear. But it took a long while to resolve the ectopic (5 weeks from the jab to completely clear the embryo) and by then I was 11 wks into the preg.

Surgery is more immediate result in terms of terminating. But still even 50% is still good chance. Just that you have to time the Times you try to get pregnant.

I timed mine by monitoring ovulation (there are digital ovulation predictors from Clearblue) I used those and I also charted my basal body temp (Google how to do it). I did this even though we were not trying to conceive during the 3 month break even... So I can monitor my ovulation pattern.

During those 3 months break my husband took some vitamins (think it was called Qo10?) from my gynea prescribed cos his sperm is poor quality. This helped too for when we finally could try again, it all come together well.

Geraldine said…
Sleep on your side and try putting a small (flat-ish?) pillow or folded towel below your bump to support it. It help me loads during my pregnancy. it gets harder sleeping on ur back as the pregnancy progresses
5:27 pm

Miko said…
Hi Holly, many thanks for your kind advice! For my case unfortunately it had been ruptured ectopic pregnancy therefore I need to go for surgery immediately.

I will tell myself not to give up if really worse come to worse I will opt for Ivf but still pray hard to be a natural conceive...Nevertheless, appreciate those advices above I will take note as I have been charted my basal body temp too n lastly I enjoy reading your blog :)
11:57 pm

Holly Jean said…
Thanks! He been doing that and finally got the hang of it. My arm cramps halfway through the night though! Lol
5:10 pm