TallyWackers the Male Version of Hooters 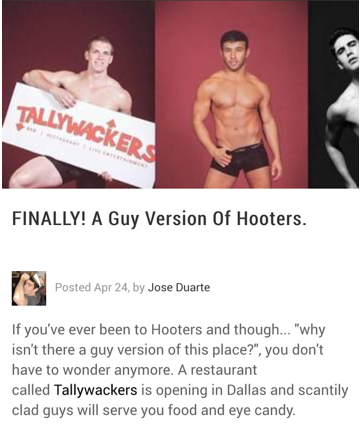 This came up on my newsfeed a few days ago. Apparently, in Texas, there's a male version of Hooters restaurant. It's called Tally Wackers and scantily clad guys serve you.

Wonder if any straight men would eat or drink there. Even if it were in Singapore, I doubt straight men would go. Not that they are the target audience, not at all. But you know how in Hooters... you will see straight women there. Doubt the reverse would be true. Because men have such fucking double standards.﻿﻿ 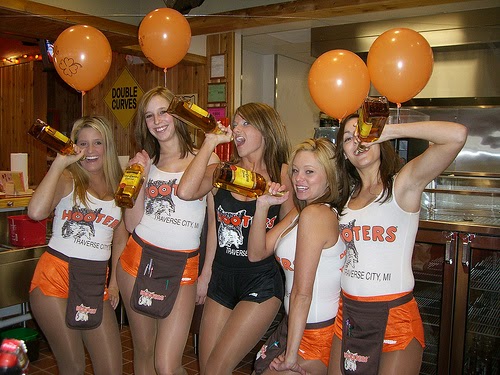 Let's say for instance, at Clarke Quay, if I'm with my husband or any male friend, and we are walking past Hooters... if it's not crowded, and we need a drink or food at that time, we would just go get a table in there. Like it's any regular restaurant. Do I find it kinda shitty having a girl in a thick push up bra, and tiny hot pants serving us? Yes, a little bit. But I wouldn't NOT GO TO HOOTERS because of that. 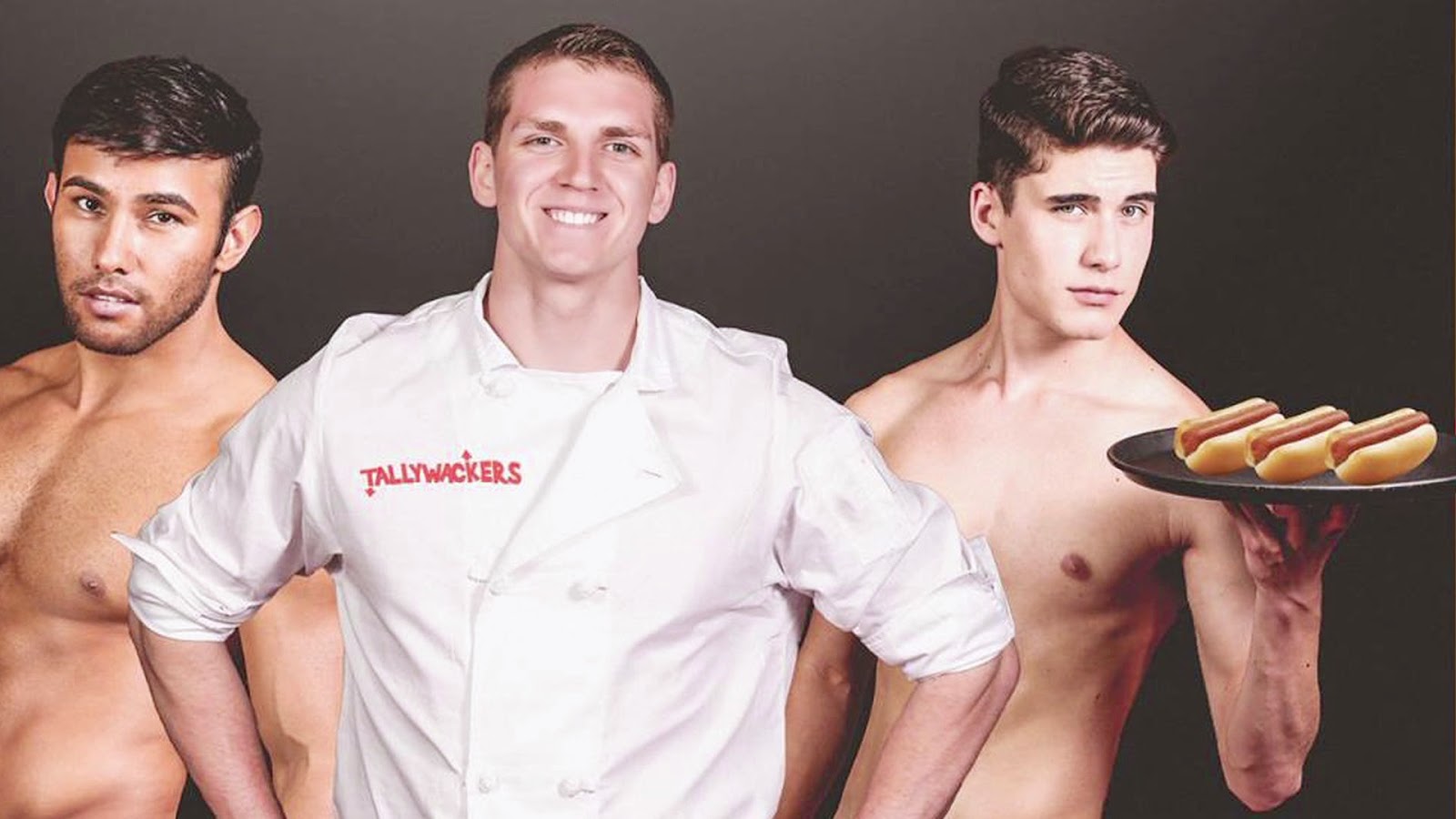 ﻿
Now if there were a Tally Wackers in Singapore, perhaps a few doors down from Hooters that very evening, and I suggest to my husband- Let's go have a quick pint of beer in there. I'm pretty sure he would rather drink sewage water for the rest of his life.

Last time ( I think the place was called Gotham Penthouse) at Clarke Quay... I took an ex BF with me to the male revue there (Chippendale type male strippers.. I think they were from South Africa or Australia..). Anyway, he thought he was just going clubbing with me... which he was... it is a club, what! Then after watching part of the act, and the girls up front going wild for the boys on stage.. and no girl paying attention to him in there. He got pissed off. Saying the place was disgusting. And the girls behaved disgustingly. He left. Hahaa...

﻿
﻿
Oh but it's ok to have the Hooters girls flirt with you for more tips, play those dimwitted games with you and completely ignore the woman guest at your table?

What do you guys think? It's a double standard isn't it? They will think women are jealous or insecure if they don't want to go with them to (or want them to go to) Hooters. Yet if the situation were reversed, they wouldn't want to take their GF/wife/etc to Tally Wackers, would they?

Anonymous said…
This is a response from a guy...

Personally, I think there is a time and place for these kinds of...indulgences. These outlets exists because there is, basically, a demand.

If one is a consumer to these services, one should at least exercise some tactfulness. I mean, if a guy wants to enjoy a night out at Hooters, by all means just go ahead. Go ahead and enjoy the night with the rest of the boys. Of course, for night out at such a place, I don't think it's appropriate for him to invite his girlfriend/wife/female friends. Because it's obvious he and his brothers will have a tendency to get a bit wild there, and this may put off the women.

And the same goes for the ladies going to Tallywackers.

Why would we want to drag along our significant others to such a place, if we know it'll only risk them getting offended.

On whether people in committed relationships should allow their partners indulge in these places, greatly depends on how open they are as couples. Definitely trust is a huge prerequisite for couples to consider letting their partners patronise these places. Trust that the partner would observe limits and not succumb to temptations like infidelity.

Or maybe couples could work out some kind of a deal before they allow each other enjoy a night at Hooters/Tallywackers with their respective friends.

As an example, both partners must put in some effort and get in shape before they could earn the privilege of going there. This is so that if temptation arises, they'd remember that they have an equally attractive partner waiting for them at home.