on March 16, 2015
Yesterday I watched a video of a Thai celebrity, Duangjai Phichitamphon, ranting about Chinese tourists at Jeju International Airport. The video shows hoards of PRC tourists crowding and pushing their way to the front of the counter.

Ugrh! So typical of them!

Having been around PRC tourists when abroad and also having lived around more of them in Singapore lately, I completely understand her frustration. Although towards the end of the video, when she starts to get more angry, it's a bit off putting because I guess it's the Thai language which tends to sound quite crass when spoken loudly.

I have 3 neighbouring units on my floor (Those 3 are rented units, the owners don't live in them, so the tenants tend to change every year or two). Right now, 2 out of those 3 are PRC occupied. The third is rented by some white guy. The PRC woman right next to me has a humongous shoe cabinet outside her apartment. And it's not exactly a shoe cabinet lah, more of a cupboard, it's as high as my shoulders. The passageway to the lift is already quite narrow, I think it's very inconsiderate of her to place that cabinet there.... in front of my doorway. The condo management did send out memos to residents last year saying no bulky items in corridors (the clutter can be a fire hazard I guess). But she just ignored it.

David doesn't seem to mind it. He bumped into the landlord of that unit one day, and the landlord mentioned something about aiyah why the tenant put such a big cabinet there... and David said it's ok, doesn't bother us. But it does bother me (ok, only when I'm passing by it to get to the lifts.. not like it's bothering me 24-7 lah), because it's blocking half the corridor, ugly and should be inside her apartment. 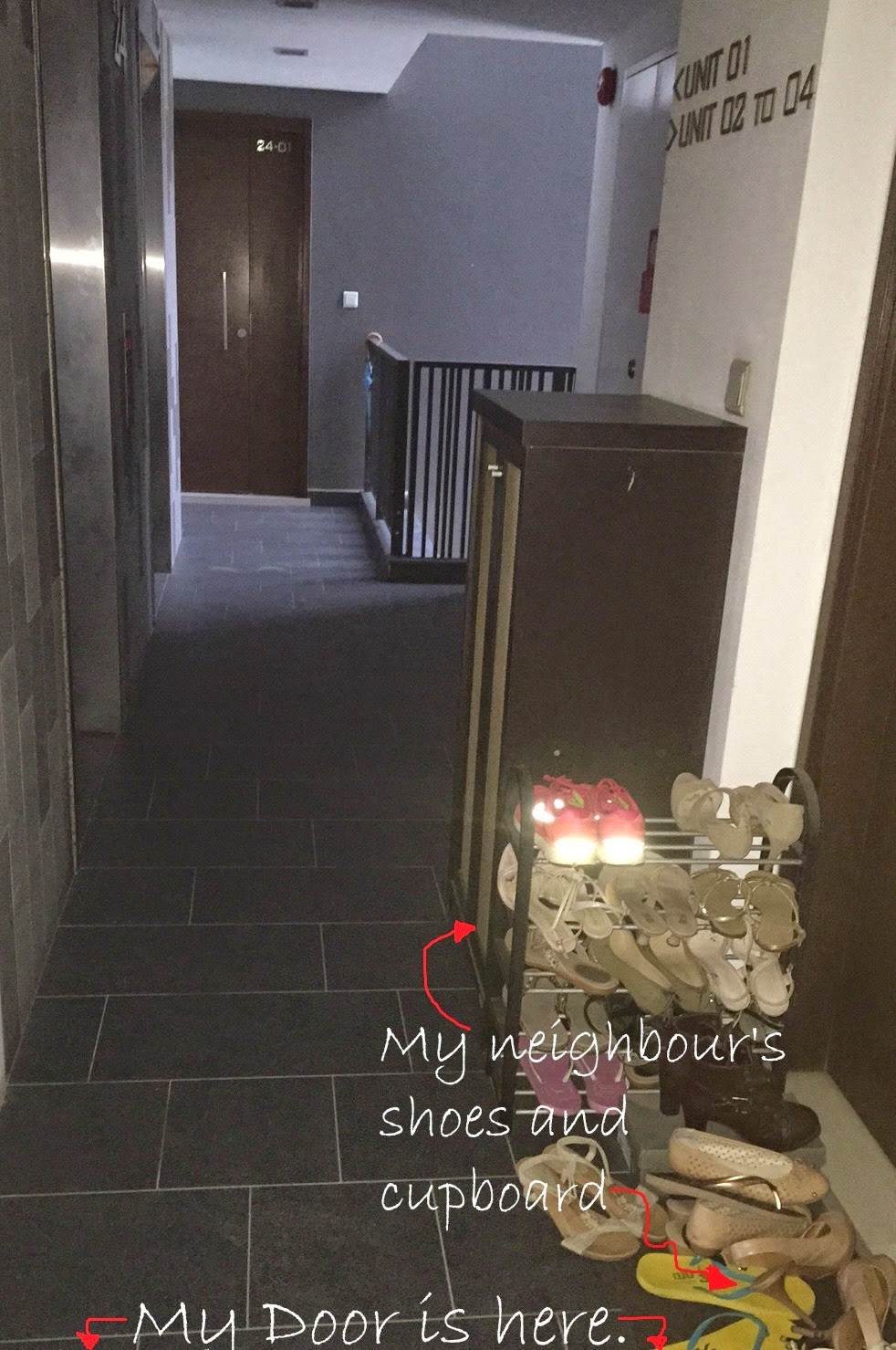 But on the whole, other than that cabinet, our China neighbours have been ok to live across from. Have you got any PRC neighbours? What are they like?
When travelling, I dread being around PRC tourists (especially in big groups), it's perhaps as bad as (or worse than) having a cranky baby sit near you in the plane. They can be loud, they don't know how to queue, don't have basic toilet etiquette and hygiene. Plus recently. I've read about them opening emergency doors on the airplanes *WTF*, chasing penguins in Antartica, manhandling a wild dolphin for some nice photos (and killed it because its lung collapsed) and having their children pee and shit in public places, like the streets, food courts and airplane aisles instead of taking them to the toilets. Ewww. 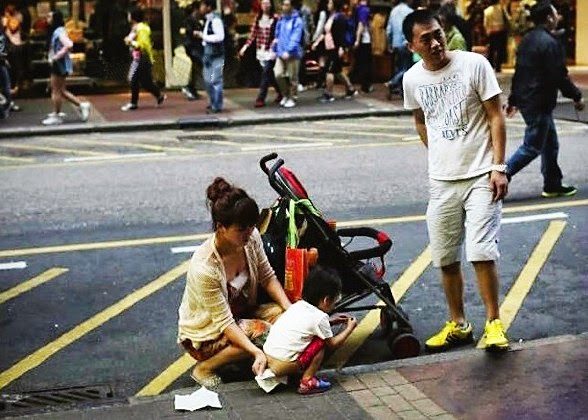 I think the shitty experiences I've had when travelling is that they have no concept of queuing. Doesn't matter if you've been queuing in an orderly manner for some time... when they arrive, they will just push past you. Then, the second time I was in Hong Kong with my brother, we had a flight early the next morning during rush hour, so I booked a taxi in advance to take us to the airport.

It was cold, but instead of waiting in the lobby, I waited outside the hotel for the taxi, because I really didn't want to miss the taxi. There was no way you could flag one down at that time. Of course, there were some PRC men (I think there for business/work) outside the hotel, trying to flag taxis.

Then I saw mine approaching. I identified it from the license plate number and it had a sign clearly displayed to say it was booked (I can't remember the sign, probably said On Call or something). Then these 2 asshole PRC men rushed towards my cab like a pair of monkeys. I heard one of them men say in Mandarin - that cab is on call. And his friend said- nevermind, just take it.

WTFFFFFFFFFFFFFFFFFFFFFF. bloody assholes. Luckily I was waiting outside for the cab (even though the concierge said I can wait in the warmth and when the cab arrives, he will let me know). I too had to rush towards the cab like a monkey so I could stop them from stealing my ride. Told them in a panicked and shouty manner that I had booked that cab. Luckily they backed away with an embarrassed look on their faces... because if not, I was prepared to kick them. lol. Normally I'm not so kiasu one, but I really needed to get to the airport on time.

So I generally have not had good experiences with PRCs. My husband thinks they are fine though. He's been to mainland China once and they were all very pleasant according to him. And when I was in Hong Kong with him, it was his first time there and I pre-warned him about the mainland Chinese tourists there... but that trip, we didn't come across that many of them. Don't know why. So was pretty pleasant throughout. I think I was only pushed once, by this Chinese woman who shoved me pretty hard in my back as she rushed to join her friends ahead of the queue. This was the queue for the tram at Victoria Peak. Wah lau, relax lah, why must push until so hard. Her water bottle dropped at my feet when she pushed past me. I was so shocked by the hard shove, I didn't do anything, just watched her pick it up and carry on. In retrospect, I should have kicked her water bottle far away so she would have to go retrieve it. Haaha.  Yeah, but she pushed me, didn't push my husband instead, so he still has the impression that China tourists are ok.

What have your experiences with PRC tourists been like?

Anonymous said…
I hate to have to say this but.. the Chinese like white people. They usually assume that they're richer and therefore superior. You're quite tan and don't look fully white, which is probably why they're mean to you and not to your husband. Of course not all Chinese people are like this, the educated ones know better than to behave like the uncivilized ones, but this is generally the case.
9:25 am

tiffi said…
Social etiquette topic has been my lifelong interest. It's ok for the non affected party to think less but if you are pushed or treated unfairly, it's hard to put it down. of course, Holly i faced what you faced before. i knew you wish to scold that PRC who pushed u and expect an apology but somehow being the nice us, we swallow down thinking "ahh..forget it" yet it still haunt us back memory, making us feel inferior. i think PRC is afraid to offend the Caucasian, they tend to be seen as superior and powerful. but just say we put Caucasian aside, how we can we demand more respect from the public? there are people who are rude unnecessarily even if we are kind, that's really is nerve wrecking to the max, so unjustified. i guess we can't mold their character, what we can do is to improve our appearance, dressing, look to influence respect. very sad but true, many people treat u according to how you look on the outside (lets' say on service line people who has to decide their service level on First glance of u and me..) and a good outlook signals power. so yes, dress up like u always do and u will get the respect we desire!
PS: i really think the PRC who push u on the tram queue is totally shallow, nothing wrong about you. let me tell you, there is once a PRC man who accidentally hit my arm on the train, not even sure if he purposely did it , all he returned is a very apologetic smile but no sorry! i was fooled thinking his smile meant sorry but i came home feeling really regret because my arm happened to be injured prior to his hit, granted he didn't know about my injury..but still shouldn't he say a Sorry?! deeply regretted. next time, i am not going to let such bastard run away!!

Anonymous said…
My neighbours rented out their HDB a few years back to a bunch of PRCs... I know it is horribly awful to judge, but the whole place smelt horrible! We couldn't even keep our front door open because of the awful stench that smelt like old sweat + rotting fish.
10:59 pm

- Zabrina H - said…
I personally do not fancy majority of PRCs too. But my perception of them did change after working under a husband-wife PRC boss. They owned a science enrichment company and I took up freelance assignments from them. They are really nice and pleasant to work with especially me being a Muslim
Donning the headgear and most of their assignments are at church schools. Guess they are the modern civilized ones.
1:05 am

Holly Jean said…
Ok that would make a lot of sense. I used to think its cos I'm a girl so they don't care... But my husband is a guy, bigger than the average chinese and his face never smile one ... So they don't dare push him. Lol. But yeah he's blind to then pushing me so.... He thinks the Chinese are ALL fine. Bah! Hope he goes on more trips and find out it's not really so. Hahahaa
3:53 am

Holly Jean said…
Yeah and I'm always the idiot who says nothing at the moment... Then minutes later when it's too late, I feel like I should have done something or shout or what.
3:54 am

Holly Jean said…
Yes. I agree. I used to teach a teenager who was prc (newly moved to Sg) and she wasn't anything like the typical Prc. I think depends on education and the area they are from and the younger generation as not as uncivilized.
3:57 am

Anonymous said…
hi Holly, my worst experience is when I was taking a red-eye flight from Shanghai to Singapore. There was a class trip (or some sort) of primary school students in that flight. Literally, 40-50 students. And you know what, as soon as the Seatbelt sign is off, they were running around and chasing each other in the cabin. This went on for almost the whole flight.
In the same flight, a passenger stored his hand-carry in the overhead compartment right above my seat. In the middle of the flight, he decided to get something from his hand-carry. Without saying nothing, he just started to open the overhead compartment. Normally, this is all right, but he was standing so close to me, bumping me a few times, and in the process, dropping a couple of items from his bag on me !
After he is done, he just picked those things that drop and walked away. No sorry, no excuse me, nothing.
10:07 am

Tinkerbell® said…
I totally feel for you. I've had some experience with PRC too. I don't think commenting right there and then will make a difference though as they don't see it as a problem or fault. I was in ShenZhen 3 years back, and to my horror I never expect ppl in the city are equally as bad as what ppl have been raving about PRC attitude. All of us was queueing for toilet in a restaurant patiently and this woman in 30s have the ball to cut the line and despite me pointing out to her where the queue is. She just walk past me, which obviously I got pissed and went further by asking if she do not know if she should queue up and did her mom teach her basic courteous manner. Despite that she still ignore all of us and went ahead
9:57 pm