Black or White this Sunday? And What Will Become of Singapore?

on March 26, 2015
I've been so touched by the outpouring of emotions and sentiments on social media over the recent passing of Lee Kuan Yew. The queue for the state funeral, despite being up to 8 hours long yesterday, was orderly. People were helping each other.

Kind businesses along the riverfront and along the path where the queue meandered, they put out tables with free cold drinks, and some put chairs out for the weary to have some respite along the way. Good Samaritans just bought a load of drinks and food and passed them out to those queuing. No one fighting, pushing, or being kiasu. Kind of like how the Japanese were during the Tsunami aftermath ( I was so impressed with the calm, compassion and order of the Japanese, no looting etc). Honestly, I didn't think we had that in us. So to see (most of) the nation unite. It has made this loss much easier to bear.
But on the flipside, social media does not discriminate so every attention seeker, idiot, sheep, shit stirrer, disgruntled and misinformed person gets a voice too. And it's usually an ugly one.

It saddened me to see profiteering, and people who are trying to capitalize on his death. 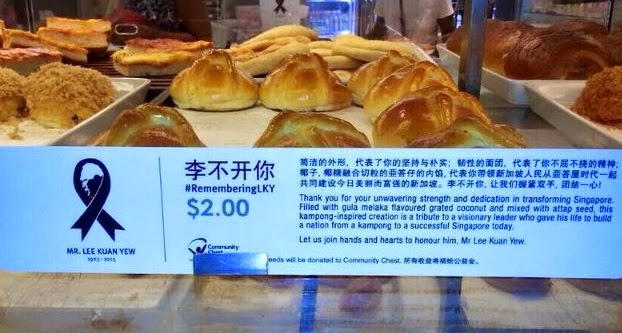 ok, with BreadTalk, they said that proceeds were for charity. Hmm... I think their intentions were good (if really for charity) but still, to churn out a Lee Kuan Yew bun the day after the man dies... is in poor taste.
Then there are those who make a show of going to his funeral. Why are a few of them smiling widely like on a fun school excursion???? The inappropriateness baffles me.

I suppose it makes sense when you rationalize that most of this group are from the flashmob generation. This is just the way they do things... whether it's a movie premier or a funeral. But still... don't smile happily la, aiyoh. 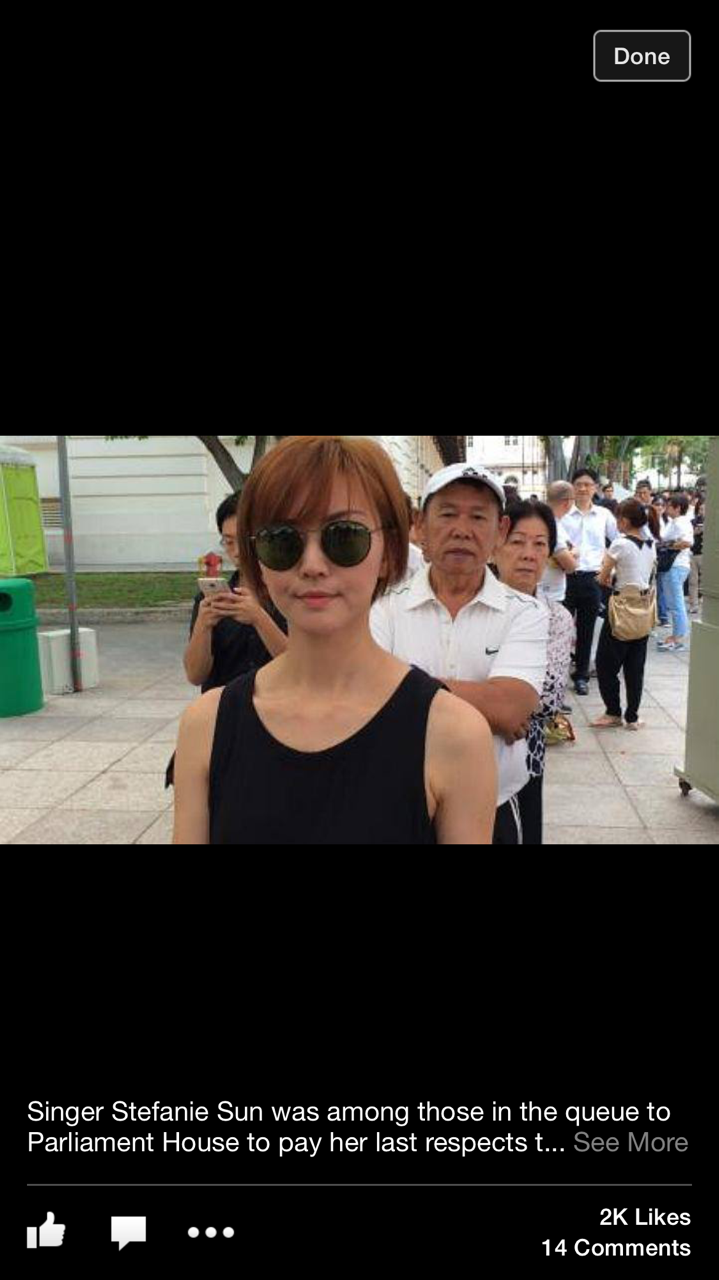 ﻿
Of course many celebrities, like Stefanie Sun went to the funeral too, but they were mostly low key. They knew that this event wasn't about THEM. 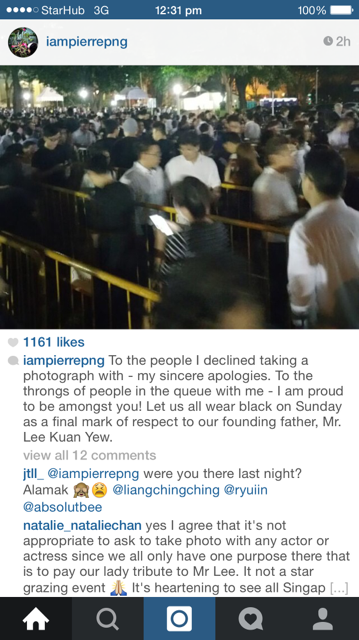 ﻿
See, even Pierre Png (*swoon*) went, queued up with everyone else so that he could pay his last respects, but declined to pose for any photos with fans.

By the way, when I went back to his Instagram to get this screenshot, I realized eh... he changed his description.. first he said lets all wear black this Sunday... then he changed it to wear WHITE (upper caps).
Someone initially came up with the initiative to Wear Black this Sunday. It went viral. 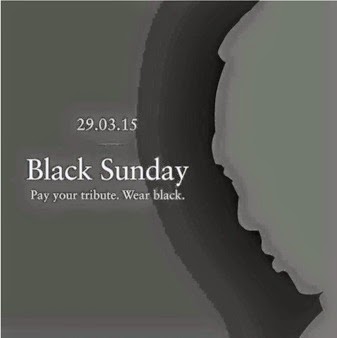 Then someone started a WHITE version. Black or white, both are colours for mourning, so its ok. It has caught on too and is going viral... which is fine, wearing white is appropriate... but so many who are spreading this 'white movement' is going round saying Not to wear black. LKY wants us to wear white. And that the Black Sunday thingy is Fake (eh? this kind of thing got fake and authentic??).
﻿
﻿﻿
﻿

Please la, wear whatever you want but don't spread it like it's some kind of mandate (because it's not). Then you even make people feel bad/guilty/wrong about wanting to wear black. (Until Pierre Png change his description some more!) 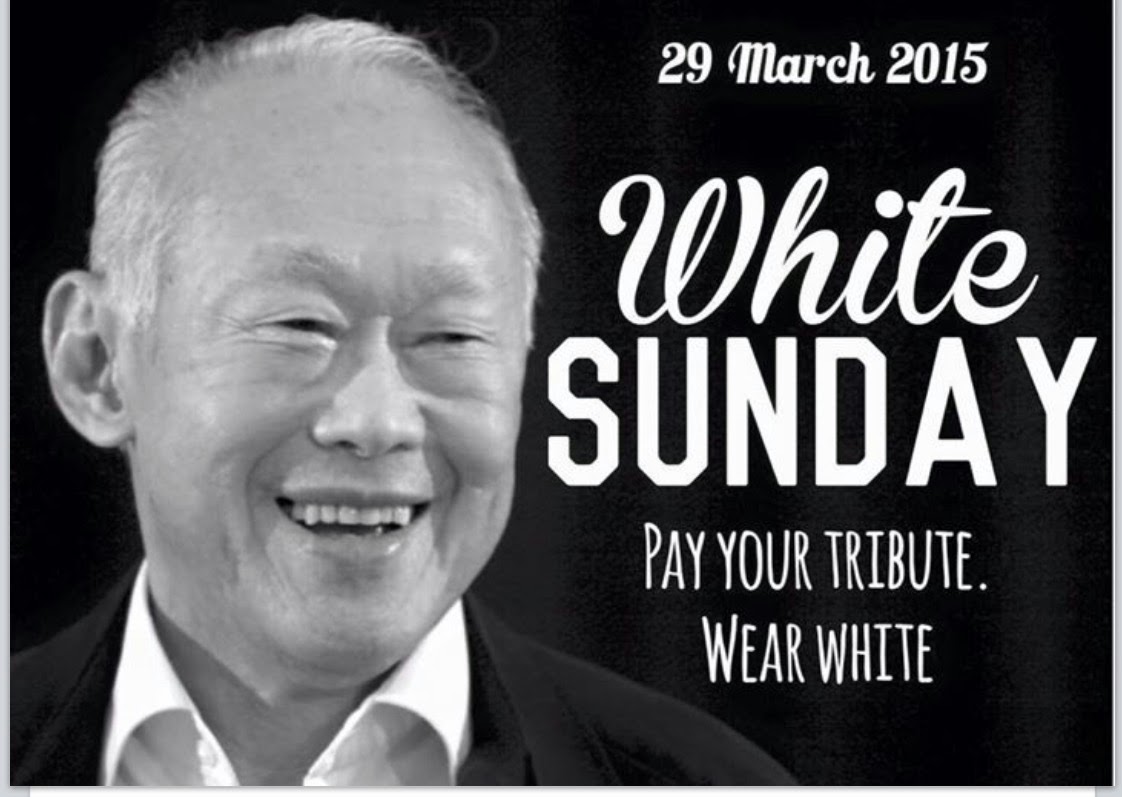 To me it seems like someone went, "damn it, that black movement thingy is going viral. Why didn't I think of it first! Nevermind, I shall start a wear white movement and challenge the black one."
HALLO! This shouldn't be about your ego and how many people you can get on your side.

I'm not against wearing white or any other colour. It's your choice. But what I hate is when smarty pants people try to convince you that wearing black is WRONG and that you are listening to a Hoax (wtf?) and that LKY would have wanted us to wear white. People's Action Party always wear white. This is LKY's funeral, not PAP event leh! And if black is wrong, why did he wear black to his own wife's funeral then??? Stop spreading nonsense. Full stop.

Our Facebook newsfeeds are filled with praises for LKY. Some even more annoying because the posts come across as self glorifying or like they're trying to outdo everyone else with a bigger tribute. All singing praises etc. I find those posts harmless, and if I've seen enough, I just skip past their posts la.

So I understand how to some, it would seem as if all these people are so stupid that they think that Lee Kuan Yew created Singapore and that all the good things are because of him and him alone. I know it might seem that way when we call him the founding father, and talk about how Singapore is what it is now because of him. But most of us actually do know that there were others before him, along side him, and after him who have also contributed greatly to this nation. But for this week, we just want to celebrate this man.
﻿
﻿
﻿I like this guy and agree with a lot of his views (on loads of stuff) whenever he posts them on FB. I can imagine how frustrated he must feel when people conveniently 'erase history' but this post is kind of mean. Sarcasm is one thing, but this came across as passive aggressive to me.  :(

Perhaps someone will post info about our other founders and pioneers in the coming weeks. That's a good way of educating the masses about our history. :)

The scariest and saddest posts I've seen though are those who relish LKY's death. 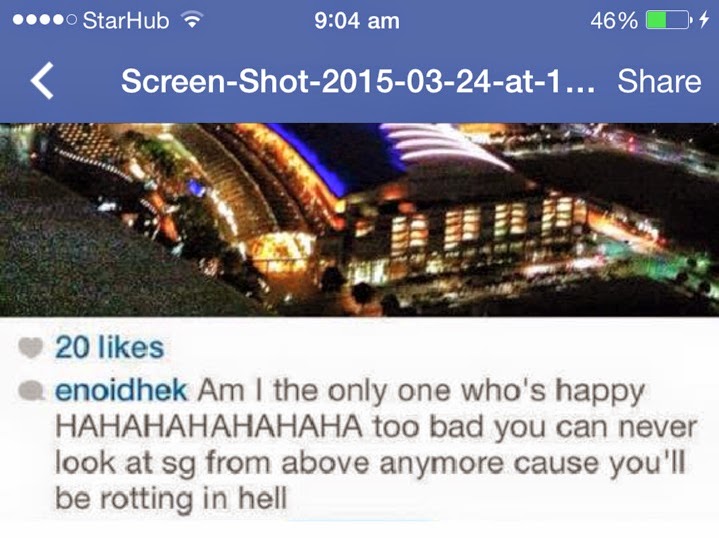 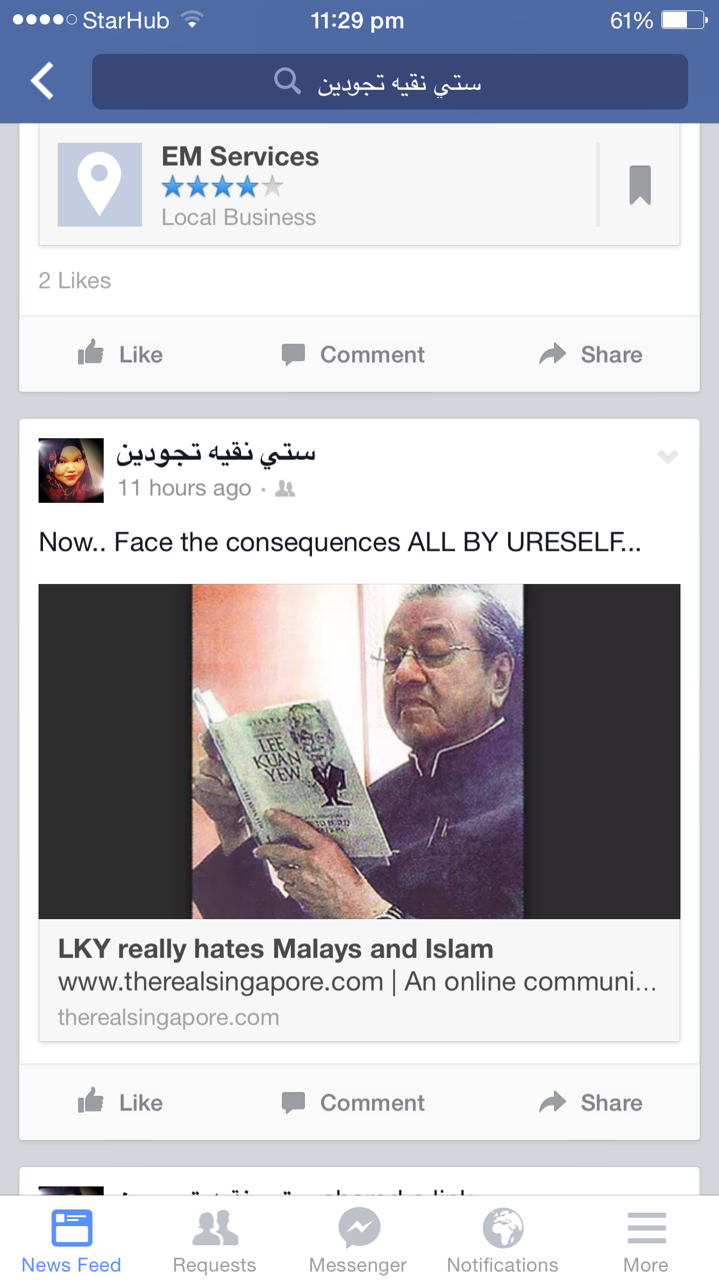 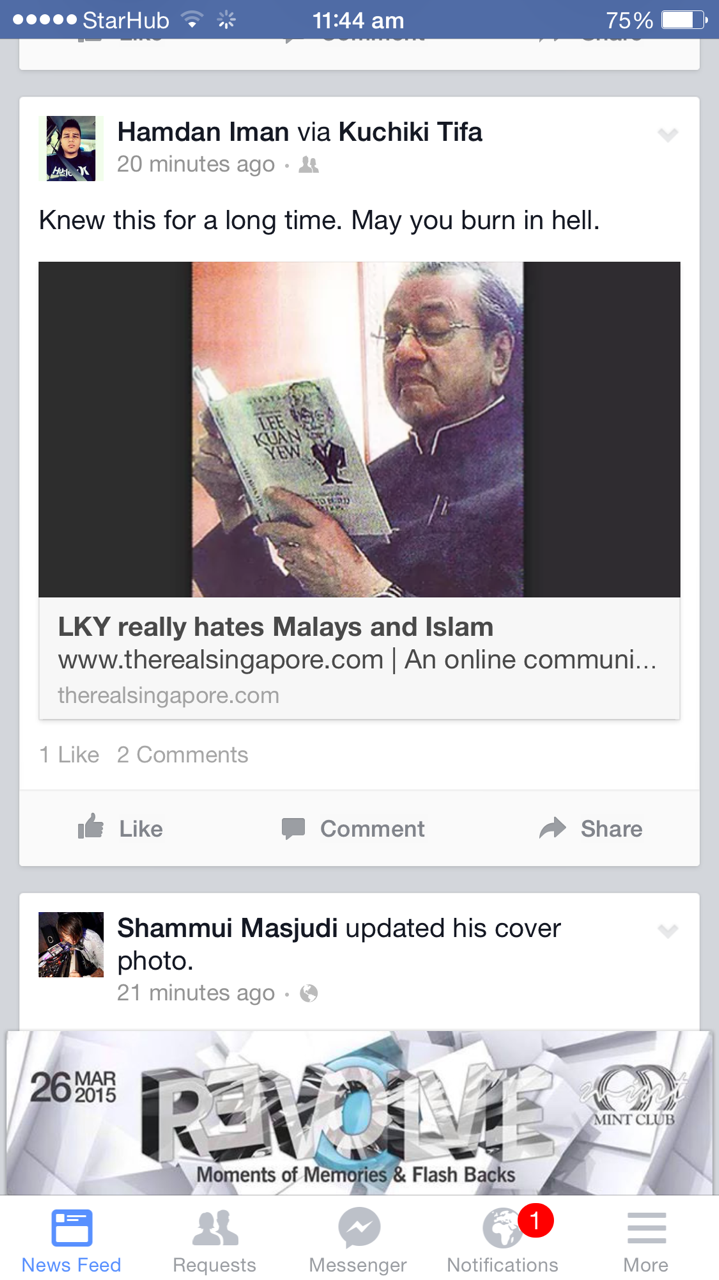 Ahhhhhh why are you getting your views/facts/info from TheRealSingapore website???!!! They claim to be a site that provides uncensored socio-political views... but haven't you realized their views are always anti-Singaporean. They are out to disrupt the harmony of our country. It's poison. Please get reliable sources before you believe in any article 100%.
I really hope all this hate and spite will blow over and not harm the racial harmony in Singapore. Let us work towards a better Singapore for all of us.

Theresa said…
Hi holly, i really enjoy reading this blogpost very much. what irks me most is not the blatant disrepect and rude comments (of course, i still find it very distasteful). But that there is this group of people who deemed themselves as "smarter, more intellectual, having a broader world view, different from the ordinary masses"... this group of ppl who keep analysing and are sneering at us ordinary sporeans for feeling the grief over mr lky's death and suggesting that this is all a herd mentality, public spectacle blah blah blah, bringing in academic theoriea and terms. somewhat like alfian sa'at lah. I do like some of his posts too but i agree that was mean. As one reader aptly comment, all this is a "pompous display of wit"... you get what i mean? Haha
7:19 pm

Theresa said…
Hi holly, i really enjoy reading this blogpost very much. what irks me most is not the blatant disrepect and rude comments (of course, i still find it very distasteful). But that there is this group of people who deemed themselves as "smarter, more intellectual, having a broader world view, different from the ordinary masses"... this group of ppl who keep analysing and are sneering at us ordinary sporeans for feeling the grief over mr lky's death and suggesting that this is all a herd mentality, public spectacle blah blah blah, bringing in academic theoriea and terms. somewhat like alfian sa'at lah. I do like some of his posts too but i agree that was mean. As one reader aptly comment, all this is a "pompous display of wit"... you get what i mean? Haha
7:20 pm

Anonymous said…
I absolutely agree with you. The real Singapore is shit! It's outright disgusting and meant to cause discord and harmony. I worry because the poison from TRS may cause riots, fights, tension and who knows war?! And for this very reason I hate what social media has done..it's created some bad influence..I worry what Singapore will be without LKY. I am not supporting or being biased here however I do think the new generation are trying so hard to emulate the west with freedom of speech , opposing ideas/ policies just because they want to be heard! As LKY says, its not about which party but who is in it for the long run and genuinely want to work for the well being of singapore. I.mourn his loss..and whilst it is great seeing Singaporean's rally together this week, I worry about the days,years ahead without this might leader of our..on another note, I feel for his son too,being in a very difficult position as PM and son of LKY and I too believe that LHL is in this for the good of Singapore, to carry on the works of his dad..regardless of what negative perceptions others may have...
11:25 pm

Kyet said…
I agree that the wear white or black debate is silly. Consider wearing pink too, since he wore that colour many times.
7:06 pm

Holly Jean said…
Yah I wore pink today! And I was around Cityhall area and was worried ppl think why I wear pink! But pink's his fav colour
11:50 pm

Holly Jean said…
:( I think lee hsien loong is a good leader too but he's in a different era from his dad's time. I think our generation is made up of much more idiots who demand more and demand the kind of freedom they cannot handle
11:54 pm