I Missed my Flight. Fuck You Universe.

on October 03, 2014
Just need a quick rant cos I hate wasting my hard earned money. Arghhh. I had to skip my flight (last minute) today and I cannot get a refund. ﻿ 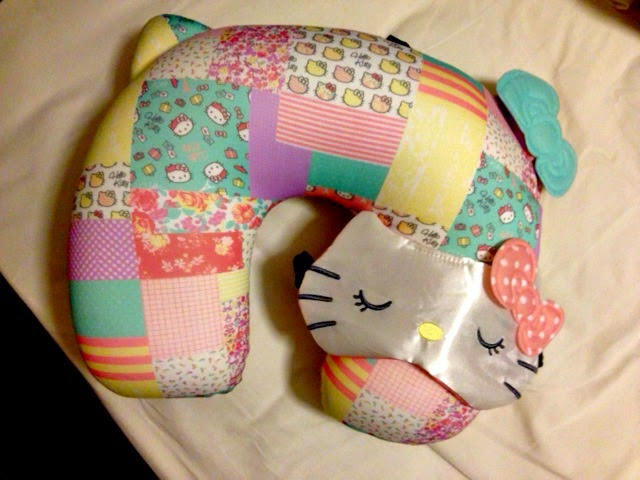 On a happier note, lookie at my travel accessories. I got the Hello Kitty pillow at the airport on my last trip to Scotland (cos we left our place in such a fluster.. had to drop Lola off and all... that I left my old one at home. That was a ugly black Samsonite one anyway).  Then my brother's fiancé gave me this Hello Kitty eye mask last week. So now it's all matchy.  I will need an overnight bag to match. And maybe some fluffy pink air plane socks.

Just because I'm in a chatty rattling off kind of mood... I shall share with what happened on my last flight to Bangkok.

I sat down and just ignored him (as most Singaporeans do). But then even before the plane could take off, he turned to me and started chatting. Urghh!

He's from Melbourne, I forgot his name. He asked if I were from Malaysia.   -_-
He told me he was in the film industry and he owns a production company .. he makes films and he just went to Cannes etc (yeah.. ok buddy). Then he asked what I do, and I said I was a writer/blogger. And he said he writes too.

He then tells me he can live anywhere in the world, and travels a lot. He was really talking a big game (but I was getting increasingly unimpressed). Here he was in Scoot, at the tail end of the plane. His clothes were crap, nothing about it says he used to be in the fashion industry  (HIGH FASHION some more leh ) or anywhere remotely near fashion. He was wearing a stretched out t-shirt that has seen better days, and shorts... like those cotton shorts with elastic waist. He also had a stale type body odour. AND he took his sports shoes off during the flight and his feet stank. Not kidding. (Luckily it's a short flight).

Then he slipped in the question damn casually, "So are you attached?"

I reply that I'm married.

That shut him up so quickly. It was like flipping a switch. He started reading his inflight magazine intently, and basically ignored me the rest of the journey. Wtf.

I can't remember who I sat with on my flight back to Singapore, I don't even remember if it was a guy or girl. Strange.

You know, when I was single, every time I travelled by plane, I would actually get excited thinking who I would sit next to, and I would always hope it's a hot guy! (but I seldom got what I wanted). Am I the only one like that? lol.

Ok I don't feel so bad about wasting my flight tickets anymore. Good night universe, please start to be kinder to me and those I love.

Anonymous said…
was the wedding ring not big enough to shut him up?
10:32 am

Anonymous said…
Let's say if I'm just a decent single guy (nope, not that big fat guy or even the hot kind), and the airline passenger seated next to me is one hot girl. I'm dying to get to know her, and we're bound for a 5hr flight. What should I do? Should I take my chance? Or should I let it slip, because I'll risk being an idiot - and that's going to be awkward for the next 5hrs.

If I do decide to take my chance, what should I do (or not do) to ensure I don't blow it?

Or do average decent guys like me don't stand a chance at all?

I hope I'm wrong, but I personally am of the opinion that ladies are generally not that open to just take the risk and allow themselves to get to know a guy who'd otherwise be a fellow stranger.
2:34 pm