on August 12, 2014
I was watching the National Day Parade 2014 live on TV last Saturday... kudos to Dick Lee for music direction... thoroughly enjoyed the whole show and it was not vomit inducingly tacky like the last few years. That man has my respect. 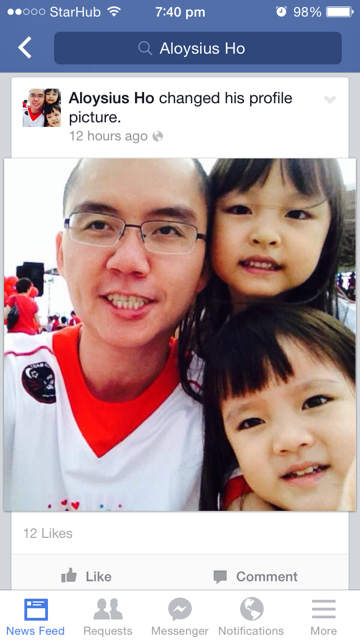 I was logged in to Facebook while watching the parade on TV, because I'm a social media addict, and it was heart warming to see all the National Day updates from my friends on my newsfeed. All fillled with family, friends, love. And good sentiments. You know, you really choose to be happy and embrace all that is good in life. That's the way it should be. 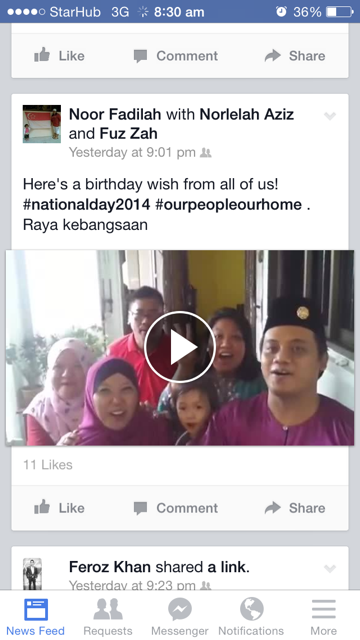 I loved looking at their proud & happy pictures on this day. (Hope you don't mind me sharing your posts which brought me much cheer, but if you would like me to delete, just let me know.) 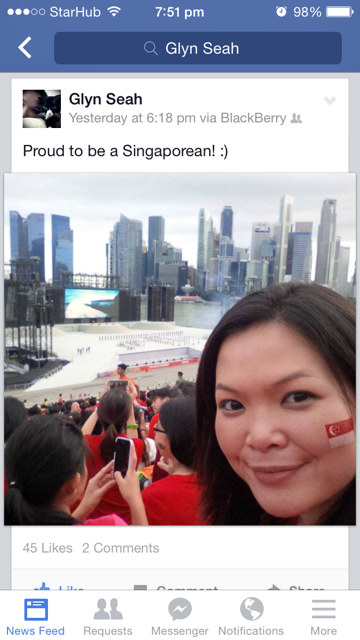 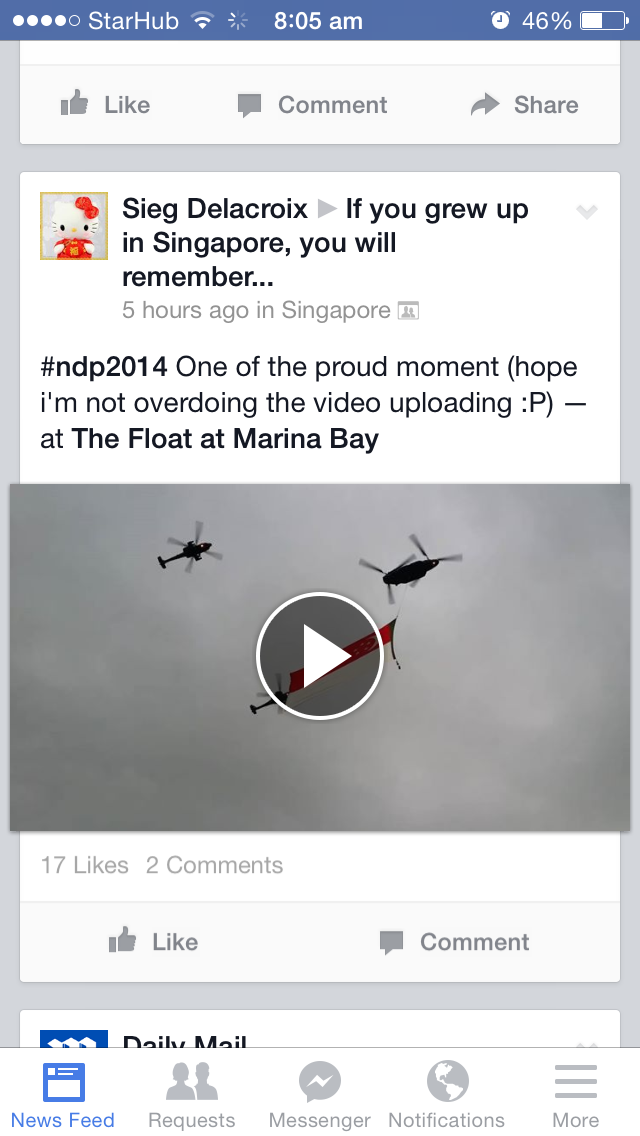 Another thing that struck a chord in me, was when Lee Kuan Yew arrived. He looked so frail that it made me sad to see him weak. I'm sure there were others who felt the same. 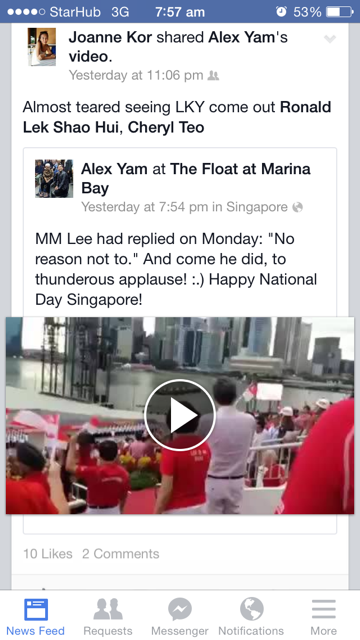 Then it surprised me that some people on Facebook were posting nasty comments about him. Why are they hating on Harry? It's like these people have no sense of empathy. It made them feel good to see him old and frail. They relish it and even laugh. Someone even called him an orang utan.  Even if you don't like how he ruled Singapore, such criticism and wishing ill fate upon others is very poor form. I suppose people who are helpless can only vent their frustrations through slagging. But you should feel like an ass, not feel proud about your lack of class.
By the way, I'm neither pro-PAP nor anti-PAP, I vote based on the choices available. And if there's an opposition I believe can do the job better, I will definitely vote for what I think is best.

I think Lee Kuan Yew has done an awesome job picking up the pieces when Singapore was in shambles 49 years ago, and building our nation to the formidable one we have today. Ok, he may not be the same race as me. And I feel Eurasians in Singapore do not get so many perks in terms of government funding. But I don't expect my government to pick up my slack anyway. So, I'm still grateful for all that Lee Kuan Yew has done.
I am not so bigoted that I cannot see the good he has brought upon all of us. But I see that some of my Facebook friends are not like that. Such a shame.
Calling him a rag doll/ puppet (I assume because there was one shot on tv where it showed someone having to grip Lee Kuan Yew by the waistband of this trousers to support him, and also to help him sit down. Bahahaha! Haters, please take a good look at yourselves, what will you be like when you're 90 huh? There's no need to mock this old man because he has done so much more in his lifetime than you have in yours plus your children's lifetimes put together, so yeah set them a great example by just moaning and mocking an old man.
Yes, life in Singapore is tough but there are pros and cons everywhere in this world. Blame yourself if u cannot succeed, not the government. No one owes you a bed of roses, so stop acting so entitled!For every one of you that leaves this country there are a few thousand others (at least) who are queuing to get in and take your place here. Pffft... if not for Lee Kuan Yew, you would be herding chickens in some shit filled kandang.


P/S - Normally, I never delete comments people make  on my blog, but I will have to delete race related comments here. It's not just one race that is hating on LKY, so don't turn it into a racial thing. K, thanks!

Anonymous said…
" if not for Lee Kuan Yew, you would be herding chickens in some shit filled kandang."

All I know that my friends in Malaysia, Indonesia, Thailand, Hongkong and Taiwan are all doing fantastically well without the albatross that is Lee Kuan Yew.
12:59 pm

jason said…
HJ - while i submit to the fact that he has done a fab job to built to it to where we are today, i dont approve of some of his methods (including persecution of certain people etc). Let us also not forget the other key architect instrumental in the building of SG - Goh Keng Swee. Think about his gumption/perserverance in creating SAF, Jurong Industrial Estate, HDB. This is one individual without whom ALL of us would be herding chickens in some shit filled kandang.
1:04 pm

Anonymous said…
Many people dislike him for the wrong reasons. But hate is not the right word to use on critics. Some look beyond the superficial (beautiful facade and the temporal) which the management of wealth had brought us. This creation of wealth is now a bane or burden to the people who are struggling to keep up with rapid changes or a race just to survive. However, the good news is, such politicking is mostly in favor of the rich and a selected classes of people. The majority will have to be reminded to be grateful for crumbs and die working for the rich.
The problem is with politics. It is Rome's politics. He has not left anything that's ethrnal. Some say. ..looks good now but for how long
1:35 pm

Anonymous said…
I agree. Sure we must not forget other leaders like Goh Keng Swee, but the fact remains that LKY was the PM. Kudos to him that other able or abler leaders did not choose to usurp the throne. Surely it is not easy for a leader to hold on to his various lieutenants especially when times are better. We may not agree with his methods but this is hindsight speaking. At that time most people supported it. Like HJ i choose no particular sides but only who can be a better leader in my ward. Let us recognise we have it better than most other nations, esp compared to those around the region.
1:53 pm

Anonymous said…
This towering city is built on hardcore cash. And it needs hard are cold cash to sustain. Much of the cash comes from pushing up assets value and overpricing talents - such as MPs and Ministerial pay and perks. How long can we maintain the rich quality of life for the elites before the people revoke? How long can your prosperity last? Is it wise to work for MamMon?
2:27 pm

Chan Joon Yee said…
Somehow I feel glad that I was in Taiwan on National Day. I loved the country I grew up in. Yes, my neighbourhood library didn't even have air-con back then, but happiness wasn't defined by wealth alone. While many of our youngsters tend to take everything around them for granted, it's important to teach them that a simple kampung life isn't as bad as they think. Truly sad is a population whose happiness is defined by economic figures and relentless "upgrading".
2:39 pm

Anonymous said…
As an American living in Singapore, I don't know much about this man but I am sure that he deserves respect. People that disrespect him shouldn't be allowed to remain in this country. Sorry that you've been exposed to someone so negative. Singapore, and it's people are wonderful...
Sincerely,
LYP
6:20 pm

Anonymous said…
Singaporeans these days lack compassion and empathy. That's why despite random acts of kindness, there will always be people in need being ignored.
1:15 am

Anonymous said…
We take a lot for granted too. People tend to forget the good and remember the bad.
1:16 am