Someone Told Me My Husband Was Cheating

on July 13, 2014
Yesterday, I had an email from someone who is on my Facebook. I've never met him before (at least I don't think so), but I suppose he has seen photographs of my husband on my FB and blog. 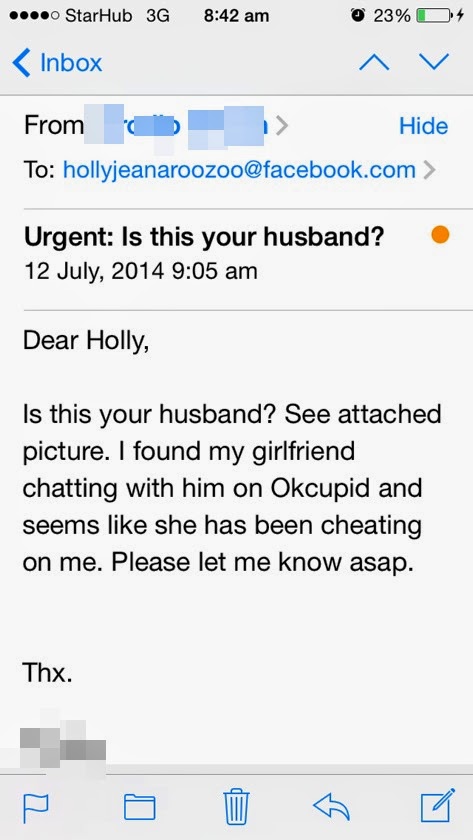 I trust David, but man... did my heart stop when I read that email. Then I thought nah, it must be spam or a bad attachment that they want to trick people into opening. But as I scrolled down, I realised it wasn't an attachment that I had to open afterall, it was a picture that was pasted directly at the end of the email. So I scrolled all the way down. 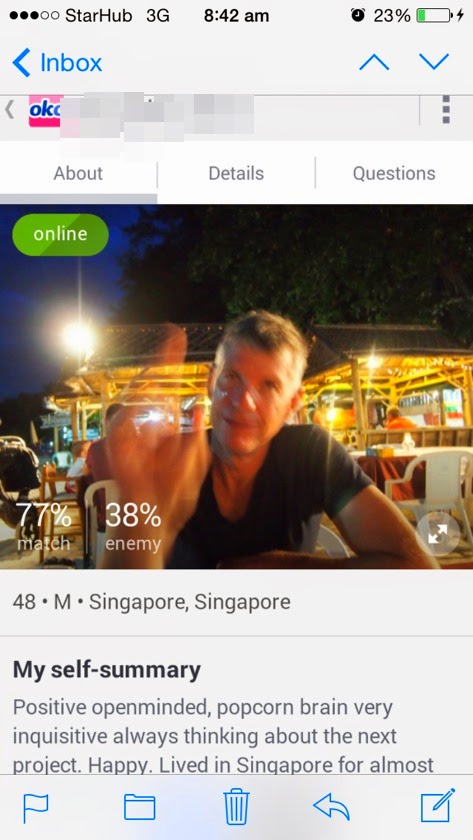 And it wasn't my husband lah! This guy looks like an utter v-neck wearing douchebag (sorry for judging you, Guy who looks like my husband a little). Also, this guy is smiling in the photo and David never smiles for pics. Haha. But ok, for someone who has only seen pics on David on my blog or FB, I think it is very easy to mistaken this guys pic for him. If I hold this pic very very far away, it does kinda look like David in terms of colouring.

He said in the email that it was urgent so I replied to him immediately, I can imagine his anguish. It's not my husband in that pic but I guess for him, it's still terrible news. Anyway, I'm not mad at this guy for sending me this scary email. Actually I'm thankful, cos if it were indeed my husband up to no good, I damn well wouldn't want to be kept in the dark. Then it occurred to me... oh poor thing, this guy had to snoop and then find out his GF is having jolly chats with other men on OK Cupid (which I assume is a dating website).

Some of you may say... chatting is not cheating, lah!. Yes, people in relationships can have friends of the other sex. But honestly, if you're in a relationship... is there really a need to go specifically looking to make new male acquaintances? I really don't get it.

If you're in a relationship and still fishing around in bars, or dating websites/apps then you're most definitely looking for something better to move on to or to cheat. That's my opinion. So if you catch your partner making 'friends' online (secretly behind your back) and they say that it's harmless, just to make friends. I call bullshit on that.

Anonymous said…
does looks like David to me =x but I think David probably doesn't wear v necks and more shirts?
11:02 pm

Estelle Kiora said…
Wow it actually looks quite a bit like David to someone who only sees photos/hasn't seen David in more than a year. I totally agree that flirting online or friending online is still unfaithful behaviour, on both genders. If I truly love my future husband, I will delete my Tinder account. Dear future husband, you may hold me to this! ;)
3:13 am

Anonymous said…
There are plenty of younger SPGs waiting for their golden moment..heh heh
4:38 am

Holly Jean said…
Yah he doesn't wear v necks at all... Even if we are out shopping he won't even look at them (he thinks it's very gay). But he's super casual always round neck tshirt and shorts.
6:39 am

Holly Jean said…
Completely agree Estelle! So uncanny! In fact if this had happened after only the first few dates with David, I probably would have thought ehhh it IS him in that pic. Lol But now, after seeing his face for 3 years, tht pic is not even close enough to be his German doppelgänger lol
6:42 am

Anonymous said…
is that not anthony bourdain?
8:42 pm

Dee said…
I caught my ex-boyfriend sexting a friend, which I forgave him for. But later caught him on Okcupid messaging other women. The messages went along the lines of ''although the site doesn't give us a high compatibility rating, I beg to differ. Coffee?' When I confronted him about it, he said it was innocuous and that he was never looking to meet with other people. Do you buy that? Anyway I dumped his sorry ass.
10:34 am

Dee said…
And I know what you mean about that grey area - cheating/ not cheating. A lot of my acquaintances said, 'Well, technically he didn't actually cheat.', with them defining cheating as the physical act of intercourse. But there really isn't a concrete definition to cheating, is there? At the end of the day, if you're ashamed to have me find out about something, then it clearly isn't platonic.
10:44 am

Holly Jean said…
SOOOOO glad you dumped his sorry ass.
I consider it cheating.. the intention is definitely there.

''although the site doesn't give us a high compatibility rating, I beg to differ. Coffee?' WTF ... i wanna punch him for you.
11:01 am

brendy said…
I am out here to spread this good news to the entire world on how I got my ex husband back.I was going crazy when my husband left me and my two kids for another woman last month, But when i met a friend that introduced me to drehiaghe the great messenger to the oracle of dr ehiaghe healing home,I narrated my problem to dr ehiaghe about how my ex Husband left me and my two kids and also how i needed to get a job in a very big company.He only said to me that i have come to the right place were i will be getting my heart desire without any side effect.He told me what i need to do,After it was been done,24 hours later,My Ex Husband called me on the phone and was saying sorry for living me and the kids before now and one week after my Husband called me to be pleading for forgiveness,I was called for interview in a very big company here in USA were i needed to work as the managing director..I am so happy and overwhelmed that i have to tell this to the entire world to contact dr ehiaghe on his personal email address and get all your problem solve..No problem is too big for him to solve..Contact him direct on: ehiaghespellhome@gmail.com and your problem will be solve.