My Dog Can't be Part of a Pack

on February 22, 2014
Took Lola to the park yesterday evening, as we usually do when we have drinks at the bar by our park. As usual there were many dogs and children playing on the lawn.

Lola usually sits on my lap or just lies down under our table quietly observing the goings on. But David's friend Mark was with us yesterday, and he took Lola to go 'play' with the other dogs. This is something I never do because quite frankly, it scares me.

When puppies and small dogs get all jumpy and playful around her, she gets so scared. She's fine with bigger or calmer dogs who just come over for a sniff (even though she's still scared and has her tail between her legs). But it's the more hyper dogs that freak her out.

Anyway, she started growling and snapping at some dogs. And even though Mark had a good hold on her leash, and she never actually touched the other dogs while she lunged in for a snap... it was still scary to watch.

And then some toddler came up behind Lola, excited to touch her. And I was like... noo please don't let your kid touch my dog she might bite. You see, usually Lola is ok around kids, scared, but she won't snap at them. But just the whole situation yesterday, and she was already freaking out around the other dogs. I was worried that if some kid surprised her by tugging her tail from behind, she might think it was a dog trying to hurt her, and turn around and bite or something. Of course that didn't happen but it really looked like it could.

Another owner with an alpha dog, which  was very calm and gentle around Lola so Lola didn't mind his dog at all... he said to take Lola down to socialise with the dogs in the park more often so she'll get used to it.

But oh I don't know. She seems to be fine without the company of other dogs. She's already 4, and she seems happy to just sit in my lap and just watch the others. I don't think she's aggressive by nature... cos when I take her for walks and other dogs on walks start barking at her, she just ignores them, never barks back and never wants to like charge at them...  if it's particularly close or loud and she gets a scare, she will walk very close to my legs or in between them.

And she's happy to sit in my bag when we go out. She's quiet and so well behaved. And at home, she entertains herself either sunning on the balcony, rolling on the rug, or just she just sits next to me while I work on my laptop. She barks at strangers at the door, and our mailman. But once she knows you're not a stranger and she's not scared of you anymore, she'll just want to sit in your lap or roll over for belly tickles from you. At night, she jumps into bed and snuggles between David and myself, making purring sounds as she falls soundly asleep. She really doesn't seem like she's wanting any more. So should I just avoid socialising her with other dogs? Would that be selfish of me?  :( 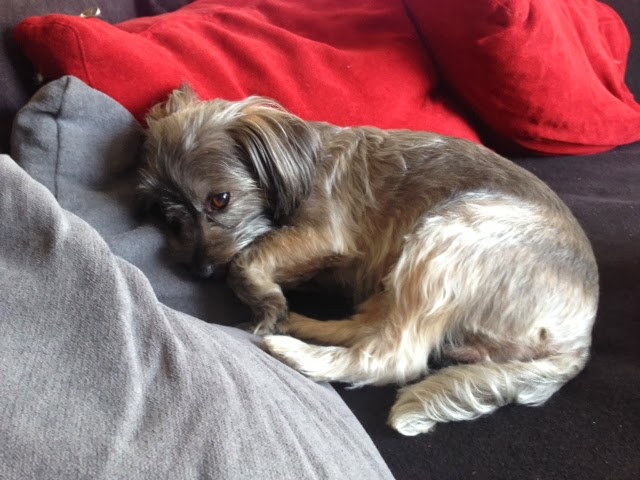 Reddie said…
Should just let things be. She's happy the way life is, so are you. More of other well - intended advice are going to come your way especially when you have kids. When you try to do what everyone else tells you to, you'll end up frustrated and unhappy. Unless this is something you really want to do.
1:12 pm

greener said…
let Lola make the decision? Perhaps try for a week or 2 and see how it goes... at least that gives her the option to find new friends.
3:07 pm

Anonymous said…
Sounds like she lacks confidence (weird huh, who knew dogs could have this condition too?). Hope this helps: http://www.cesarsway.com/askcesar/anxiety/Persistent-Anxiety-and-Fear
12:25 am

Anonymous said…
This is something that you as a fur parent can help her overcome. Whether it is a small fluffy dog or a big muscle dog, it doesn't matter. They all deserve help to understand and learn how to socialise. A nervous dog will always be a dangerous dog. Professional dog trainers can help you, or you can start training and socialising your dog in the parks (treats or her fav toy). You need to reward good behaviors and be encouraging when she starts to display any curiosity around any calm dogs.

In the meantime, if anyone and especially kids come up to your dog, you need to let the parents know that your dog bites and have them refrain their kid from petting the dog.
9:18 am