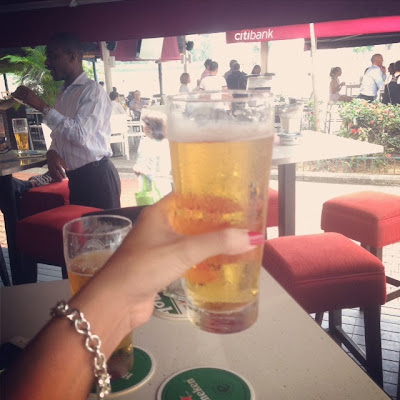 And another year has gone past. I think that as we get older, time seems to past even faster. While I'd like for things to slow down more so there's more time to smell the roses... and oh, just flip through channels on Tv... I'm glad that 2013 is over.

I'm a Monkey (and so is my husband)... the year of the Snake has not been kind to us.

David mentioned yesterday that he said to a colleague while they were at work... that he's glad the year is ending because "only bad things happened in 2013. The only good thing was getting married."

Then his colleague joked ,"Are you sure marrying Holly is considered a good thing?"

(yeah yeah... so funny I forgot to laugh)

Well anyway, seeing that we got married on 26th of January in 2013, it was still the year of the Dragon and it didn't become the year of the Snake until a couple of weeks after.

The whole year of the snake itself (from February last year until this point now)... I'd have to say was uneventful for me... in terms of work, while I still had an okay amount of work coming my way... I never had any big projects or work that made a difference in my life.

David's work has been very very shitty in 2013. Of course, I listen to all his work related problems and grievances every evening, and feel bad because I can't fix any of it for him. It's just arse luck.

We want a whole bunch of things in life that need money... and while I wouldn't say we were poor or financially in the red... money just went out a lot in 2013 (bills, mortgages, bad investments). And we are both the cautious sort when it comes to finances.

Now I'm starting to want a baby, and I see all my friends starting their families... but my husband doesn't think we're stable enough yet (in terms of finances and his work). So hopefully, 2014 will be a better year for us both and if all goes well for the first half of the year, then we can start planning for a new addition to the family.

(Fingers crossed no more shitty things happen with his work, ok? Otherwise we'll have to keep using contraception and put off starting a family. And if his work woes keep holding us back from starting a family, I might start to resent him. I know, so bad, I don't want to feel resentful, but I can already feel it creeping in).

Here's to a better year ahead! I really need it... because I don't think I can do 2 bad years in a row.

Jess said…
What does your husband do? Actually you know, a baby doesn't cost that much. At least not in the first few years - i mean, you dont have to get expensive stuff like branded clothes etc and it can cost very little (apart from the first initial birth - but that's subsidised if the baby is Singaporean). It only gets more expensive when they go to uni, or if u want to put them into expensive international schools. Time is more a factor when it comes to having babies... not $?

Michelle said…
Good luck Holly!
2013 was a bad year for me too. I went through horrible breakups where i thought he was the one. I also hope 2014 would be a better one and a kinder one for me too.

Anonymous said…
Yes, best of luck Holly!
Lets pray the horse yr will be a superb year for us all.
4:13 pm

Anonymous said…
It could be he has reservations of having a child at his age - on top of the instability he faces at work. Be patient with him and make sure that resentment doesn't creep in further. Hopefully 2014 will be kinder.

Have a fulfilling and fun baby-making process in the meantime - with or without contraception! LoL!
1:35 pm

shupaholic said…
This comment has been removed by the author.
8:46 pm

shupaholic said…
All the best, Holly
!I think you're an incredibly capable woman and screw that person who made such a snide comment to your hub.
I had a baby not long and I can tell you what are the essential stuff you needa get and not the misc crap which people often spend on :)
Can save heaps!
8:55 pm

Anonymous said…
Good luck!
Having a baby is only natural - if it comes, then good.
If not, please don't resent your partner. Eventually, it will fester and break apart the union.

Believe me, I'm going through one now....

Anonymous said…
Ever thought about getting a job so you can afford a child? And that he might resent you for not contributing equally? Seems kinda selfish if you ask me... I want I want I want...
3:12 pm

Holly Jean said…
But I do have a job and contribute. Apart from my blog, the bulk of my income comes from writing (for myfatpocket and Nsportal) and then I model on the side as well. I also teach at a language centre every Wednesday. I make more now than I did when I was employed full time .
5:32 pm

Anonymous said…
dear holly, i think you're doing great. you don't have to answer to anybody if you know what you're doing! just go with the ebb and flow of life, when the time is right you will get what you were asking for :) and i hope that is soon for you!
3:07 pm