Why are parents so anti-discipline now?

on October 22, 2013
Did you hear about the parents of students at Raffles Girls Primary School who made a big stink about their kids being made to stand (for 15 minutes... oh the horror!) everyday during school assembly? 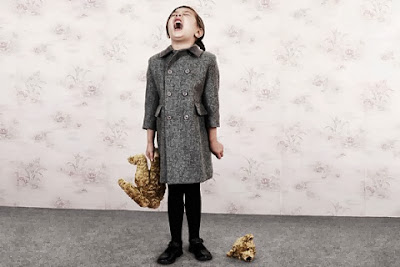 Ok maybe 3 months is a bit excessive... only because in my opinion that's too long a time frame for a punishment to remain effective. But I suppose it was working, that's why they continued with that routine for that class. So these kids would be reminded, oh I don't understand simple instructions... I'm standing during silent reading, it is a reminder for me to shut my gob. It is not chatty reading time.

If it were up to me, I would tape their mouths shut with masking tape or make them bite their shoes. But hey, that's me.

Parents are too protective of their kids these days. So now, that class and other pupils of the school will know.. HAHA... you tried to discipline us, but our parents said NO! BAD TEACHERS! BAD PRINCIPAL! and ... so that means we are right, and you shouldn't make us stand for not being able to adhere to simple rules. Up yours!

It reminds me of the time when I was teaching in secondary school. A boy from a Sec 1 normal tech class... wasn't his first time being a brat... asked me if he could go to the toilet. I said no, sit down, you can go later. I wasn't one of those teachers that would make a pupil hold his bladder for hours. I knew he didn't need the toilet. he saw some older normal tech students go past the classroom and signal to him. They would often meet at stairways, etc, during lesson time. No idea why, but for some reason they thought it was cool.

Anyhow, he just looked at me defiantly, and walked out of the class anyway. I didn't chase after him, or scream or whatever. He had a happy time gallivanting and returned 15 minutes later. I just went by protocol.... wrote down his name on the discipline form. (The school had discipline forms where you could fill in the offence and hand in to the discipline department at the end of the day. This ran the gamut from truancy, to fighting in class, or even regularly not turning in homework)

A couple of days later, I get a call from a screaming mother. Her son was punished, and she was screaming obscenities at me for punishing her child. She said that he really needed to go to the toilet, and I was unreasonable.

Anyhoo.... the fat little shit of a child was back in class, smug, and still as defiant as ever. Wonder what's become of him now, as an adult (well, he must be about 18 now). I would put a whopping huge bet that he's probably in prison, or a boys home, a druggie or some loser selling pirated VCDs on the streets. Something along those lines. Ah... we could have saved him from a life of loserdom, help him realise the importance of an education and being responsible for his actions. But his mother wanted nothing of it. *clap clap clap*

When I was in school, when my class was noisy during assembly, we had to stand and sit and stand and sit... countless times ... IN THE SUN as our after recess assembly was in the parade square, not the school hall. Did we die? no. And by the way, I wasn't even the one making the noise! But it taught me to take the punishment collectively as a class. And it also made some of the noise makers feel bad that the whole class had to be punished because of them. It also gave me the foundation for shapely legs and strong thigh muscles. (I'm awesome at long jump btw).

Now as an adult, whenever I attend an event or seminar of sorts where one person is speaking to the group. When I see other adults chatting away and not paying any attention to the speaker (so rude!!)... I think... hmm... they don't know basic courtesy, they must never have had much discipline when they were kids. What's so difficult about shutting up and paying attention to someone for a short while?

And why are parents so anti-discipline now?

Anonymous said…
I entered the teaching industry not knowing how protected (by parents), rude, cocky, disrespectful the children are these days. I'm going to be a full-fledged primary school teacher next year. I can't wait for the bond to end so that I can leave. I get this feeling that someone is going to slam you for "condemning" the boy in your class. Just want to say, you wouldn't know what it's like till you've experienced being a teacher.
11:36 pm

Anonymous said…
I feel your pain. I'm only 22, I never have to deal with kids, and I'm already worried about what kind of peers my future child will have! And this is just from seeing random kids when I'm out. Kids are terrible these days, but their parents don't care. I'm not sure if you've read about China's little emperors, but perhaps this article can shed some light on this issue: http://www.independent.co.uk/news/world/asia/onechild-policy-chinas-army-of-little-emperors-8446713.html

Pretty sure if we're not careful Singaporean children will end up like them.. only a matter of time.
8:01 am

Anonymous said…
"I would put a whopping huge bet that he's probably in prison, or a boys home, a druggie or some loser selling pirated VCDs on the streets."

I was the kind of student that would sweep the classroom floor and pour all the dirt on my teacher's head. Simply because I didn't like her. Probably also because I was an immature dick, and I didn't grow up in the kind of environment that most of my well-behaved peers did. Which is why I completely agree with you that parents shouldn't go too easy on their kids.

Fortunately though, as rebellious as I was, as much of a failure of a parent my single dad was, I'm not in prison, or a druggie, or a loser selling pirated VCDs on the streets now. And to all the teachers who believe that their rebellious students would grow up to be one of those, here's a big fuck you to all of you. You speak about how parents shouldn't be anti-discipline....well. So filling in a form that sends your student to detention class means you've done your part as a teacher, huh?

I feel so sorry for your used-to-be rebellious ex-students.
9:21 am

Holly Jean said…
Hey, read properly la. I'm not betting that all rebellious students end up as druggies etc. But I said I would put a huge wager on that particular student ending up as a burden on our society.

And, filling the discipline form doesn't mean big fuck to me. I was making it clear that I had followed protocol... Not that I took it overboard and smacked the kid with my bare hands or anything like that.... So his mother's psychotic rant against me was unwarranted.

Anonymous said…
"If it were up to me, I would tape their mouths shut with masking tape"

LOL I had a 4th grade teacher, she did that to kids who wouldn't stop talking. One boy the worst in the class got his mouth taped shut a number of times. I remember him sitting at his desk with masking tape wrapped around and around his mouth and head, and more tape plastered all over his mouth and jaw. You can bet not a word out of him for the rest of the day!

This was early 1970s so no one ever imagined our teacher might get in trouble for what she did. It was just classroom discipline. And that boy shaped up (eventually) and turned out fine.
10:59 pm