Newspapers and News on TV will Die Out Some Day

on September 19, 2013
David usually sleeps early on a weekday night as he has to wake very early for work in the morning. And I always make it a point to go to bed the same time as he does... I just feel it makes us closer as a couple.

Well anyway, I was in bed but I couldn't fall asleep last night because my mind was buzzing. I had just received a couple of work related emails that evening so my head kept coming up with ideas and plans instead of winding down. I'm the sort that can't switch off and leave it for tomorrow.

So burried under my sheets, I browsed through Facebook. Immediately something caught my eye. A Facebook friend's status update was about him having to run out of JEM (a new mall in Jurong) because it was collapsing.

I thought it was a joke... but I went to Twitter anyway, just to see if there was anything on the feed about it. Sure enough, people were uploading pics of JEM live just as the event was unfolding. So it WAS true after all... the ceiling had caved in. 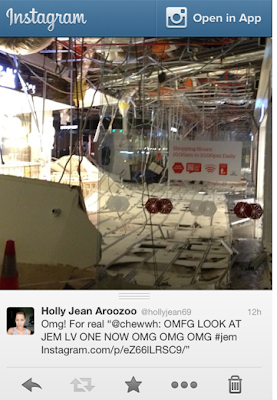 It was quite exciting, being able to see everything unfold live. I didn't Google it last night, because it would be too soon... I just relied on Facebook, Twitter and Instagram updates. I'm sure news of this event is all over the internet by this morning.

I've asked my friends before.... where do they get all their latest news updates.. and the majority get it from Facebook as well.

When i was a child, watching the evening news was a big part of family life at home. Especially so if something big has happened. We'd have to wait for the newspapers the next day... or the next broadcast of news on TV in order to get our updates.

I think newspapers and TV news programmes will eventually die out with my parent's generation. It's not as quick, not as interactive, not as available nor as accessible as what's out there on the internet. Almost archaic.... like printed encyclopedias, atlases and almanacs.

Kuen said…
Don't think it will die out cos people will still be looking for Official confirmation and detail read. But to get the REAL deal, social media will be the one.
12:17 pm

Kuen said…
Just to add, but people have to post sensibly and truthfully. Choosing the words carefully before posting else it may cause unnecessary panic for some cases or misunderstanding can occur.
12:20 pm

Anonymous said…
I personally don't think tv news will ever be dead.. because it doesnt just focus on one particular news story. People watch it for other news globally and locally. Facebook news is always on some "in" news like Jem's ceiling. I must say that to supplement tv news and newspaper, facebook and twitter are good sources to get additional info/pictures.