Holland Village- My hair and Esme The Guide Dog

on September 09, 2013
I just did my hair at Shunji Matsuo @H.V. with my stylist Ethan. He rebonded my fringe... time for a small change :)   and also did hair treatment. Love love love the results. 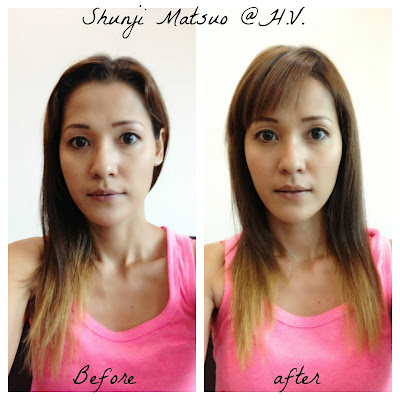 Didn't colour my hair because the colour he did for me a couple of months back was still nice. I wanted to leave it that way.

After that, I went for my Haagen Dazs fix at Holland V. Haagen Daz's Macadamia nut has got to be my favourite flavour of all time. Mmmmmmm....

Then when I was on the train home, with the awesome taste of ice cream still on my lips...I browsed Facebook on my phone and saw that Esme the guide dog and her owner were refused entry into that same Haagen Dazs store recently :( . Esme is 1 of 2 specially trained dogs in Singapore and has been here since 2011. She works for her owner who is visually impaired.

So disappointed that the staff there do not know the difference between a pet dog and a service dog who is guiding someone who cannot see! Argh.. why are we such a dog phobic country!!! I know we are not pet friendly in public places, but a guide dog is an exception.

I think Haagen Dazs will lose much public favour because of the poor handling of this situation. Will it stop me from having my macadamia nut brittle? No... probably not. But I'll probably stay away for a while, because that incident has left a bad taste in my mouth.

Unknown said…
Wonderful, she is looking more pretty then before. Her hair cut change her look.

Jasmine said…
Not nice :P Hair looks frizzy and ironed out at the same time. Hmmmm.
7:20 am