on June 27, 2013
I am a Hello Kitty fan... loads of stuff around my house is Hello Kitty. My current favourite items are my Tokidoki Kitty wallet and my iphone5 case. But I've never collected the Hello Kitty plush dolls from MacDonald's ever. Quite frankly they're not appealing. (Also, I'm not a plushie sort of person.) 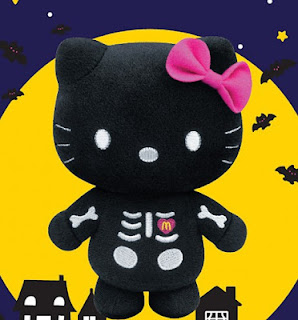 All over the internet in Singapore, people are talking about re-sellers of these Macdonald's Hello Kitty "collectibles". (Erm... I don't mean to offend you but if something is indeed limited edition and a collectible they need serial numbers, and production quantity is like less than 100 pieces.... not some mass produced toy from MacDonald's. It's a marketing gimmick).

People are enraged that the prices of these toys are pushed up to like A HUNDRED THOUSAND BUCKS on ebay. 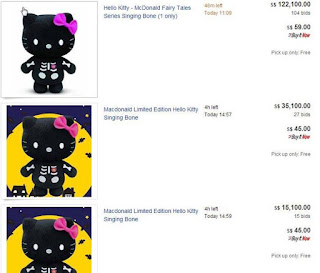 Hello anutie uncle... you never use ebay before is it? Those are obviously fake bids. People drive the prices up on purpose.... they are not really buying so don't get your panties in a knot over it. You don't want to pay $100K for that black singing bone kitty, then just click the BUY NOW option and get that same thing from that same seller for $45 lah. -_-

You don't want to pay $45? Then don't buy but you cannot insist that the re-seller is a crook and should sell it without a profit. NewsFlash! If it were selling for $10 or what... you still would not get it... the demand is much higher than the supply at that price. Simple as that.

That's the price the seller has set because he has the kitty, and he wants to sell it for that price. Maybe if people only want to pay $10 for it, then he would rather keep the kitty for himself instead.

I don't know what the seller went through to get it (queued for 2 hours in the haze or whatever)... but that's what he thinks it is worth now. Profiteering? yes. Selfish? Perhaps. But is it a crime? No. Is he obligated to sell it to you for like $4.90 (or whatever Macdonald's is charging) after he went through the trouble to get it and you didn't? Fuck No. 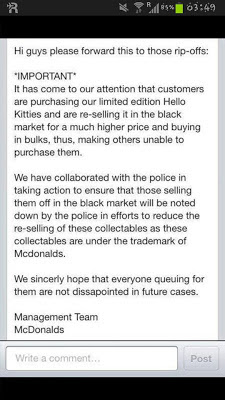 At the end of the day, it's just a Hello Kitty Doll from MacDonald's. Your kids love them so much they HAVE to have them? Well, too bad... perhaps it's time to teach them that simple lesson about life. Don't worry, they won't cry until die.

You want to complete the collection? Then buy them from MacDonald's or buy them from a re-seller at a price you think is worth completing that collection of yours. To me, I don't think it's worth queuing up hours for, or paying extra for.

P/S - over the past couple of weeks, I've had readers offer me their spare Hello Kitties from MacDonald's because they know I'm a Hello Kitty fan. Aww... thank you for your kind thoughts, but I'm not collecting these plushies.

Jessica Y. said…
I'm a huge fan of hello kitty, and i LOVE plushies. My room is filled with them, but sadly, i'm one of those idiots falling into the hands of mcdonalds over their marketing gimmicks.

TBH? I collected them, wasn't really the mad-crazy queue overnight kind.
I got it like days later, till the frog prince came out which sold out within hours, then the other 2 was like, midnight queue, people raging about how the queue is taking very long, people buying 100 plushies [yes, a guy did that] and selling it at $158 each when it cost $4.60. What's worst? He bought 100 meals. And when he couldn't take anymore, he carried the box of kitties and abandoned all the meals and drinks that the staff painfully packed into boxes for him. My point being? Wow, he just wasted SO MUCH FOOD when people are dying because of hunger.
All these because of hello kitty? No. It's because of profit.

And then i was short of 2 pieces of hello kitty.
admittedly, i was really sad, but not stupid enough to pay $50 for each plushie.
I went around a few mcdonalds ytd hoping to get a piece, only to be told 'sold out' over and over again. I looked at the crowd in awe. They started queueing at 9pm, really? Wow...

Even though i love hello kitty, i have to admit that it's a total insult to hello kitty, if u actually felt the actual plushie. The quality is VERY bad. [ well it's only $4.60..]
Such an insult to hello kitty.. but what can we do? Nothing. Except looking at food go to waste, people paying exorbitant amount just to finish their collections, etc. I feel really sad at what i'm looking at.
My own fellow country mates, doing this kinda stuff... Even resorting to fighting because of HK and then scolding/insulting each other.

Makes me really wonder in times of needs, would our fellow country men help one another? I guess not. If simple things like hello kitty can turn out like that, during war times when food supplies are minimal? They might even kill you for flesh.
Don't know why they can't see what a 21 year old girl can see. Sigh...
5:28 am

Joey Anna said…
I think you've got a great point there about having serial numbers and having less than 100.
6:02 am