Don't Be a Sucker for WOW

on August 08, 2012
Today's topic is actually to encourage you to give love a chance. Don't be caught up in the unimportant stuff.. like how other people think. 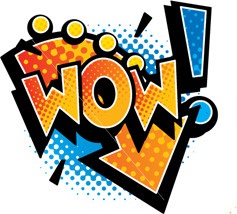 Also, don't be a WOW woman. I have a friend, who strikes me as a WOW woman. She’s all about finding the one man who knocks her socks off. She wants FIREWORKS. Without it, she hardly feels it’s necessary to give a guy any time or attention.

The Wow Woman (and there are many of you out there just like my dear friend) can’t really define what she’s looking for but swears she will “know him when she sees him”.

Every once in a long while, she meets someone and feels that Chemistry. They have an incredible first date.... and suddenly-  He's The One!

Then there are only three scenarios that play out from that point:

Scenario One:  They have a great first date and he never calls her again. The chemistry wasn't mutual. She's asking herself... "Why? What happened??" But the man's just thinking  “Well…it wasn't that great a date!”

Scenario Two: He feels an instant connection too and he wants to learn more about her. He calls a few days later and asks her out again. But her intensity bowls him over. She may not go psycho on him but he can already tell she’s decided about him and latched on. That’s unimpressive, he panics and he disappears.

Scenario Three: They have a great first date. He instantly starts SMSing and calling her, and they both jump in to sex very early. They talk and/or see each other every day. She’s more and more convinced that her initial feeling was right on: he’s amaaaaazing! Then, soon thereafter, he either disappears or explains that he’s just not ready for a relationship.

(That's because he's a Wow Man. He eventually realises pretty quickly, though, that she’s not the woman he wants. At the same speed he created the situation, he extricates himself.)

Even when it’s over – after one week or a few months – she can’t give up the dream of what might have been. She holds on to her belief that they were great together. What a waste...

NO!! It wasn't a waste, because it was nothing in the first place. Stop being a wow woman dropping great men because  you are searching for that one and only WOW. It's not real.

It takes a lot more than just an initial WOW to make a good relationship last. Trust me, life and love with a real man is so much better than chasing after an elusive fantasy. Give him a chance.

Wear Red on your Date for that Sexual Edge - How the colour red makes women appear more attractive to men.

Top Places in Singapore to Play Pick Up with your Man- Fun public roleplay fantasies you can easily act out with your BF/husband. Includes tips and things to prepare and look out for. 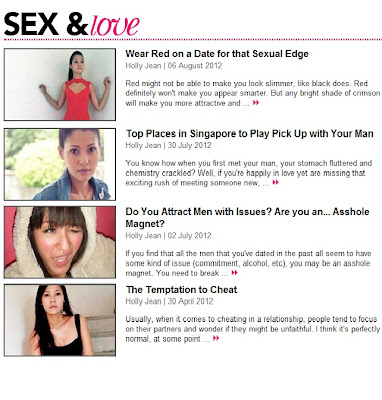 Anonymous said…
wow Holly, thanks for the wake up call. learning to give up that silly dream of what might have been now!
9:58 pm

Anonymous said…
I have been in Situation 3 quite a few times haha.
9:20 am