on August 14, 2012
Earlier this year, my brother wrote a play called Bedok Reservoir. He then went on to do the prose version of his story and great news is Books Actually is going to publish the play & prose duo edition of Bedok Reservoir !

This same gripping story - Bedok Reservoir- is going to be produced into a stage play too! However this stage play is crowd funded, so your help is vital. 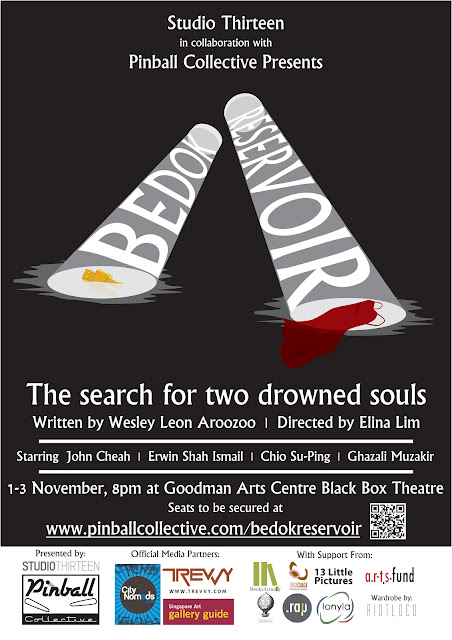 Studio Thirteen in collaboration with Pinball Collective needs YOUR help in producing its first staged production of ‘Bedok Reservoir’!

Show your support by getting tickets at www.pinballcollective.com

It's a crowd funding initiative via pre-sales of tickets where the public is given a role in creating Art (and making history in the Singapore Arts scene!!) and they need your support in order to make the stage play a reality.

This is the trailer:

Please help out by
Liking their FB page: Here.
Getting More info &/or tickets: Here

Thank you for your support guys!

P/S- I'll give out an autographed copy of the book Bedok Reservoir once it's published :) ... Details on that later.

Evangeline said…
Got me interested... Gotta find someone to watch with me...
4:05 am