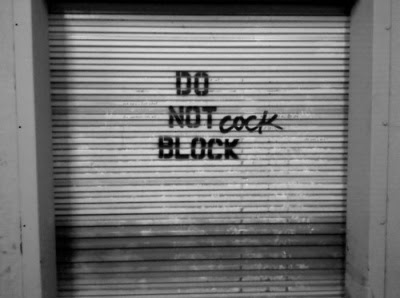 Are you guilty of being a cock block?

To cock block is to prevent another person (usually intentionally), from scoring (or having sex... whatever you prefer to call it) with another person.

Even though I am attached, I make it a point not to cock block my friends. When at parties, I play wing woman instead of tyring to suck up male attention. I have what I want, I don't feel the need to pull other men.

But cock blockers usually have their own agendas... they are usually either unattractive, or attached (and therefore not allowed to flirt when in clubs) or just simply jealous and will not allow anyone in their company to get luckier than them. It's selfish really.


Many years ago, at a bar, a really reallly reaaaaaaaaalllllly hot guy came up to me and started chatting me up. And then Swooosh... in comes a friend (who is attached, btw) and she cock blocks by saying, "You know she has a Boyfriend right?"

Her rationale was that it was supposed to be a girls night out (since when? Since she realised she wasn't getting any male attention?) . Okay.

Then again... on the flipside, I've heard my guy friends telling me stories of waking up the next morning with like really fugly chicks and then thinking "OMG WHAT DID I DO?!"

So yeah.. SOMETIMES people do cock block because they are looking out for you... and not for selfish reasons.


So... bearing in mind that ultimately, YOU are responsible for your own decisions. And that alcohol can and will affect your judgement... I will share with you various methods of getting rid of CockBlockers.


1. The most common of all cock blocks is the MOTHER HEN. She's the woman who keeps an eye on all her girlfriends on their girls' night out. If you spot a mother hen around your potential chick... try chatting up the mother hen. Include her in conversation instead of trying to block her out. You can even compliment her.... if she likes you enough, she may not stop her girl friend from talking to you.


2. Usually in a big group of girls, there's bound to be a FUGLY. Now for some men, a FUGLY is a last resort. But, some men prey on FUGLIES because they're easy targets. Hot girls have men bending over backwards for them, and they know they can take their pick for the night. But FUGLIES on the other hand, are not accustomed to such luxuries. They are easy targets if you do not want to face rejection and are new to this game. No one cockblocks their fugly friend from scoring...maybe out of pity.


3. If you insist on the hottie, and don't want the FUGLY, then you need to get a FALL BUDDY who has relatively low standards and will hook up with the FUGLY. If the FUGLY is kept busy, she will not try to fight with you for the attention of her hottie female friend. Do note though that you owe your friend big time for this and you will have to return the favour by jumping on the grenade someday soon too.


4. ALCOHOL. It may give you confidence and bravado. |When given in copious amounts to the hottie, it might make you appear much better looking even.... but the ultimate cock block of the night (after ALL that effort!!!) is when someone vomits all over, or when you cannot get it up!


Are you guilty of cock blocking or have you been cock blocked? :)

Jessica said…
I am simply appalled and shocked that you would categorise women according to their looks! And just fyi, before I start attracting strawman arguments about MY looks, I am neither obese, short, or ugly, so this has nothing to do with me personally. I am just shocked that you are so stunningly narrow minded and uneducated to make such ridiculous assumptions about plain girls - that they are somehow second rate to Hotties, and are easy to score with, only capable of attracting guys with "low standards"? I expect such absurd and unintelligent rants from dumb college dropout guys, but you? Thought you were above this!

For your information, the plain girls I know are very intelligent, confident, classy, jet setting, career women with drive ... does that SOUND like these women are second rated low-standard ladies who would be easy to bed?

I bet many of your so called HOTTIES would be second rate to Plain Janes when it comes to personality, achievements, character and intelligence!!!!! So stop judging people by the way they look! It's especially shameful when it comes from a woman!

Pity you have blinkers on! You need to remove them, gain better insight, get educated, broaden your views, place less emphasis on appearances, and try to get some beauty inside of you instead.
8:13 pm

Anonymous said…
I'm a man. A damned good-looking one, too! When I go to clubs and intend to pick up girls, I don't care whether she is a high-achiever, whether she is a Harvard-grad, whether she has high IQ. What I care about is what she looks like. Whether she is HOT enough. If you asked me to pick between a young, hot waitress or bar girl and a high flyer like the CEO of Temasek Holdings, Ho Ching, I will definitely pick the hot bar girl/waitress!! That's why you have the terms hotties and plain Janes! Men like me don't pick up or even talk to plain Janes. We go for the hotties. This ia a painful fact of life. If you're just a plain Jane, then you have to settled for second best......the not so hot guys! ;-)
3:50 pm

Anonymous said…
Or maybe people cock block because the whole group of them just aren't looking for any male attention?
5:49 pm

Anonymous said…
To the second commenter, who's supposedly a damned good looking guy --- it doesn't sound like you care about anything but looks when you pick up girls, and that's your prerogative. But I don't think you can speak for ALL hot guys. My husband talked me up in a club and he's sizzling HOT (he used to model in his early uni days)! He was taken by my confidence and I hooked him with our conversation. I can site many such examples of hot guys hooking up with plainer girls. So I disagree with your "painful fact of life", as not ALL hot guys are so shallow, and I, a plain Jane didn't have to settle for a not so hot guy!But the point is that I don't even care about my husband's looks, and neither does he care about mine. I didn't settle for a creep who only goes for appearances, and neither did my husband. Just because you are HOT doesn't mean you've got to be shallow or a player or someone without standards for inner quality in a person. I suppose there ARE Hotties out there who aren't shallow and look beyond appearances, to the more important things in life than getting their jollies off - and THAT Mister, is the fact of life.
4:08 pm

Dennis She said…
Oh come on, give Holly a break. She was really just citing the dynamics of cockblocking.

There are enough cocks to go around for everyone.

It's just hooking up in a club - guys know better to wed/date the right girl. Homogamy, baby. This, is a fact of life.

Anonymous said…
Duh, this post is about picking people up in the clubs, which mostly are ONSs. Why on earth would you want to care about character, etc.? Of course you'd pick the good looker/ someone who has the moves on the dance floor!

Anonymous said…
Eyeroll at these people. The article is TONGUE IN CHEEK. It's not meant to be taken so ridiculously seriously, down to exact "labels" & definitions. Of course the world isn't just divided into fugly & hottie. You people need to grow a sense of humour -_-
9:34 pm