Sometimes I Do Get Pissed Off

on July 28, 2011
I really wasn't sure if I wanted to show this on my blog. I don't want people to hate this guy. I don't know him. Never met him. I am sure he is probably a nice guy to his friends, has a GF/wife, and will probably one day be a father to kids who will look up to him.

So to protect him from being hunted down on FB, I've blanked out his last name. But if you do indeed know this guy, please do let me know which magazine he works for, or was he just blagging?

But I'm not lying about it or making things up... so I think it's ok to share this with my readers. And if he does indeed believe he's not doing anything wrong, then exposing this should be no problem, right? Afterall, he wanted to write about this in the first place... so here it is.. raw and unedited. 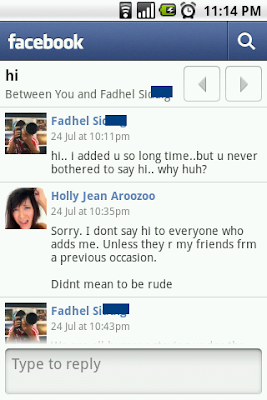 He thinks I was obligated to message him, simply because he added me on Facebook. And then when I told him politely that I didn't send a hello message to everyone who added me on FB (you can't expect me to personally msg like 4k ppl right??) .... he went on to accuse me of being proud (???). 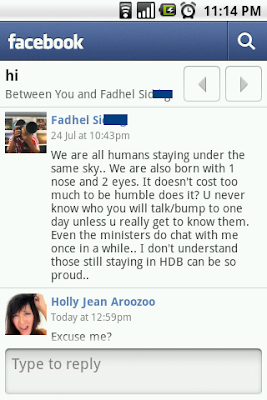 Why bring up the ministers chattng to you once in a while? They do it to win your vote, not because you're so interesting they want to keep chatting with you and be your buddy (in case you didn't realise yet).
And why do you bring up HDB flat?? Should people in HDB flats consider themselves inferior or something??? 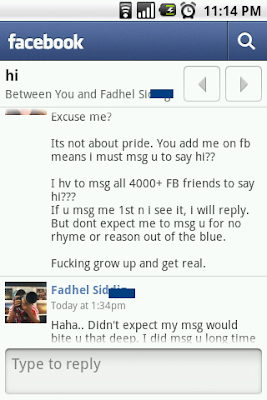 I don't owe him anything. I think he has a real chip on his shoulder, expecting me (or anyone for that matter), to message him just to say hi, and thanks for adding me on FB or something. And because I have no time to do that to 4000 people on FB, it means I am not humble (like his ministers), and plus I live in a HDB flat.. so really, I should kowtow to him and grovel at his feet (??).

So I told him to fucking get real and grow up. Which I still think is very fair. 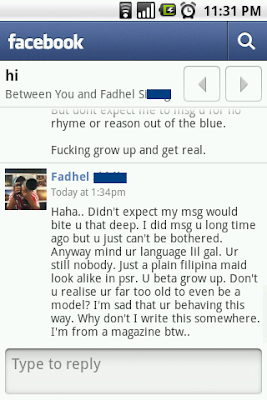 I could possibly have said rude /racist/ prejudicial things (all based on assumptions ) .. for instance- stupid malay boy, or so fuckin ugly ur profile pic must have camera blocking ur face, or only have secondary education, or poor fool living in HDB flat ... (again all assumptions and what a stranger might gather from looking at his FB profile) .... but I didn't. I can't do that. I don't even know him.

He doesn't know me either. But that didn't stop him from making racist and prejudicial remarks.

Filipina Maid look alike ? (what's wrong with filipinos? Why you so racist? And maid somemore? ok la.... btw, in case you didn't notice, I actually like the way I look.)
Too old to even be a model? ( I am certainly not one of those girls who do a few shitty amateur shoots and then when people ask them what is your profession, they say "model". I never said I was a model. I am a blogger. I only accept modelling gigs sometimes because I am paid pretty well for something I find enjoyable and effortless.)

Lil Girl? (hullo?? contradict yourself much?)

And then you say you're from a magazine, "why don't I write this somewhere"... are u threatening me? Well, threats work both ways buddy. I doubt you're from a magazine though... and if you are, I wonder which magazine has employed someone with absolutely no professionalism... try to chat a girl up and when she is obviously not responding the way you desire, you threaten to write about her unfavourably?

"psr"? how do you know where I live? Should I alert anyone? 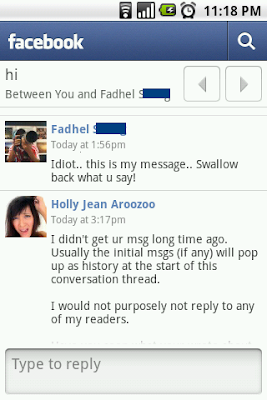 I have no idea why he says "Idiot this is my message swallow back what you say" after his last message about being from a magazine... And this part is really rich. He says HE forgives ME. And then even goes on to say he wanted to cover me for future releases.. but now he shall RECONSIDER. Wtf, he thinks I will start grovelling or what? 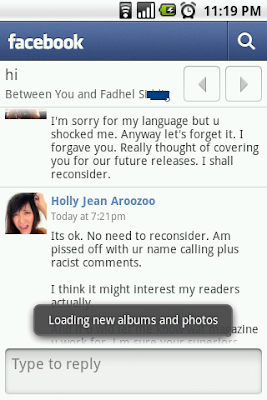 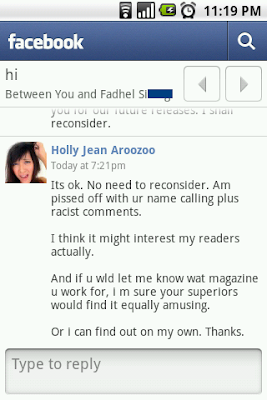 Oh well... That was my bit of bother this week.

Theresa said…
Wow holly, that guy certainly has some issues. No wonder you got really upset abt it! Well, cheer up and delete him from your fb!
11:26 am

Chan JY said…
From a magazine? Big deal. But I think you should have just replied him with a single word "hi" when he complained that you've never said hi to him.

The real magazine people will never approach their subjects this way. This guy is so full of himself, but I have a hunch that he knows a lot more about you than you do about him. Be careful.
11:48 am

Anonymous said…
Oh that's gold! Maybe that's the new way to pick up and impress girls. I guess no one is reading the magazine and he's being pressured into coming up with something so that's what he did. Forgive him too :D
12:15 pm

Crystle said…
Haha oh gosh. Psycho much?! I've met deluded men but this guy takes the cake. I feel so bad for you!
2:05 pm

~Zhenna~ said…
Wahhh babe, am sure you are pretty upset about this.

Checked out his FB profile, seems very normal w/2 mutual friends.. one is you, another is our local famous photographer Mr XXXXX Foo..

Believed he's involved with the photography club/classes so shld be easy to contact him offline and clear up any "misunderstanding"??

Forgive & forget? Yes esp the next mth being holy month.. after all you cant know much abt someone from online blogsphere and sincerely hope things as such can get clarified.
2:05 pm

Anonymous said…
actually holly, think quite alot of your readers know you stay in psr.. it came up in your blog posts before.. do be careful!
2:46 pm

Princess Kayla said…
Ah just forget this bugger la!! he's not worth it!! if u r "proud" then we wouldnt have met up in e first place, since u did not know me in e beginning. and i have friends who commented tt u r friendly and reply emails fast even when u do not know them.

u know for urself what kinda person u are. no need to bother with such numbskulls!!
2:47 pm

Anonymous said…
Why would anyone attack u like that? Holly has been so nice , when i asked her random beauty advices she replied in the next hour can! and why would she not reply a simple hello?? i hate that guy such an ass !
3:24 pm

Anonymous said…
Probably it's Mad Magazine he is working for.
6:20 pm

Holly Jean said…
My dear readers, i cannot approve any comments which mention his full name, link to his FB profile, details of his place of work (turns out its not a magazine btw).

But thank u for letting me know these details... i have read ur comment .. even though i cannot approve n publish them here.
9:25 pm

Anyway, I've been a frequent reader of your blog, and I hope you don't mind me putting in a few suggestions.

I think it would be good for you to invest in a good camera or lighting. Because in some of your shots or videos, it is a little bit hard to see. Like for makeup reviews, with a good camera that can capture macro shots in detail, we will be able to see the texture of the product.

Plus when you do shots of your face with the makeup on we will be able to see the color on your skin.
9:26 pm

Anonymous said…
He is not worth your time.
7:59 am

Anonymous said…
I wished you had published his last name or place of work etc.
you are too nice :)
9:02 am

Anonymous said…
I am grimacing. I think the lack of writing skills on either side is more disturbing than the catty hate going back and forth (from both sides)
10:18 am

Herine said…
The part about he said he forgives u really pisses me off too. I was reminded of a friend who misunderstood me after a small fight and told others that she has forgiven me and is willing to talk to me. it's crap!
3:31 pm

Sarah said…
lol I agree with anon 10:18! I was quite surprised - why bother? Plus imho you kind of over-reacted, sure he was a moron, but it didn't warrant such a childish "retaliation". And yeah, the lack of writing skills also surprised me.

Sorry Holly, I usually agree with you, but this time I was kind of surprised. I didn't think you'd grant these idiot so much of your time and attention - you even blogged about him!
8:43 pm

Anonymous said…
OMG, he like mentally unstable be careful!
9:29 pm

Anonymous said…
There will always be such people wanting to attract that little bit more attention from people like you, who are rather well-known and nice, even though the end result might be negative. As they say, bad publicity IS still publicity after all!

His motive was probably to get you to throw a bitch fit and get all diva-ish so he can write an article on bloggers with a diva attitude.. but do know that the nicer you are to him, and the more calm you are about the situation, the more it will piss him off :)
9:48 am