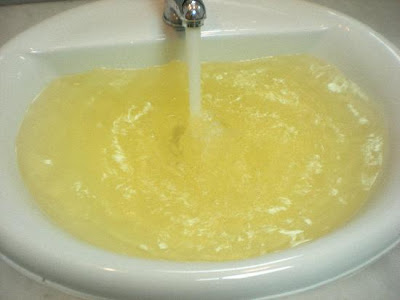 They were told that some "maintenance" work was being done. Then later that day, news broke that a 30 year old Indonesian maid was found dead (and probably rotting.. hence the colour of the tap water) in the water tank.

Imagine.. those poor poor residents drinking, brushing their teeth and cooking... with tap water... in which a maid's dead body was soaking in.... until it finally rotted and made the water yucky looking.

Surely before the water turned yellow, most residents were using it without any suspicion! 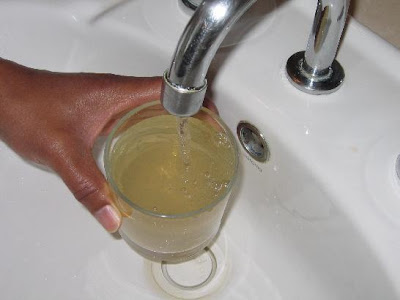 WHY IS IT SO EASY TO GAIN ACCESS TO OUR WATER TANKS, HDB???

If this bangladeshi (it was reported) could gain access to the water tanks on the roof of the HDB blocks... then who else can?

Am I the only one who can see the danger in this? Someone can poison thousands and thousands of people easily at one go, simply by puttng the poison into our water tanks.

Why aren't these tanks locked?! Shouldn't supervisors be in charge of these water tanks, and only open them when maintenance workers work on them/in them. Then lock them up when the work is completed?

Thank goodness this didn't happen at my block ... I drink straight from the tap! *vomit feeling*

I feel sorry for those who were affected.... I would be damn pissed off with PUB/HDB if I were them... maybe they should get their water bills waived for a year or something man.

Anonymous said…
Lol the pics you posted are gross! Anyway it is said that the Bangladeshi was a maintenance worker hence he had access to the water tank.
12:02 am

But i don't think he shld be entrusted with the keys/ access to the tanks anytime. (to the extent he can sneak a dead body in there!)

Some supervisor shld control access. Water tanks are important... it's frighteing to think tht one can simply pay 50 bucks to a bangladeshi worker and he can drop cyanide (or whatever colourless/odourless poison) into the tanks.
12:05 am

Anonymous said…
Wasn't it reported the maid was last heard arguing with the guy around 7am and the water supply stopped at 11am, not much time to rot. Probably just bloody - yes definitely very disgusting but at least not decomposing. And the bangla was a maintenance worker who had access to the tanks, not just anyone who randomly went up and tried his luck.
http://www.straitstimes.com/BreakingNews/Singapore/Story/STIStory_669451.html
12:12 am

ursie said…
OMG I just heard about it today & gosh! I feel so bad & sorry for all the Woodlands residents; they don't deserve this, they really don't.

I feel so angry at the bangla for doing this, I mean really, just because back in his homeland (India, Bangladesh, whatever) they bathe and shit in the same river doesn't mean we do too! I hope his balls get fed to him in hell.
2:35 am

CeLestinA said…
Yes, the body didnt rot. It was discovered within hours after the murder took place & unfortunately some residents were affected during that timing

I'm sure after this saga, tighter rules on the access to the water tank will be imposed

its always the case. only after someting terrible happen then stricter rules are imposed
9:19 am

Anonymous said…
Even if the supervisors have the keys... I doubt they can be around to 'inspect' the workers all the time? It happened in the morning, so perhaps the supervisors weren't even at work yet! Lol
11:17 am

Kuen said…
And right after it was reported, there were salesman going there to sell water filter lol
5:25 pm

Holly Jean said…
Yup. When did I say tht pic was woodlands tap water? I don't live in woodlands blk 686...

I googled for dirty tap water for those images.

We use images for illustration to go with articles. Don't be so naive lah.
6:38 pm

Time to question the buildings managers and your newly elected officials.

The water supply should be secure, and something like this should never occur.

If getting access to part of the public water supply is this easy, a terrorist or malcontent could easily poison any buildings water tank.

Anonymous said…
Today's ST reported that a dead body was found in the water tank in some apartment in johor... In this case the tap water was bloody n had a foul smell... yuuuukkkk! apparently the lady FELL inside thru the roof of the water tank room! No keys needed!
9:34 pm

Holly Jean said…
@david- actually, the matter has already blown over... no more news about it. Our authorities are top notch when it comes to covering up. :)

Anonymous said…
you are very misleading in your post with a borrowed pic form tripadvisor. whats your intention?
3:24 pm

Sharon said…
Why do you approve all comments HJ? Even the dumb ones?!

Anonymous... she did not say the water pic was from woodlands. All bloggers and online media use images to go with their articles.

If she had chosen to put a picture of an indonesian maid cleaning. Then are you going to accuse her of misleading us to think that THAT was the maid that was killed?

So, this one also... means the water is from woodlands water tank arh?? http://www.over-logging.com/2011/05/hidden-corpse-inside-water-tank.html
7:43 pm