Have You Caught Golf Fashion Fever?!

on February 23, 2011
The HSBC Women's Champions 2011 was kicked off yesterday with an all star appearance. American stars Michelle Wie and Paula Creamer pose in Korean and Japanese costumes with Asian stars Jiyai Shin, world number one Yani Tseng and Ai Miyazato. 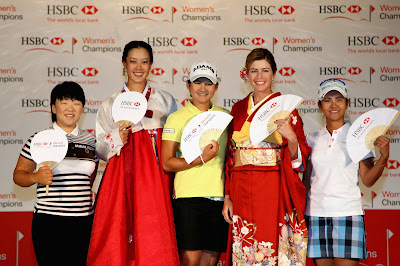 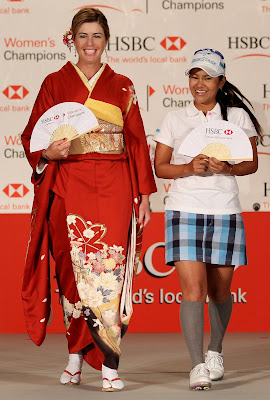 Yani Tseng said: “The LPGA is such a global organisation and we need to showcase our international talent all over the world. We are all proud of where we are from. The Taiwanese and Chinese cultures, and Korea and Japan too, they’re all so rich and this is such a nice opportunity to see just how diverse the LPGA Tour is."
.
The HSBC Women’s Champions 2011 will see 63 of the world’s top female golfers, including all of the 2010 major champions and all of last year’s LPGA tournament winners, battle it out over 72 holes of individual stroke play. The tournament is sanctioned by the Ladies Professional Golf Association (LPGA) and will offer a purse of US$1.4 million. The tournament takes place from 24 to 27 February 2011 at the Tanah Merah Country Club’s Garden Course.
.
Can't wait! I'll be there with my cousin who's visiting from Perth. Have you got tickets yet? :)

Golf fashion said…
They're cute. I don't think the sponsors want to take too many risks when it comes to deciding what players will wear. They play it safe because the world at large sees golf as a conservative sport played by conservative people.

Personally, I think things like that can hamper the development of the sport. There's no reason why a golfer can't wear more attractive styles and colors and still play well.

Unknown said…
Golf apparel are a staple in any man's wardrobe. They are versatile and light, and can be dressed up or down according to the occasion. When forming your own wardrobe, make sure to include a variety of styles and colors of polos. Not only can you wear them alone, but you can also layer them to give your look more dimension.
http://www.apparelnbags.com/store/golf-apparel.htm