Dumb As A Box Of Rocks 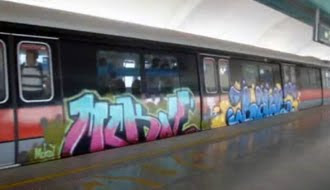 Ok.. I know this is a bit late, I've been busy (!) but I just want to share my opinions on this Graffiti case.
.
People have been going on and on about the breach in security and the fact that the vandalised MRT train plied our tracks for 2 days before staff reported the misdemeanour. They said that they had initially thought it was an ad campaign.
Singaporeans are crying bullshit. But just for the record, I believe them. The ads on trains, busses, walls, FLOORS, etc now are getting more and more in your face and out of the ordinary. Plus only a few months ago, Singapore post boxes had graffiti sprayed on them.... just to create a stir, but that was some campaign, not vandalism. (wasn't it?) So yeah, I believe the SMRT staff did not report it ealier because thay had cause to think it was part of the programme.
What is inexcusable though is the security lax at the Changi Depot. A bit of barbwire and a few cameras could not stop 2 men from prancing around the depot like two pre-pubescent boys, in the middle of the night, making their mark with a bit of paint.
.
I bet if the Jemiyah Islamiyah knew a couple of years ago how easy it was to just get into Changi depot to plant bombs on every train... they wouldn't have wasted their effort standing around outside Yishun MRT, conspicuously filming and acting dodgy for so many weeks until they got caught by our internal security guys ( or whoever).
Well... I'm sure many SMRT people's heads are already on the chopping block... and a big show will be made about how SMRT is stepping up on security and public confidence on this sunny island will once again be restored.
But what I don't understand is how THIS GUY--> 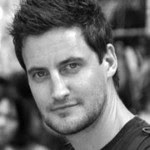 , Oliver Fricker, thought that it would be a good idea to do such a thing... in Singapore (!).
.
His smarter (albeit only slightly smarter... as it's only a matter of time before he's caught and flogged) accomplice, British citizen Lloyd Dane Alexander ran off to Hong Kong.
.
Oliver Fricker, 32, a business consultant working in Singapore, was charged in court with trespassing and vandalism. He's freaking hot looking ( what?? Tell me you wouldn't cast him on Twilight or something??!), has a job as a business consultant.... Who in their right mind is going to employ a business consultant who gets his kicks from vandalism?! He's not a teenager, he's thirty freaking two.
.
I'm imagining a scenario where we're dating here... and then he says.. " erm, baby, I can't do dinner tonight... I have something more important to attend to"... and then him and his pastey white friend ( I am assuming the Englishman is pastey white looking because I read that he only just got to Singapore a month ago) crawl up to an MRT train and spray it. WTF?
.
I'm sorry... but I just think this Fricker guy is as dumb as a box of rocks.
.
An act of vandalism is punishable by 3 to 8 strokes of the cane, a prison sentence of up to three years and a fine of 2,000 Singapore dollars. Fricker is now out on bail for $100K.
.
Also read my thoughts on whether Ficker should be Caned? In my post titled- Flog The Fricker! (which I think is a very clever title with a play on the word Fucker. *own trumpet being blown*)
.
(before you lash out at me, read the damn thing first ok..)

Anonymous said…
In before the 'look who's dumb as rocks now' comments. It's Jemaah Islamiyah not Jemiyah Islamiyah
8:06 pm

Anonymous said…
wow holly.. I really liked your flog the fricker post. It's refreshing to see things from your point of view.. and as always, you write with attitude! Had me in stitches!
11:57 pm

Anonymous said…
whatever it is, this Ficker fella obviously knew what he was doing. I think it's ridiculous why the authorities never bothered to sit down and actually ask why he did what he did.

I don't know about you, but I just can't help but think we're doing this for our own insecure ego as a state; like a scrawny nerd with straight A’s in the locker room full of big, buff manly jocks.

it just screams of insecurity when compared to others in the global arena. and whatever happens to Ficker, I think he wins. if he's caned, we'll just continue making ourselves look continue looking petty, if he walks free he's literally giving our trigger-happy authorities the finger.
5:22 am