on May 11, 2010
Was invited to the preview of Robin Hood yesterday at Iluma Bugis. 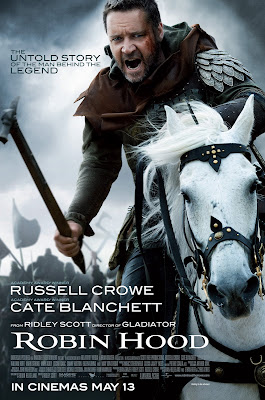 Is it just me? Or when you see a picture of Russell Crowe as Robin Hood, he still looks more like a Gladiator than Robin Hood? Maybe it's the haircut.
I always envisioned Robin Hood to be someone not quite so stubbly faced, wrapped in green tights, has more refined looking hands which make him adept with the bow & arrow, and definitely someone who can ride a horse with his mouth shut.
OK... so we all know that Russell Crowe was never on my hot older man list. But boy have I changed my mind! He's actually quite a hot Robin Hood. ( Lady Marion kicks ass too... kudos to Cate Blanchette)
In Ridley Scotts' Robin Hood, Russell Crowe (yes, Robin Hood) starts off in the army of the
English King; Richard the Lionheart and then heads back to England after Richard the Lionheart dies in France. On his way back, he and his friends ( including Little John, etc) chance upon the English knights who have been ambushed and killed enroute to bringing the late King's crown back to England. Robin Hood makes a promises to one of the dying knights, to return his sword to his father, Walter Loxley in Nottingham.
He travels to Nottingham to deliver a sword to the knight's father and falls in love with the knight's wife, Lady Marion (Cate Blanchett) who is now a widow. Bit of romance in the middle of the movie ( don't worry, very tasteful, even though Cate is a white as a ghost, I promise you it won't make you cringe). And Robin the hero and his friends also end up defending Nottingham againsts thugs.
Then there's British nobel turned traitor, Godfrey, who leads a french army invasion... a stupid and cocky new King (Lionheart's younger brother... whose name I don't remember... but looks more like a greasy Italian football player than an English King to me) ... friar Tuck makes good booze out of honey and Robin Hood (with the help of Marshall, former advisor of the King) unites all of England and leads an army to help fight the invaders.
This movie will also tell you who Robin Hood's father is... but I won't ruin the surprise.
I give this movie an 8 out of 10. Not that my ratings carry any weight... but it has some really awesome fight scenes... and the storyline is engaging.... plus there are some beautiful scenes.
This movie has given me a new favourite quote:
Rise and Rise Again Until Lambs Become Lions
Out in Cinemas on May 13!!! Go catch it!
My outfit for the evening was from Urbanalised. Very sweet floral cream chiffon tube with a lace up denim bust. It's also available in dark blue floral. 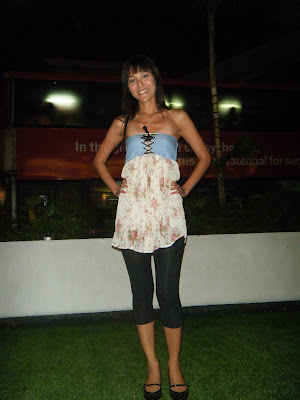 Thank you omy.sg for the invite! Thank you Andy for making the effort to rush down straight after work to watch this with me. Much appreciated.

Watch Robin Hood Movie said…
Robin Hood movie brings back the tandem of Crowe and Scott. I do really like this movie. :)
Good luck.
1:13 pm