on December 11, 2009
What do you make of the current Tiger Woods Scandal? How many mistresses have surfaced now??? 13? 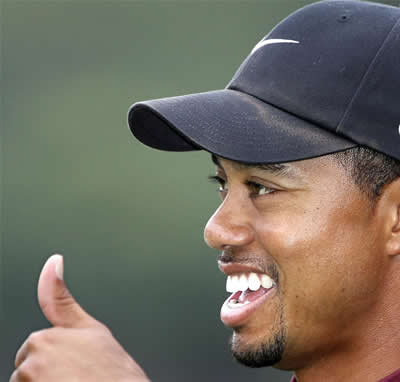 I've been thinking... There are men out there who do not cheat on their partners/wives. But there are plenty of men who do. Especially men who are public figures... celebrities and politicians.
I just don't understand it... when you live in a fishbowl, everyone can see you. There's no such thing as being discreet. Why risk everything and cheat??

Worse still... Tiger has a "wholesome talented young sportsman and married with kids" Image to live up to. Plus his wife is gorgeous... looks wise, she's in a much higher league than he's in. Monkey Face. (see end of post) 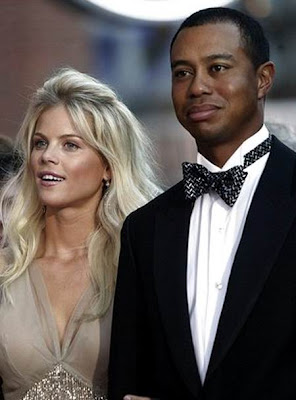 Our world is so open... there are opportunities to download photos of extra-marital affairs, review videos of sex scandals, listen in to recorded conversations, read text messages/emails between clandestine lovers, evidence of mistress’s dress with his DNA traces. Technology has given us (the public) an appetite for scandal! Which makes it all the more beguiling why men who are famous tempt fate by cheating on their wives. But they do. Despite living in a fish bowl!

But I have 3 main questions about this:

1. Are public figures especially vulnerable to cheating because they're in the limelight all the time, so women throw themselves at these men? Thus making it humanly impossible for them to resist it when sex is dangled in front of them everywhere they go?

2. Is there something about fame and power that makes one feel entitled to be free and not tied down with 'rules' like normal mortals?

3. Is there something about the personality type that commands fame or power that also makes one likely to cheat?

I think most men (and women too) seek novelty and variety when it comes to sex.

Attracting women is probably one of the most significant ways through which men are able to validate their masculinity and sense of self worth. For some men this stage of life is short, and by their early 30’s they snap out of it, while other men just remain non-committal and non-monogamous for as long as their cocks will stand. Thus, no matter how wonderful their girlfriend or wife is going to be, they will not stop pursuing new interactions with women and new sexual experiences.

You would think that the fear of disease, public humiliation, hurting your wife, damaging your children, and undermining your life’s achievements would be a deterrent to men who cheat. But I guess it's not!

With regards to saying "Monkey Face" when talking about Tiger looking unattractive to me.... it was not meant as a Racist remark or insinuating that African American/Ethnic/ coloured people look like apes. If he looked like a weasel, I would have said Weasel Face. But I find that resembles a monkey ( not a weasel or dolphin or turd), hence the term monkey face. Nothing to do with his ethnicity or race. 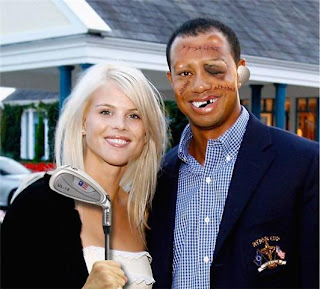 Brenda B said…
Erm, my thoughts? All men/most men or women (as a matter of fact) cheats sometime in their life. I'd like to believe otherwise but still, numbers and stats don't lie. The thing is, public figure are 'caught' cheating because they're 'out there', whereas a nobody, it remains a nobody/silence. I don't really know ay Holly Jean, relationship and all these, complicated stuff. I don't understand neither.
6:37 pm

Anonymous said…
I've been your reader for quite some time, but I'm very disappointed with you new entry. It shows you are a narrow-minded person.
11:38 am

Anonymous said…
Agree with anon 11:38 - this is a tiresome post, just another HJ rant against men.

Anonymous said…
People are so PC these days!

I think Tiger Woods is an embarrassment to his family. If he were a woman, there would be much more outrage. His wife is more good looking than the plastic women he slept with. I feel so sorry for his family, imagine the humiliation. Looks like he has no self control. I don't blame the other women, they have nothing to lose. Who wouldn't jump at the chance to get the chance to be Mrs Tiger Woods? Not saying what they did is right..but in this case, the blame is concentrated on Tiger Woods.
5:35 pm

Anonymous said…
i dont think HJ is narrow minded in this post. Why can't she question it all? Sad truth is ppl are perceiving infidelity to lean towards the norm and soon deemed to be acceptable.

HJ ranting against men? Nothing wrong with it. This is a current hot news and its gd she keeps in tune with what's selling like hot pie now.

I was disappointed opinions from public pouring in saying to leave him alone, he s only human. Its a trend now to excuse one's grave mistake as being human? How pathetic and what a downright insult to our creator.
1:58 pm

Anonymous said…
whats wrong with monkey face though i dont see any resemblance. In fact not to be crude he looks more like monkey's ass face.

The rather stark crude term used to my opinion in this usually intellectual and classy blog, is cock. Maybe its me, i ll be the first to admit. Cock just sounds so rough and crude - something i dont relate to hj's blog style.

'Cock' seems to be a favourite choice word of this sex maniac blogger Yu Kym but that's just her style - rough, vulgar and sex minded.