on December 21, 2009
As most of you already know, I live in Pasir ris. I've blogged about my neighbourhood I grew up in.

But about 5 nights ago, (on my way back from Mark's), I noticed some red stains on the walls outside my neighbour's flat. It's like they spilled some paint and tried to clean it off, but it still left a faint mark on the beige walls.

The next morning, I was shocked to see fresh red paint on their walls and door! And the wife was trying to clean it off... but it was really such a big splash of red enamel paint that it seemed inpossible to get rid of. I felt bad and embarrassed for her, so I pretended not to notice and didn't ask prying questions. But it was pretty obvious it was the work of loansharks. 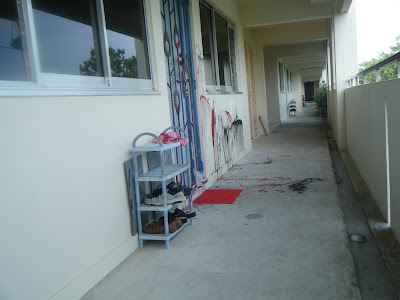 And then.. THAT DAY ITSELF.. surprise surprise, the whole family packed everything onto a lorry and moved out! First I'm wondering... bloody hell.... exactly how much money do they owe these loansharks to the point that they (husband, wife, aged parents, and 2 young kids) have to move out of their home pretty much over night?! 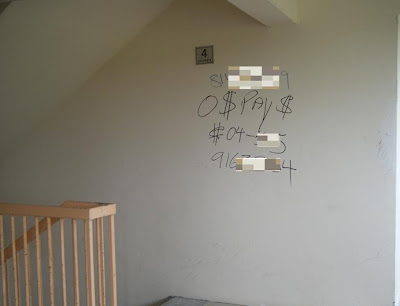 The family no longer lives there. The police have already come by. But the terror continues. Now the loansharks have changed to Black Paint. Our corridors are starting to look like the works of Picasso. 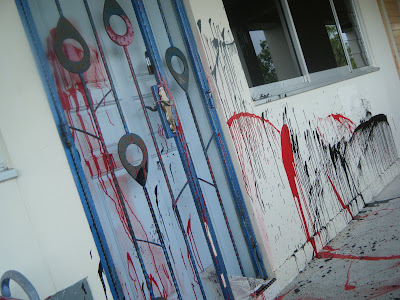 And every night, I've been coming home (around midnight), and my heart skips a beat everytime the lift door opens. Afraid that I might bump into them while they're there to collect the debt or paint the walls Fushia or something.
The other neighbour told my mom that the man living there told him that it wasn't him that borrowed money. Apparently, he lost his NRIC card a few weeks ago, and then someone used his NRIC card to borrow money from a loanshark. So it's like not his debt... and yet he's moved out of his own home when he did nothing wrong (?) ... hmmm.... I don't know..... do loansharks just part with big sums of cash simply because you give them ANY identity card as collateral?? After being in this business for decades, they're not THAT stupid right?
Me thinks the neighbours told a lie to save face.

Anonymous said…
Vivian, don't be so niaive. Or were you actually born yesterday?
1:40 pm

Ffanie said…
My good friend misplaced his I/C at a LAN shop a few weeks ago. Someone actually did use his I/C to borrow money from the loansharks. How did my good friend know? Because the loansharks threw red paint on his NEIGHBOUR'S door, and wrote the O$P$ along w my neighbour's door number.

So my friend called the loanshark (how weird) and explained that he thinks someone used his I/C to borrow money. Surprisingly enough, the loanshark "teamed up" w my friend to try to nab the bugger - one of the guys working at the LAN shop. Yeah, the police got involved too.

So, it IS possible.

@anon: there are so much more things out there that you don't know about.
1:48 pm

Ffanie said…
*along with my good friend's door number
1:49 pm

Anonymous said…
oh.. u mean the number they wrote on the wall is the loan shark HP no and not the HP no of the person who owes $ ?
2:28 pm

Anonymous said…
wow an eye opener. i thought loan sharks nowawdays would have "upgraded" their ways and not use red paint and cliched words like "owe $ pay $". sorry i live overseas so maybe loansharks still operate this way. hahha^^
2:30 pm

Btw back in Sg, my neighbour used to borrow frm the loansharks too. I recalled being @ work when mom called me saying our neighbour's door was tainted with paints and all the O$P$ (is there some ah long foundation that came up with that abbreviation? Quite catchy i must say lol) signs that usually comes with it. I was angry @ that time cos I was worried for mom's safety as she's aged and usually at home alone.
2:34 pm

Holly Jean said…
nope. We've got back together for a month now. but taking it slow. :)

I'm actually surprised by the number of ppl who have responded to say tht their houses/neighbours/friends houses were splashed as well, even though they were not the ones who owe $.

Better hang on tight to your IC cards man!

-- someone emailed to tell me tht in hougang, one neighbour kept getting harrassed by loan sharks but didnt pay back. after a month, the loan sharks splashed all his neighbours! LIke all 8 houses down the corridor got splashed with paint!

Nippon and Dulux must be happy. good business.
2:48 pm

Anonymous said…
im glad ya handling it well HJ. Its very wise indeed not to rush things esp at a vulnerable stage. Ive learnt something over the years - rships need not and shouldn't be so stressful and tiring.
3:28 pm

I have been living in Bedok (5 room executive flat) for the past 10 over years and recently the loanshark runners have come to splash paint on the walls. The ironic thing is it's my Indian neighbour who owes the loanshark, but the runers have splashed paint on the innocent houses (2 of my neighbours who didnt owe money). This tactic is a smart move because the innocent neighbours will then approach and scold the Indian neighbour who borrowed the $. This will help to pressurise and fasten the process of neighbour' repayment process, i hope.

Steffanie said…
Yeah, the loansharks put THEIR number down. But obviously, the number's one of the underling's, I guess.

And the motive of splashing paint on the neighbour's is to ... embarrass the person who borrowed the money.

Anonymous said…
Actually it really could be your neighbour's beem telling the truth. This is a first hand experience. My father's 'friend' supposedly used his ic to borrow a sum of cash. The experience is truly horrifying as we have to clean off the paint using thinner which really reeks. There is also stress that they may come back and we have to repeat the whole process again which may be why your neighbour just up and went away. Luckily our neighbours have been pretty understanding and since my conscience is clear. I don't really feel much of the embarrassment.
2:43 am

Anonymous said…
It is possible that ur neighbour had lost his IC and someone got hold of it and borrowed money from loan sharks...

my friend lost his ic at a lan shop too...and to date, he had suffered 2 different loan shark attacks..apparently..he spoke to both loan sharks operator..and they concluded that he was not the one that borrowed the money...and had left him free from harassment since...
10:20 am

they are called loansharks for a reason. they don't run a legitimate business. what makes you think they bother to run proper checks on who they loan their money to?

let's just say they don't run banks or pawn shops. i'm sure without the ICs, they have underhanded means of locating the person whom they loaned money to. how big is singapore anyway?

in any case, if loansharks splash paint or scratched the car doors of the wrong guy, i doubt they would feel apologetic or sorry about it.

the truth is, there are a lot of mistaken identities out there.

why would the police see the need to run a campaign on vandalism by loansharks?

why would we see news articles about innocent people telling the public their homes got splashed with paint? these loansharks who don't give a damn, even though their victims reason with them. would someone who have borrowed money from loansharks volunteer to appear on newspapers and shame themselves?

HJ, if i were your neighbour, and i was a victim of mistaken identity, i would move out too, for the fear of my own safety about what these ruthless dudes would do.
2:57 am

Anonymous said…
Lost NRIC again?!?! Come on, this reason has been used far too many times. About a month ago, loansharks splashed black paint on our door. Good thing they wrote the address of our neighbour who owned the $ or neighbours might think we're the ones... Reason given by neighbour was also his (adult) son lost his NRIC. Oh, and this son of his loves to play mahjong overnight so I won't be surprised if he gambled away his money and borrowed from loansharks. I've already asked my dad to get them to clean our door and gate the next time it happens. These people make me so mad. I wouldn't want to be locked up in my own house should the loansharks decide to chain our gate or something!
10:04 pm

check with you, are your neighbours back in their own house already and does the splashing still continue?

Holly Jean said…
neighbours are not back. house is empty.


no more splashing. the HDB or town coucil ppl came to paint over the Art on the beige walls. But the floor and door and grills still have paint.
8:22 pm

Anyway, usually they'll write the name of the borrower, so of course my parents called them up to clarify and also threatened them. Hahaha quite a funny experience. We never heard from them again.
8:54 pm

Anonymous said…
back when i was serving NS, a few of my frens lost their 11b (at the same time) and a wk ltr, their houses got harassed by loan sharks!
10:08 pm

Anonymous said…
I got a sms last night from a loan shark claiming I owed him money. I was shocked and called him back to clarify it was a mistaken identity. Guy name Eric gave me my name and ic no which I was shocked. How can anyone use or do such things. I never loose my ic and it was in tact with me. I was so shocked made a police report. The guy used vulgarity on me and threatened he is going to burn my house down.

This is terrible for loan sharks to find and threaten harmless people.
10:38 am