Would I Have Been So Lucky? 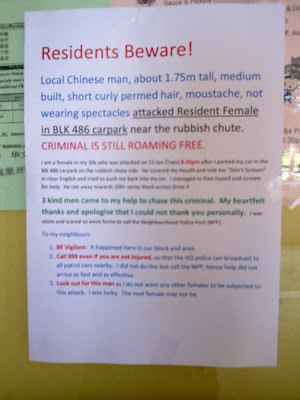 Yesterday, notices warning women to beware of an attacker on the loose went up around the neighbourhood.

Apparently, this woman was coming out of her car (at my carpark) when a man grabbed her, covered her mouth and told her in clear english- "Don't scream". He pushed her back into her car. She managed to struggle and scream for help.

Three men came to her aid and gave chase but the culprit had fled. The police are on the look out for him.

I walk through this same dimly lit car park at least 3 times a week late at night. Either I'm on my way home from a night out, or on my way back from hanging out at a girlfriend's place a few blocks away.

Last night, I kept Mark on the phone with me until I reached home. It's alarming that such a thing could happen practically in my own backyard.

Here are some useful self defence tips for women ( or any victim of an attack)
[Taken from defendu.com and

1. Stay aware of people in your surroundings.
Pay attention! Who is looking at you? Has the same person or car passed by you twice? Does someone appear to be moving with you?

2. Stay with people or go to people.
Do not ever let yourself be taken somewhere. Cops call it the "secondary crime scene" and most of the time it will be where your worst nightmare resides. If you are approached in a public place do not get in a vehicle with him. Do not walk around the building to the secluded alley -- STAY where others can see you.

3. Keep a barrier between you and the bad guy.
Use a barrier to block him or use distance to gain time. Keep your doors locked. Stay in your car. Force him to get through a barrier before he can get to you. The more difficult you make it, the more time it takes him and that means he might be discovered.

4. Attract attention.
The first thing he will say to you is "don't scream or I'll kill you". Create a disturbance, scream, throw things, blow the horn. You can't count on others coming to your aid, but you want to appeal to his fear of getting caught and make him think that someone could hear you and be coming.

5. Use your strongest weapons against his weakest targets.
His weakest targets are his eyes, throat, groin and knees. Strong weapons that you can employ are your kicks using the bottom of your feet, your elbows, hammerfists and palm heel strikes.
In the event of the worst outcome use your fingernails to gouge your attacker's cheek. It marks him for identification and you will have DNA under your nails.

Anonymous said…
Well, could offer to teach you karate or something... :D
1:52 pm

Annoymous said…
Yes and no. Life is so unpredictable.
But it'll be best to come home early.
1:55 pm

Anonymous said…
Hi Holly, here's a tip for when walking at night in dark areas eg; carparks, carry your keys (car/house) in your hand with biggest one between forefinger and big finger with thumb behind it, aim for the neck or under the jaw. Most attacks from behind are around the neck, grab the arm and sit into the attacker, it will give you space, go for the squirrel grip and get the hell out of there. One of my former students use the first one and she was happy that I had taught it. It's a fight or flight thing and I say fight! Just my 2 cents worth.
4:31 pm

Anonymous said…
farkk damn freaky ahhh!!! i do stand by my keys though. and the stupid guy has permed hair?? yeeshhh

Anonymous said…
yup.the keys between your fingers is a good self defense trick. clench your fist with the keys in between then punch as hard as u can. shahril taught me that. remember him? and the trick is, he said, to aim at the throat.

another one, he said, is to punch hard at his chest. This will leave him temporarily stunned as he gasps for air.
1:22 am

Anonymous said…
lol. i guess Singapore is too safe that make ppl like pets and puppies.
5:58 am

Kris said…
in texas we have conceal and carry laws,

i would just pull out my 38

Cool! You're so cool!

Wow, I'm so impressed that guns are such a common part of ordinary American life.
3:00 am

Kris said…
i sense some hostility or is it plain cynicism?

I guess some people are just anti-arms, but don't fuss to much about it if it's an anonymous comment...

it is rather informative (:
pinch the inner muscles at the area between the shoulders and elbows. really hard.
11:11 pm