on December 06, 2008
I've touched on the topic of infidelity and cheating many times before.

But recently, Mark and I had an interesting discussion on the topic of infidelity. People always talk about men and cheating ... even though it's just as common for women to cheat.

It's widely believed that men are wired to cheat. And the scientific explanation for that is simply - Evolution. 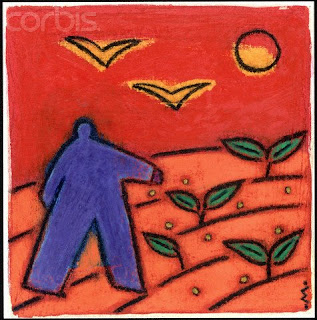 For men, the aim of evolution is to get as many babies born as possible (sowing his seeds.. ensuring continuity of his genes). Thus, for an evolutionary advantage, the more babies a male has, the more his genes will spread. Given that many men are still apes today, they are prone to straying.

- Absence
Many men spend a great deal of time at work, and away from the family. This absence can create a void.

Even women who spend a lot of time at work, and are absent from their spouse, might easily get too attached to a male colleague who's always there. I have married friends who have had affairs with colleagues. It's so common.. because we spend such a great deal amount of time at work.

- Evolution
If men can cook up evolutionary theories as excuses for their infidelity, then so can women!

It's a survival instinct for women too. Early man lead harsh lives, didn't live long and were prone to diseases. So for women, having more than one husband/lover/mate makes sense because the man could die. Don't put all your eggs in one basket type mentality.

- Science
Polygamy is a gene mixer. And genetic diversity breeds stronger off springs.

-Ability
Womencheat... quite simply because they can. Women are no longer dependant on men, they see themselves as equals, and can fill a man's shoes.

My previous posts on Cheating and Adultery:

-Allow Me To Save You From Infidelity

-The Grass Is Always Greener

-Cheating Husbands And The Other Woman

william said…
lol, call me bias or wat so ever but men doesn't cheat just 2 have more babies...

don't always judge a book by its cover. nowadays women are stil fighting for equilibrium in our society but some area have granted that to the women. Nowadays not just men spent all their time in work, women with a career minded aim also do so. When a man feels lonely or lack of care, they tend 2 seek for that caring moment...

Anonymous said…
It's been awhile since I last drop in.

Interesting thing here. Shall not comment on it. :D

Anonymous said…
im a man and its engrave in my DNA to reproduce as much as i can. nevertheless civilization, new morale standards have put a guideline into selective reproduction.and woman invented marriage as the masterpiece to put everything together. men then created pre nuptial as a counter measure.
1:18 am

William... I don't think she meant literally make babies! More like hardwired in men's brains to have sex, as in the past they used to have to conquer more women in order to procreate.
1:19 am

Anonymous said…
haha.. KingKong.. you made me laugh when u said "woman invented marriage as the masterpiece"

Anonymous said…
Have you ever cheated?
1:32 am

Spank-A-Lot said…
I am of the opinion that humans, regardless of whether male or female, are prone to cheat.

The reasons may vary but cheating on one's spouse is not dependent on whether they are male or female.

Though alot of times, males tend to stray much more than females...sad but true.
3:05 pm

Anonymous said…
There is another excuse to cheat - "Escape!". It's an attempt (a cowardly one, no doubt) to run away from a difficult/abusive/manipulative/whatever partner. Walking out openly takes is too draining because of the confrontations, so we cheat behind their backs.
Cheers.
9:05 am