Foreplay: Why Your Woman Doesn't Want It

on November 29, 2008
Just read a newspaper article which cites a study that said foreplay adds little to a woman's enjoyment of sex. According to the researchers, the main event itself is far more important to women.


This study contradicts what women's (and now Men's) magazines have been advocating for years! Flip through a magazine, and you're bound to find articles on How to Turn Her On, Find Her Erogenous Zones, How to Make Your Woman Gag For Sex... all of which tell a man to take it slow and build up...


The study concludes that "foreplay contributed little to a woman's enjoyment of the encounter". (Who are these women?!!)


Is it true?? Is foreplay overrated?
Or was this article just written by a man?


Based on my experience (and from talking to other women).... men often regard foreplay as a chore.


I think that the only reason a woman would encourage her man to skip foreplay would be because he's not good at it. Jabbing a tongue around, or wiggling a bunch of clumsy cold sweaty fingers down south does not a happy woman make. 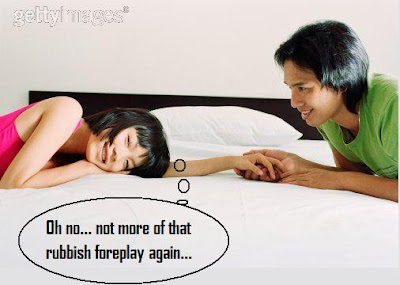 So if your woman tells you she doesn't need or want foreplay... I'd put my money on the fact that you stink at it in the first place... so she just wants to get everything over and done with. Trust me... if you were a great cunninglinguist, foreplay would not be refused or hastened... we women aren't really that selfless!

What do you girls think? Do you like foreplay? If not.. why not (really)?

Next post will be on foreplay and how to hopefully do it right. :)