Sex For Money Vs. Sex For Free

on October 24, 2008
Okay now... the catalyst to this post on paying for sex is this quote I came across a few days ago-

"The Big Difference Between Sex For Money and Sex For Free, is that sex for money usually costs less!" (Irish playwright Brendan Behan) 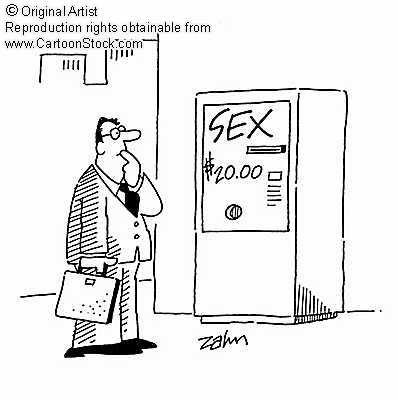 And you know what? I think it's quite true indeed!

One of my guy friends was telling me about why he stopped seeing this girl he was dating. Apparently, after a couple weeks of dating, he took her on a weekend holiday in Thailand. And she still did not sleep with him. He was expecting that if she accepted the holiday, then sex was on the cards for him.

Later on, when I dated the My Mighty Disappearing Man, we were having a conversation when the topic of sex came up. And I slipped him the question- Have you ever paid for sex?. (This is important because I could never date someone who has ever resorted to prostitution).

And then he surprised me with his answer...- ALL MEN PAY FOR SEX, one way or another. Before you get a girl in bed, you'll have to take her out to dinner etc, and all that costs money.


When I look at my own dating habits... I realise that on the first date, if I like the person and I know that it's going to go further (meaning doesn't end at just one date), I let him foot the bill.

But you know how sometimes you're out on a first date, and you kinda know that this is not the person for you...?? Well, when I get THAT feeling, I always scramble to pay for the meal when the bill comes. I guess subconsciously, I don't want to be indebted, or feel obligated since I know he's not going to get anything from me ........ (I meant a second date!). [Girls.. I cannot stress this enough. Sleeping (or making out) with a man on the first date is just POOR FORM! No matter how attracted you are to him. NO! DON'T !]

So... do you agree? All men pay for sex indirectly? All those men who meet women at the club, on the train, at church (!), online or wherever ... they still end up paying for it.

Which brings me now to another question. If paying for the date is paying for sex... Then don't women pay for sex too?

We spend money on nice clothes, pay for brazilian waxes, get sexy underwear, pay for the pill.... all that... I'm pretty sure women out there are not doing these things to make themselves unfuckable.

------------------
I am hoping though that the man i end up with isn't splurging on dates because he just wants to get laid... rather he's dating me because he enjoys time spent with me, and wants to develop a meaningful relationship.

Spank-A-Lot said…
Now I must say that puts things in perspective. I guess it sadly proves true the saying that "Nothing's free in this world". Not even something as sacred as sex I suppose.
11:25 am

Anonymous said…
Actually, it's true. Either way will need money. But the difference is direct or indirect paying for sex. But one thing I'm sure is, indirect paying stands way lower chances of having sex compare to direct pay.
12:30 pm

Anonymous said…
Why sex? Why can't it be other things in relationships?

I guess all of us will face challenges in our sexuality as a human (male/female) and also relationships. I believe if we need the grace & love to guide us in our life important relationships.

Anonymous said…
for me, i will be really sad that I have no chance to spend my money on women. the fun of dating is not all about sex. I would say i like to spend money on the girl i sleep with, but if you call this "pay for sex", then I won't feel great about this sex. and by the way, i will totally pay more if the girl is brazilian waxed. lol!
2:37 pm

Anonymous said…
and holly, nothing wrong to have sex on the 1st date. sometimes, ppl just need to follow their natural feelings. and the sex usually really GREAT! haha! you should try sometimes!
2:39 pm

yes nothing wrong with sex on the first date. :)

But I have heard ppl say tht if the guy REALLY likes you, he won't try to sleep with you on the first date. haha..

anyway, what i do belive in though.. is delayed gratification. I love it! LIke it makes u really yearn for it.. so when u finally do end up in bed.. all tht pent up energy and passion gives rise to a pretty good time... :)


--------
I must say.. I am encouraged to see a few new people commenting in here :) (different IP addresses from previous posts' comments). I welcome everyone! :)

Anonymous said…
Hi HollyJean this is interesting sharing. I believe it will be much better to save up sex for the love one we will meet and marry. I guess we will spend more time out of the bed then in bed with our future love one... so it is better to invest in what that is done out of the bed. ;)

Anyway money is useful but it is just a “thing” that we use to help us. Sex (from my view as a single guy) it is a gift and is something very sacred so lets focus & invest on the relationships that are important to us. Just sharing with you what I have experience in a Choice weekend (http://www.choice.org.sg/) I attended.

Anonymous said…
OMG, just wanna say that i read the Mighty Disappearing Man Post and I was like, WTF! Cuz yes, it happened to me too, and it had never happened before and I was APPALLED.

It was if anything, utterly MYSTIFYING.

I should stop with the CAPS, but THAT WAS HOW I FELT.

They're usually good-looking (either that or really charismatic). So what happens is that they see us getting serious, and they start freaking. Why? Cuz they don't want to commit - they're always on the lookout for something better - or so they think.

What happens to these guys? They get too embarrassed to call us back, so they don't. They move on, we move on - and then one day, they wake up and realise, hey, I'm starting to bald and am all ALONE. And that's when they settle on the next UNSUSPECTING VICTIM who comes along.

Ooh i realize that this is a reply to an issue from another post, but i just felt COMPELLED to share this insight.

Holly Jean said…
DEE... Thank you for sharing stuff regarding your disappearing man and you theory of such men. :) much appreciated.. and SOOOOOO true!

:) Haha.. I loved how u typed in CAPS.. because I totally felt the SAME.. I had to stop myself from doing that whole post in caps :)

Anonymous said…
women label men as assholes all the time but they fail to realize that they were the ones who made men into assholes in the first place.

you female creatures cheat us of money, time, attention and energy. leave us high and dry after you discover we don't meet up to your standards (financially, staminacially). when you girls leave we don't call you names.

girls caused men to be assholes. men were nice people until girls came along. Adam gave god his rib in exchange for Eve. What did eve do? she went to convince Adam to eat the forbidden apple.. if it wasn't for women we'd all be in heaven now...

Anonymous said…
So the Mighty Disappearing Man never answered the question did he? Sounds like he'd conveniently glossed over the question by philosophising the issue.

Perhaps if you had asked him a different question...

H: So babes*, have you been with a prostitute before?

H: [thinks] (Oh shit, does HE think I'm prostitute-like?? I'm so gonna blog about this!)

MDM: .... And then there are the girls who asked for money immediately after sex or they wouldn't go home, but they do have day jobs, so maybe, if you'd go so far as to call them prostitutes, then yeah...

*Pure fictionalism this. I seriously have no idea whether you call your guys 'babes'. Hur hur..

theresa said…
HELLO holly! just wondering, after reading some of the comments, whats your take on a one night stand? :)
10:07 pm

Anonymous said…
Well Holly...i think that what u've already spent on yourself is more than enough to be fuckable for way tooo many years to come... ha.. and i like what u wrote about paying the bill if that is going to be ur last date with whoever.. u've got a backbone.. guys... this girl's a good catch, attached or not ! ha.. =)
6:56 am

Anonymous said…
Hi Holly,
Heh just realized I could post like this as well, haha - I'm such a ditz when it comes to technology.

Anonymous said…
"if the guy REALLY likes you, he won't try to sleep with you on the first date." haha! honestly, that's BS. guys don't sleep with you on the 1st date, just bcos he want to make sure you are not a slut. actually guys just like girls, we don't want to be hurt as well. lol!
12:38 pm

I was browsing your blog, as I often do, and had to take protest against your latest posting about how guys (and girls) always end up paying for sex anyway.

If I am totally honest, I think it expresses a somewhat shallow and depressing view of what motivates a person, male or female, to date another person. The whole dating process is, or should be, about attempting to see whether you can relate to another person intellectually, emotionally, and spiritually... which holistically should lead onto a sexual union. To do this practically, it involves spending money to create a time and space conducive to exploring these potential relational aspects. In other words, one or both of you is going to have to spend some money on dining out, seeing movies, and buying nice things to boost one's initial confidence etc.

The instruments of the dating game may cost money to employ, and a loving, sexual relationship may ensue hopefully, but the costs incurred during the dating process should not constitute a hidden financial agenda to simply get laid. If that is the case for either party, then something has gone kinda wrong. Unless of course, the dating process has just been a short lived charade for getting into bed with one another. In which case, then your postulation holds some water. But hopefully that is the exception rarther than the rule.
1:09 pm

Anonymous said…
I prefer instant gratification.. paying for sex is better than spending for the date on dinner+movie and end up the girl waving you bye, and not even a kiss.. this is 2008
3:29 pm

Anonymous said…
Losers,,think u can get to know her by leaving comments on her thought...acting as sensitive guys???
8:50 am