I'm surprised they managed to dig out a pic of me from 8 years ago... from their archives!

But the piece was about blogging and having been a teacher and my opinions on how the two mash.

I'm just pleased that the writer didn't mangle or manipulate my opnions, hardly any deviation from what i said. That's great.

CLICK HERE for the online version. (Thanks to my anonymous reader who sent in the link)

The online version of article is no longer available. I should have saved a screenshot, but I didn't. So, here's a scanned copy sent in by reader Nath (thank you!). 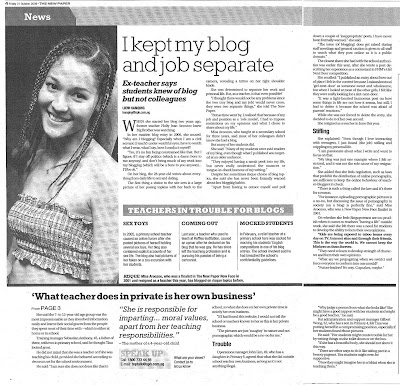 I kept my blog and job separate

In her maiden blog entry in 2006, she mused: 'Why am I blogging? Especially when I am a civil servant (I teach!) under watchful eyes, have to watch what I wear, what I say, how I conduct myself?

'Yes, it's no fun being constrained like that. But I figure, if I stay off politics (which is a damn bore to me anyway) and don't bring much of my work into my blogging (which will be a bore to you anyway)... I'll be ok.'

On her blog, the 28-year-old writes about everything from daily life to sex and dating.
The first thing a visitor to the site sees is a large picture of her posing topless with her back to the camera, revealing a tattoo on her right shoulder blade.

She was determined to separate her work and personal life. But, as a teacher, is that even possible?

'I thought there would not be any problems since the two (my blog and my job) would never cross, they were two separate things,' she told The New Paper.

'But as time went by, I realised that because of my job and position as a 'role model', I had to impose restrictions on my opinions and what I chose to share about my life.'

Miss Aroozoo, who taught at a secondary school for three years, said most of her colleagues didn't know she had a blog.
But many of her students did.

She said: 'Many of my students were avid readers of my blog, even though what I published was targeted at an older audience.

'They enjoyed having a sneak peek into my life, but never really understood the nuances or tongue-in-cheek humour of my writing.'

Despite her sometimes risque choice of blog topics, she said she has never been formally warned about her blogging habits.

'Apart from having to censor myself and pull down a couple of 'inappropriate' posts, I have never been formally warned,' she said.

'The issue (of blogging) does get raised during staff meetings and general caution is given to all staff to watch what they post online as it is a public domain.'

The closest shave she had with the school authorities was earlier this year, after she wrote a post describing her experience as a contestant in FHM's Girl Next Door competition.

She recalled: 'I published an entry about how out of place I felt in the contest because I misunderstood 'girl-next-door' as someone sweet and wholesome, but when I looked at most of the other girls, I felt like they were really looking for a slut-next-door.

'It was a light-hearted humorous post on how some things in life are not how it seems, but still, I had to delete it because the school was afraid of parents' reactions.'

While she was not forced to delete the entry, she decided to do it of her own accord.
She resigned as a teacher in June this year.

She explained: 'Even though I love interacting with teenagers, I just found (the job) stifling and crippling my personal life.
'I am passionate about what I write and want to focus on that.

'My blog was just one example where I felt restricted, and it was not the sole cause of my resignation.'

She added that she feels regulation, such as laws that prohibit the distribution of online pornography, are sufficient to keep the online behaviour of teacher-bloggers in check.

'There is such a thing called the law and it's there for a reason.

'For instance, uploading pornographic pictures is a no-no, but discussing the issue of pornography in society (on a blog) is perfectly fine,' said Miss Aroozoo, who was a New Paper New Face finalist in 2001.

On whether she feels Singaporeans are too prudish when it comes to teachers 'having a life' outside work, she said she felt there was a need for students to develop the ability to form their own opinions.

'Kids are being exposed to taboo issues every day on TV, Internet sites and through their friends. This is the way the world is. We cannot keep the blinkers on them forever.
'They need to learn to develop strength of character and form their own opinions.

'What are we propagating when we restrict and force everyone to conform into one mould?
'Future leaders? No way. Cupcakes, maybe.'

Unknown said…
read about your blog in the newpaper. got interested and went to reading it.

you really do have a talent in writing. but i guess you know that already.. ciao
9:13 pm

DK said…
Personally, I think they over-reacted. It's just a bikini. Ok, it's mini bikini. But she is still well covered.

Holly Jean said…
Yeah.. I agree DK... I really don't understand why this country makes it out like she should be ashamed of herself!

raviraj said…
It’s a good topic. I would like to read more about your articles.That contains nice information....Thanks, informative site, i try it later.....