on May 09, 2008
What you see on my messy desk is Why Men Marry Bitches by Sherry Argov. 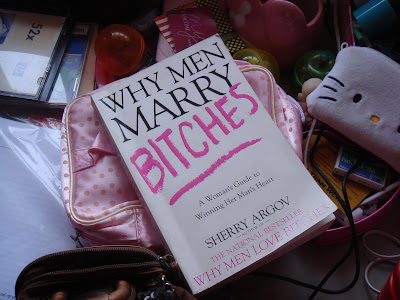 I read this book a few months ago. It's about empowering yourself and not being a whiney girly girl... it's about playing your relationship cards right, and this involves some manipulation and ultimately being a strong woman who knows what she wants, and won't stand for bullshit.

She told of this one woman whose husband had the habit of having a regular stopover at the pub after work instead of coming home for dinner. And this woman would nag and whine and cry and do all those other things that women do to just make things worse... but it only kept the man out more often. Then one day, she became the bitch and when he didn't come home for dinner, she packed a bag, switched off her cellphone and went for a holiday ( I think it was Hawaii) for a week.

When she came back, apparently he had been so worried and clueless... that he stopped this habit of having drinks sraight after work and came home.

Now I'm thinking... this is disasterous advice. I'm all for revenge... I get satisfaction from giving someone their just desserts. But once you dish out the dessert, you will salvage your pride and feel like a vigilante... but your relationship is ruined. I know that that is not the way to make a relationship work. WHAT?? Scare/Shock the man into coming home to you? WTF??

Why would I want that? I wouldn't stand for having a shit man... but I also wouldn't want a man who obliges simply because he's scared of consequences. In other words, chicken shit.

As with most self help books I read... I wouldn't follow her advice... I tend to be resistant to change especially if it's a change I don't like making. ( so shoot me....).

But it was a good read nonetheless because Argov is such a comedic writer and it is, beneath all the bullshit advice, quite interesting... especially the section on Breaking into the Boy's Club: Stolen Secrets--All the Highly Classified Things Men Will Share Only in the Company of Other Men. This is where men reveal their insecurities, and tricks they use to test women....