Not Jiggy with This

I don’t have a say in this I guess because I don’t have alopecia (and some say... neither does Jada Pinkett Smith. Don't know, can't confirm this) and the joke wasn’t about me starting in GI Jane 2 (bahahaha).

But I have to say, in terms of roasts…. It was bloody mild la! Wtf

Some might say, eh. Medical condition, cannot joke, off limits. But come on, let’s have some perspective here. It’s alopecia, not cancer ah.

Jada posted before the show that she loved her shaved look and didn’t care what anyone else thought. So who would have thought she would find a GI Jane reference so offensive (Demi Moore bald was so hot!).

Also, Jada seems capable of growing hair, we didn't see any smooth bald patches. If being bald was such a bad thing to her, then she could have just styled her hair to cover up the tiny area that alopecia affected, no? Perhaps she likes the look, it is edgy and does suit her.

People who are up in arms and saying Chris Rock deserved to be slapped for a joke that made fun of a medical condition.... Tell me you’ve NEVER laughed at a Stephen Hawking joke before? Or a Magic Johnson AIDS joke? How come their families didn’t go up on those comedians stages to slap them or into you homes to slap you? Is it they don't love them and don’t want to defend them????

By your logic, they would have the right to, correct? Plus in the realm of medical conditions, I feel Motor Neurons and HIV trumps alopecia. So how come Stephen hawking jokes are funny ? And why didn’t the man take offence to them (while he was still alive )?

If Chris Rock really wanted to be brutal and “bullying” and disrespectful.  He could have had jokes like these instead: 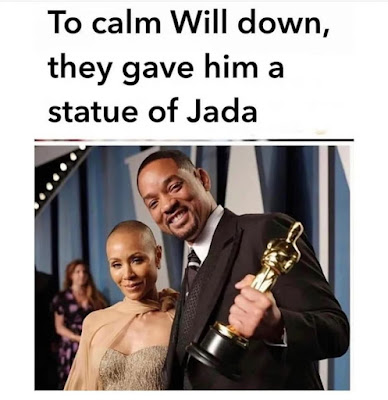 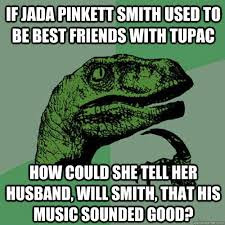 But he just cracked some mild (kinda boring and not that funny) GI Jane joke instead. Come on. Jada is bald. Jada was wearing an awful dark army green dress. GI Jane is hot and strong and impressive. How is it insulting?

If you want something insulting and offensive… his punchline should be along the lines of- When will you be in GI Jane 2? Oh wait, prob not since you (and your son!)  can’t act! Bahahaha

But regardless of whether Jada can take a joke... or not. Will smith slapped Chris Rock over it. She did not. So we can't blame her for what transpired.

However, I'm damn turned off by her reaction. She seemed to enjoy that altercation immensely.

It does seem like she was laughing which is as disgraceful and disgusting as the slap was. Instead of being shocked. Her head jerked in a laughing motion, it appears she was extremely satisfied with what Will did.

Also, their marriage is seriously not good ah. This woman watched him slap Chris Rock and didn't stop him from this career suicide, she didn't try to calm him when he sat down.  It took Denzel Washington, Bradley Cooper, and Tyler Perry to talk him down from the ledge.

Then the two of them were both ecstatic for the rest of the show, thoroughly enjoying themselves…

My heart twinged. Seeing Chris Rock try to maintain composure on stage. People went to Will smith during the break to give him a hug or pat on the back. People shaking his hand. But what about poor Chris Rock? Wtf  you’re enabling / rewarding a man who just assaulted someone!

Please he was not defending his woman. Protecting the one he loves. She was not in any immediate danger to the point where Will Smith needed to step in so suddenly and violently right on stage at the live telecast of the OSCARS.

They were at the Oscar’s where the hosts are comedians who roast their high profile guests for the night. It’s part of the job and expected. Cannot take a joke, then better stay home.

Want to defend also… You need to defend in an appropriate way. Escalating physically over words is not appropriate. For normal people the first one to hit is the one going to jail.

If Will had not over reacted in the epic way that he did... we wouldn’t even remember that GI JANE joke 5 minutes after it was said, let alone until today…

Kuen said…
I keep mixing up Chris Rock with Kevin Hart then wonder how come sometimes Kevin Hart is so annoying haha.
10:11 pm