The Childish Relationship: On Again Off Again

on March 05, 2020
Are you in an on-again-off-again relationship? Is it healthy to carry on this way? Will it eventually get you anywhere? 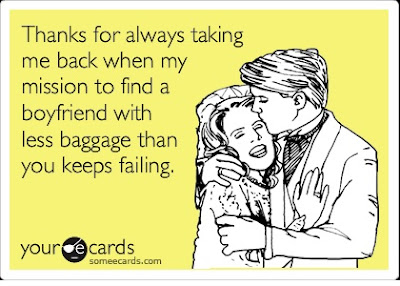 First you need to ask yourself damn honestly... When you split up with your other half... what are your (or their) intentions?

Is it to get a reaction? To instill fear? You are unsure if they're worth your commitment because there might be something better out there for you? Or have you really had enough and realise that this person is not who you can be with long term?

The first 3 reasons listed above are very childish and something you expect out of an entitled teenager playing relationship power play games. Unfortunately, many of us do not outgrow this habit... and we take this toxic behaviour into our adult relationships too.

Breaking up is fine. It's not wrong. Everybody... and I mean everybody makes mistakes when trying to find love. You might have to kiss a lot of frogs before one turns into Prince Charming. That's fine.

But to engage in a cycle of on-again-off-again in a relationship is downright immature, don't you think? Now, I can understand, there may be some level of indignance if you're reading this post and you're in such a relationship. You're probably huffing at my post, thinking- SHE DOESN'T UNDERSTAND MY RELATIONSHIP. THIS ONE IS DIFFERENT.

... but honey, it's not different, or unique, or special to warrant such a tumultuous (aka insane) relationship trajectory.

Break ups. If you don't mean it, don't threaten it... *smh* and especially don't do it repeatedly.

I've only ever patched up with an ex (it was Mark) once in my entire relationship history. And even then, we were dating for a whole year or so before splitting up. And were split up for 4 months before giving it a second shot. I really don't understand couples who are like... today break up, tomorrow patch back and then next week break up again. Like wtf. Do your relationship decisions have any gravity at all ?

Anyway, back to my only experience of getting back with an ex. It was good for like 2 weeks, because there was this old feeling of familiarity, but then it became worse than before. Then we saw it through for a couple of months before mutually calling it quits... actually I don't know why he wanted to give us a second try, he was quite a selfish unattractive person the second time round. Wasted my time and my potential relationships with other suitors. -_-

It's the only way to re-ignite
One is that the couple's love fades over time, they start putting less effort in the relationship. And the easiest way to get out of the rut and reignite the relationship is to shake things up, throw things off kilter with a split up and make up again. It's a roller coaster of pain and passion.

There's no respect
If there's always one instigator calling the shots. Instead of working towards any compromise or making the relationship stronger with you... They just want you to feel 'the loss' when they dump your ass and then you change whatever it is that they don't approve of before you come crawling back. Worse still is you come crawling back pretending to have changed but actually you know you gonna pull the same stunts all over again. Hahahaha . WTF.

If you want to commit, you commit. If you don't, you walk away. But going back and forth is just a basic lack of respect to the other person.

Ultimately these patterns gives way to a final break-up. It's just a matter of how much time you want to waste first?

Anonymous said…
Hey holly great post, very informative ! Can I just ask why did you get back together with your ex ? Why try to give it another shot when it didn’t work out the first time around, (unless you got bored with each other? )Cos I feel like you’re quite stubborn/ headstrong and you won’t go back to someone unless there was a very good reason, like he was marriage material or smth.... but then if he was , why break it off in the first place?
2:04 am

Holly Jean said…
The first time we broke up. It wasn’t mutual. He dumped me. I was upset but did move on and dated others. But then we decided to meet up some 4mths later for lunch. I tot I had loved on and it wld be ok. But Wah. The meet up was like both of us felt some kind of euphoria or what. Like we so enjoyed each other’s company and missed it. Next day he asked to try again and I agreed . Mistake on my part Cos we didn’t change so it won’t work. Worse still is he became worse than before lol
7:09 am

Anonymous said…
Omg sounds horrible, seems like quite a devastating breakup ! I remembered reading your blog and you said he was your best relationship/bf/ buddy and how you both had such huge plans for ur relationship back then and how u felt the happiest with him and I legitimately thought something was gonna happen...how did something so “good” turn sour so quick sia... smh men ... what was his reason for the 1st breakup ? Can you do a post about how to tell if your significant partner has started to get cold feet? I love your perspective on relationships and how frank you are. Definitely one of my fav bloggers

Holly Jean said…
I think the first break up, he just started feeling stifled and trapped . Like the same things I did which he used to adore, became annoying ... that sort. Maybe he had a change of heart. I dunno for sure. Can only go based on what he told me.

Anonymous said…
Hey holly saw you to be addicted to eyelash extensions around 10 yrs ago, so you still do them? Any recommendations for where to get them done? I see you don’t really do them now why the change, were you just doing them for aesthetics then to please your me counterparts? Are they Super bad for your lashes too ... a little clueless about them here and I’d love to get them done
3:02 pm

Holly Jean said…
Yah a decade ago. I had eyelash extensions. For a year or so , kept doing. But when I finally took them off without redoing new set... omg my lashes bald. Took a year plus to grow back even using mavala lash serum etc. 😫

Now my lashes are normal again but I don’t think I will do extensions anymore. Even though now a days the technology better I Guess and less harsh on the lashes... but now is... I don’t have time to maintain extensions, the touch ups etc. Really cannot. Cos who watch my toddlers while I go do such stuff :/. So yeah I rather spend that time playing/ teaching them.

When I feel like having longer lashes I stick on lashes. Currently liking DUO black eyelash glue and some china made lash strips I bought from tabao lol
10:01 pm

Anonymous said…
Hi Holly, my bf and I have gone through a similar situation, we both broke up and then we decided to meet again and it was so fab. But like now that we’re tgth again it’s a bit shit haha. He’s Super selfish and horrible to me, always bossing me around telling me what I can and cannot do. Like he say he’s suffocated .Is this what you went through with your ex as well? How did you find the willpower and strength to break up? I love him and he’s Super good for me on paper la, he’s rich, smart good looking, but kinda selfish. Was ur ex like dat too? It’s so sian. Now that you’re in a good relationship and you look back do you think your decision to leave was wise? Or what. Sigh .
1:56 pm

Holly Jean said…
When we got back again it was good for only a very short while. Most People don’t change I guess .

But good decision to get back (for one time) because that made me learn and realise that nah it’s shit hahahaaa Otherwise I might be wondering today - “what if”
4:04 pm