on February 07, 2018
It's 5 am now and I can't sleep so instead of scrolling through my facebook feed while in bed and trying to fall back asleep, I thought I might as well get up and get my day started. Which is a good thing I did, cos once Myla wakes at 8am, my day is pretty much consumed with her, some errands, cooking prep and housework. So I have a good quiet few hours to blog and also get my MyFatPocket column drafts done.

Here's Part 2 of some of the most epic downers I experienced in the past when dating.

Oh man, this dude tried to play me. Sure, this happened at a time when I was Parallel Dating... but at least (I feel) I was always upfront about this. It's quite different from someone (him!) who says they're only in to you (gush gush gush) and totally not interested in dating anyone else... but actually in secret, them is scumbag. lol.

It was a very fun start. We met through the internet. He was a new expat in Singapore and reached out to me as a friend who could help ease the transition. Fair enough. I even made it clear I was dating some other people. 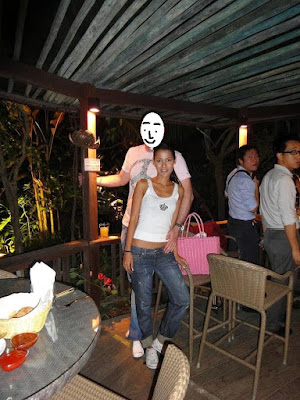 But he very quickly switched gears into relationship mode.. or at least was trying to head that way. Which then made me sit up and notice, and think hmmm hang on, maybe there is something here. As it progressed, I even started taking him to my (blog) work events which I had lots of at that time.

Dude, if you still wanted to play the field, you could have left things as they were, instead of being all fake and wanting exclusivity.

Oh oh oh, yeah ok I get it now, I think you just thought you could get me to stop playing the field and give you exclusivity... while you continue flapping your dick about that field since I'm no longer on or even near it so I won't know. pffft... you need a lesson in covering your tracks, I dated some who were masters at this lol, I'll hook you up.

The first time a red flag was raised, he messaged me on a Friday evening saying he had just found this expat club meet up for drinks and networking thingy... in town. Bit odd because since we met, we would have drinks in town practically every Friday evening. And he didn't ask me to come along, or suggest we could meet up for supper after.

And when I mentioned the non invite (while he was already at the session), he said, "Oh babe, I didn't know you were not doing anything tonight and could have come. You can come if you want."

But I didn't go, because... so last minute and I live in Pasir ris, it would take me an hour to get there and it's already like 11pm.

Well anyway, the next morning we were headed to Batam, so we went to the ferry terminal... but missed our ferry and couldn't get another one that morning (Good!!!). While seated at the cafe in the terminal having breakfast, he kept looking at his phone and smiling.

I (genuinely) thought it must be some funny meme so I asked what it was that was so funny. And he said, "It's just a girl from last night."

YOU ARE KIDDING RIGHT?

So it turns out, she's just a new 'friend' he made from the expat networking thing. And she's Singaporean Chinese (why on earth she attending an expat networking session?). Then he also qualified that she's not pretty (oh so that makes it ok).

And the cherry on top... well he pulled out my camera which I lent him, and showed me a picture he snapped of her on the dance floor. Can't really see clearly, because funny strobe-ish lighting... but by no stretch of the imagination was she like a walrus looking woman or what.  -_-

OK great, now he has a new 'ugly' female friend whom he texts and smile while he's out with me. Let's just wait and see how this plays out.

Thankfully it didn't take long for the next (and final) red flag to surface. The following weekend, he was out for Friday night drinks again... it was a work thing. And I made my own plans, because he told me before hand he had this work drinks thing. So... all good.

And then he texts me at like 11pm, quite early. To say he's back home already and going to sleep. So nice ah this guy, go home so early plus text me some more to inform me (I never asked for him to do so btw).

The next day... I'm at his service apartment (he hadn't found permanent dwelling yet), and he was still getting ready to go out. So I waited by the doorway (he was almost ready anyway so like no point I go right inside to have a seat). But in those very few minutes, a receipt on the sideboard table next to the front door catches my eye. It's very long, and sitting right by his wallet and keys. I pick it up and look at it. It has some cheena club sounding name on it like Dreamz something or Paradise something.. (I don't remember anymore la). And the time stamp on that receipt was 4am. So he was there.. in his sleep?!

I google it later on and it was some dodgy KTV place. The kind with hostesses and GROs who sleep with you cos lots of men on Sammyboy forum was recommending it. (Is this sammy boy forum thingy still around?)

Well, anyway, that was how that one ended. Hate getting played. Ugh!

P/S- Last i heard from him, he's married to a Singaporean Chinese girl and they have 2 kids. Actually they got married quite soon after we stopped dating (I think it was within a year). I forgot to ask if it was the walrus from the expat drinking session. Lol! Kidding, no hard feelings :)

Anonymous said…
Something dodgy about the way his hands are placed on you. They look so heavy and weighing down on you...
5:40 pm