on February 03, 2018
Just a bit of light hearted sharing. I've long been over all of this because it happened many years ago when I was single and dating, but I was just thinking about some of the real downers I experienced in the past when dating.

You know when you first start to date someone, there is so much mystery but you start seeing all the potential in that person/date/relationship. And then more often than now (actually almost every fucking damn time lol), you find out something about your date that is a big red flag. It is sudden potential obliteration.

Here is part 1 of 3... of my 3 most horrible red flag revelations I experienced in the past. Part 2 and 3 coming in the next few days.

I have no pictures of the actual dates to share but I came across a photo of what I looked like exactly during that period. I remember this was also a phase of too heavy eyelash extensions. Tsk! 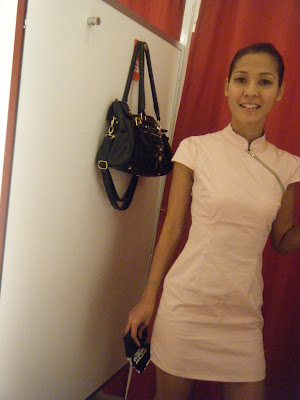 Part 1: Sebby
I just made this nickname up on the spot to protect his actual identity. Our first date was at East coast parkway, at a cafe where we had drinks. He shared with me that first date that he used to be very fat (obese) and he had lost a lot of weight recently through exercise.

He showed me his past photos (really damn fat). At first I thought oh no, he lost so much weight so quickly, with his clothes off he's going to look horrible with excess skin over hanging and flapping etc. Bahahha so shallow of me I know.

But I still gave him a chance ah. Cos conversation was good and he came across as a nice person. So he invited me to go see him at some triathlon or something. And I went. And was pleasantly surprised to see that eh actually his body very nice and fit ah. Not loose flappy skin kind.

He impressed me, transforming from a morbidly obese man to an actual Iron Man competitor (that takes a shit load of determination and willpower). He was a gentleman and had a kind disposition. All great right??? That would make you giddy with anticipation wouldn't it?

He invited me to his apartment for dinner. He came to pick me up, he said to bring my (precious) dog Lola whom he took to very well (wah still racking up the points ah).

At his apartment... 2 downers.. one is small matter la. He cooked using a lot of Thai fish sauce... I don't like cos I find it smelly. But no biggie la.

Then the second downer... he was showing me around the apartment. One of the rooms was a little girl's room... pink and with dolls etc. And I said, awww, it's sweet that you have a room for when your niece visits. Cos he did mention during our previous date that his sister has a child.

And he said no, it's his daughter's room. He's married.

What the Fuck la!

........... but, he explained to me, that his wife and him have separated. She went back to Thailand (she's Thai) with the daughter (she was around 3 yo then). AND... AND ... AND... the reason they split was because he finally found out through DNA testing that his 'daughter' wasn't actually his.

I later saw a photo of the girl, she looked 100% Thai. This guy was white. So his family and friends kept hinting that the kid not his. I don't know why he waited so long before finally testing (either I can't remember the reason or I forgot to ask).

So ok lah, this kind of story. You cannot write a person off right? It's kind of poor thing even. So I decided to keep dating him.

Couple of dates (or so) later, he was away from the table (maybe toilet or went to order food), his phone was on the table, face up. I saw a message come in. From his ex Thai wife. And it didn't sound like they were separated. More like we miss you, see you soon dear, type of message. -_-

I didn't ask him about it. But I started getting skeptical about this guy. Then after this date we went back to his apartment to edit some photos on his laptop. I can't even remember what photos they were lol ( I suspect something like some athletic competition photos). Then I wanted to transfer to his laptop and his place was close by. So we went, he left me in his study room with the laptop... I uploaded the pics for him. And then I couldn't stop myself from snooping.

So yes, that was how it ended. I shut the laptop down after doing the necessary photo work etc. And said goodbye like nothing was wrong. And just stopped seeing him...

Anonymous said…
I used to be an spg as well, dated only white guys lol (now I am happily married to Canadian chinese haha). I realised white men (especially Americans), they have many hidden dark disturbing secrets. Since then I banned myself from dating white guys lol
11:25 am

Anonymous said…
I saw your FB. Previously u was with a white with a hand a daughter with him. Where is the white guy? U guys broken up?
9:35 am

Holly Jean said…
I’m not sure who u referring to... my ex Husband? He is white. He is not in Singapore. We are divorced.
8:41 pm