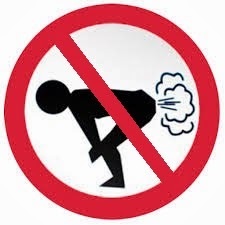 You know how some times you think you really cannot live with something... like it's an absolute deal breaker. Rethink it. Is it really THAT big a deal?

You see, years ago... I was on a second date with a really nice guy. It was a pool party. Things were going very very well. Then it happened.

Ok picture this... We're seated talking by the poolside, there was a toilet not far behind us (the handicap type, where it's just one cubicle). No one was close to us, they were by the BBQ pit, it was such a quiet night.

Then half way, he excused himself as he needed the restroom. All fine. I was still seated there sipping my drink, waiting for his return (I thought he went for a quick pee).

Then I heard it. Like he sat of a huge whoopee cushion and burst it. And I thought- it's ok, I'll pretend I didn't hear anything when he comes out. But then it continued, on and on for a good 4 or 5 farts. And after some of the bigger farts, I could hear him grunt "Oahhrr!"

I was very embarrassed. How am I supposed to pretend I didn't hear ANY OF THAT when he comes back out?!

I panicked and jumped in the pool. So when he came out, he would think I had been in the pool the whole time so I couldn't have heard anything. But I didn't go out with him again.

However, after many months of dating guys who took quieter shits but were such asshole characters... I started to think maybe I had been too hasty by dropping him simply because of one loud poop. So I contacted him again, just to see how he was doing... and I found out he had a new girlfriend. :(

Then to make it even worse, a few months after that, I found out from a mutual friend that he married that girl!

I went on to have a few more failed relationships and many bad dates. Every time I thought back to that time, I kicked myself. I could have laughed it off, made a joke about it, or just plain ignored it. But I chose to make it a deal breaker.

Of course I don't do that anymore because I did eventually find my happily ever after. It's 11pm at night and my husband is blasting the music while I'm sat here blogging and slightly worried that the neighbours might come knocking, asking us to lower the volume.

Plus he is a champion farter. (Every night when he farts and pulls the bed covers over my head, I think it's just karma reminding me what a superficial fool I was in my youth)

But I love my husband and he makes me happy.

So do evaluate your deal breakers, keep the ones which are important to you and drop those criteria that honestly don't mean jack shit when it comes to the grand scheme of things.

tammy said…
oh i really love your writings! ney, everyone has a past.
yes it's sad but true, sometimes all it takes to shape us up is just a poo of thought. it changes destiny, fate and where we go in future.

Theresa said…
Happy Anniversary Holly! Have been reading your blog since 2007! So happy that you've settled down and found your happily ever after!
4:06 pm

Anonymous said…
I guess my guy is not the only one who pull the blanket over my head after farting. HAHA
11:53 pm