on September 17, 2013
My article on MyFatPocket last week was about The Witch. - Watch Out Girls! A Witch is After Your Man! It's about women who would go after men who are attached. 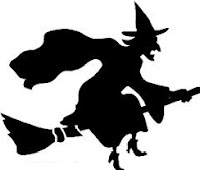 But the thing is.. there are plenty of He-Witches out there too. I've come across so many.

I've had male FB 'friends' who, despite seeing my wedding pic as my profile pic, still ask me out. Even if it's 'just as friends'... it's just an odd request... (we are not real life friends from the past or anything like that).

But what I find annoying are the men who make remarks and comments (not in public but in private messages to me) putting my husband down. For instance.... if I make a comment on my wall about lugging back heavy supermarket bags. Then some guy will message me saying, if they were my husband, they would never let me run supermarket errands etc. They would do it for me.

Then there are those guys who try to make me feel like I am missing out because I am not with them. For instance... first class travel, great dinners.... they think they're so smart by slowly trying to plant seeds in my brain.... but I'm really just chuckling at them behind my computer screen. I'm not the least bit keen buddy!

It worked on me once before... the He-Witch. I was dating someone else... and I was speaking to a guy friend of mine (a real life friend, not facebook friend. I didn't realise he was a he-witch). Then I started confiding in him about my boyfriend at the time... (he didn't want me to come along when he went away for Christmas AND newyears AND his birthday, all in 2 weeks. And he didn't see himself settling down for another 3-5 years). The He-Witch started telling me about how he would always want his GF with him around special occasions... (made me think... awwww)... and how he wanted to settle down real soon. It kinda got embedded in my head.. hey, I'm with the wrong guy!

And when my BF and I split up (because I really started to look at him as someone undesirable... esp when just out there is a guy so perfect)... He-Witch swooped in for the spoils. And guess what? All that talk was bullshit. He-Witch was one of the worst BFs I've ever had. Selfish, self-centred, no where near ready to settle for anything or anyone (he still isn't).... and he he didn't want me to go to his friend's Birthday Party in Hong Kong because his friends were a 'tough crowd' and very judgemental. Ah? Needless to say, we split up. Glad to say I've grown up since then.

If you have a friend who is always putting your partner/Bf/husband etc down behind your back... beware! Their ways are cunning, and they can actually manipulate you when you trust them.